Perhaps the best way for components targeted at industrial applications to connect to the Internet is to do so through Industrial Ethernet. The number and range of products that are Ethernet and Internet ready continues to expand.

Customers are indicating that the latest tool in competitive advantage will be use of the Internet of Things (IoT). It’s the lure of gaining real-time insights into every aspect of their business operations and anticipating market needs before they occur. The ability to know customer desires earlier than has been possible before could deliver a competitive advantage in the market place. 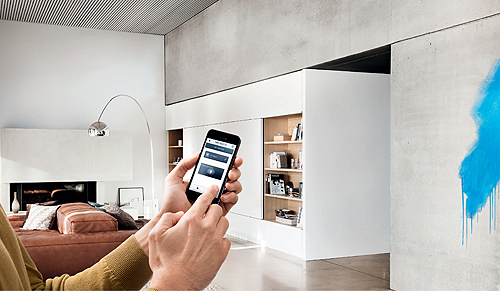 An international joint venture between ABB, Robert Bosch and Cisco Systems, called mozaiq operations, will develop an open-software platform for the creation of products that will enable various systems within a home to connect to the Internet.

Thus, there’s a rush to develop easily connectable products and the software needed to analyze all the raw data. Early developers of IoT products maintain that they have learned a few things that are necessary to a successful compatible product. For example, developers should consider making IoT products with multiple connectivity options and power consumption choices. Some developers offer 14 different wireless technologies. And developments in battery technology will be important to this industry, as many IoT applications run over batteries.

Complicating the development of IoT systems, though, is the issue of so many different protocols for communication among components. In addition, there is the need to blend hardware and software design philosophies and determine how these disparate systems will interface with all the potential protocols.

While a cloud service is another key element of an IoT application, there are no standards in the industry for cloud connectivity. The cloud needs the APIs that allow the physical device to communicate and deliver gathered information. In some cases, you can use pre-integrated silicon to a cloud service to build IoT applications end to end more easily.

Personal Area Networking (PAN) protocols are popping up, so gateways to Ethernet or Wi-Fi will be important, meaning you will need a TCP/IP stack. Here’s an area that requires a little research as some protocol stacks are cleaner and easier to use than others.

Data will have to be managed. In the automotive industry, for example, connected cars can generate up to 300 MB of data per second per car. You can quickly run out of bandwidth when moving that data across the Internet. And the price of bandwidth is not going down as fast as the price of storage and compute power.

One idea is to push intelligence to the data source so that sensors and control systems collect data at the network edge. Thus, sensors and edge devices will need microprocessors. Intelligence will help you parse out the data and reduce the amount sent to the cloud or to the file system or on the network.

An interesting recent development for the IoT home market is the formation of an international joint venture between ABB, Robert Bosch and Cisco Systems. This group expects to create products that will enable various systems within a home to connect to the Internet. The group goes by the name of mozaiq operations.

The companies’ engineers will develop an open-software platform for smart homes. The platform will help unify present stand-alone technology for home automation and offer interoperability across devices.

Once deployed, consumers will be able to seamlessly and intuitively tailor their appliances and devices — regardless of brand —to deliver control, comfort and significantly improve energy efficiency. For example, on an unexpectedly hot day, either from a click from a smartphone or through a pre-set instruction, blinds in the home can be closed; the preset timer for the tumble drier could be switched off; and all screen devices automatically switched off.

The mozaiq software platform should create opportunities for a range of new services by facilitating the simple, but secure exchange of data between different types of devices and their users. By creating a business ecosystem, ABB, Bosch and Cisco seek to facilitate cooperation and accommodate stakeholders’ varying demands and perspectives as the software platform is developed.

The interim head of mozaiq will be Dirk Schlesinger of Cisco Internet Business Solutions Group. He will be based in Frankfurt, Germany, until a permanent leader is appointed.

Rittal is helping companies participate in the Industrial IoT connectivity to reach Industry 4.0 integration by adopting the modular structures necessary to help smart factories stay functional. With Industry 4.0, data-controlled equipment and automated systems give visibility of what’s happening in the enterprise down to individual work cells, enabling staff to effect change and avert disasters when necessary. Companies without an Industry 4.0 philosophy are more likely to be forced to deal with the after-effects of outages and miscommunications caused by data disconnects.

Rittal’s entry into the Industry 4.0 era is designed to demonstrate an escape from the era of engineering in an isolated silo or vacuum. This is where bills of material are handed to purchasing, which is then expected to base its acquisitions on those documents. The factory floor and the shipping department then work off of the same stale information. In the Industry 4.0 world, if somebody updates information on the engineering side, everything downstream gets updated as well, with fewer errors, more rapid evolutions and easier changes.

Variations of Ethernet will be a major part of most IoT devices. For example, two licensed frequency data modems from Weidmuller offer long-range communications (up to 40 miles) to extend Ethernet networks into difficult-to-access locations. The features of these wireless Ethernet modems let you develop a network for high reliability, lower latency and deterministic power management. They support 360 to 512 MHz and 928 to 960 MHz configurations; can operate in Access Point/Client configuration; function as a network Bridge/Router; or serve as a Serial Server (RS232/485). 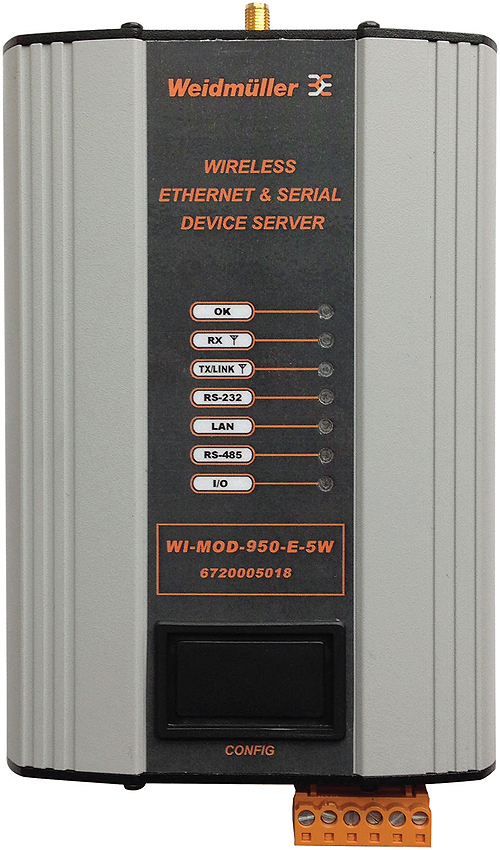 Frequency data modems from Weidmuller enable long-range communications (up to 40 miles) to extend Ethernet networks into difficult-to-access locations. The features of these wireless Ethernet modems let you develop a network for high reliability, lower latency and deterministic power management.

The modems have node-to-node deterministic mesh network repeatability for extended range, and multiple channel spacing options to increase network scalability. They handle throughputs of up to 25.2 kbps for secure wireless communications in outdoor environments and over obstructed paths—typical of remote monitoring and control applications. The integrated Modbus server capability integrates with smart sensors, RTUs or I/O expansion through the use of expansion modules.

The modems integrate with Weidmuller wireless and wired networks to connect remote sensors, actuators and instrumentation to mission critical monitoring and control systems for industries that include oil and gas, water and wastewater, mining and power generation.

The modems operate in an extended temperature range of -30 to 60° C (-20 to 140° F), deliver secure industry standard encryption of 128bit AES, 802.11i with CCMP, WEP, WPA2, and include ATEX/IECEx hazardous area approval. DIN-rail or wall-mount options are available for easy installation.

On an assembly line developed by Bosch Rexroth in Homburg, Germany, more than 200 different hydraulic valves were assembled into a single value stream. Using an RFID Chip on a work piece, the nine intelligent stations on the line recognize how a finished product should be assembled and, accordingly, which operational steps are necessary. Displays show personnel the appropriate working instructions for the version that is to be processed. “The assembly line integrates human, product and machine under conditions of flexible mass production,” said Frank Hess, plant manager at the Rexroth plant in Homburg. “Using this, we can economically manufacture a multitude of custom products down to batch sizes of one.” The Internet 4.0, also known as the IoT, can be used to analyze processes and reduce inefficiencies. For example, on an assembly line developed by Bosch Rexroth in Homburg, Germany, more than 200 different hydraulic valves were assembled into a single value stream. The now intelligent stations on the line recognize how a finished product should be assembled and, accordingly, which operational steps are necessary.

In the planning and implementation of the assembly line Bosch Rexroth primarily used its own products and systems. The specialist for drive and control system link open automation approaches with its own intelligence.

In large-scale machine production, expenditures for replicating controller configurations can be a significant cost factor. Traditional control cabinet wiring offers flexibility and extendibility, but is often not required when manufacturing hundreds of essentially identical machines. Manual wiring of mass-produced machines is a common source of errors and causes high labor costs.

EtherCAT plug-in I/O modules from the Beckhoff EJ series are an efficient way to implement platform concepts in large-scale machine production. The EJ series offers many common components while maintaining the possibility to configure different variants. These “plug-in” modules include the functions of the EtherCAT I/O system, yet they can be directly attached to circuit boards. 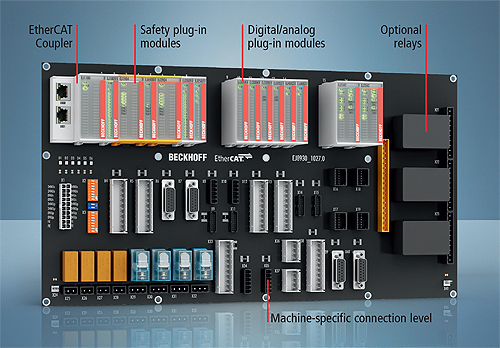 EtherCAT plug-in I/O modules from the Beckhoff EJ series are an efficient way to implement platform concepts in large-scale machine production. These “plugin” modules include the functions of the EtherCAT I/O system, yet they can be directly attached to circuit boards, speeding the development of IoT systems.

In combination with industrial-grade cable harnesses, the signal distribution board—a circuit board specially designed by the user or by Beckhoff Automation application engineers—distributes signals and power between EtherCAT plug-in modules and the machine. Unit costs can be lowered through the automated production of circuit boards and cable harnesses—the higher the production volume, the greater the savings. The risk of incorrect wiring is reduced since the EJ series EtherCAT plug-in modules and the plug connectors on the cable harnesses offer convenient coding options.

The entire range of functions from Beckhoff’s EtherCAT I/O portfolio, including functional safety solutions, can be implemented in a compact form factor with the EJ series. Board level pluggability enables a nearly limitless combination of options, which can be selected and added as needed. In addition, the EtherCAT plug-in module system is simple to maintain because it leverages standard, globally accepted industrial Ethernet technologies.

The magnetic encoders provide 12-bit accuracy and dynamic response. Based on magnetic measurement technology, these devices operate reliably in wet and dirty conditions with shock loadings of up to 300 g. Multi-turn models have a range of up to 65,536 revolutions, provided by a self-powered revolution counting system that keeps track of absolute positions under all conditions.

The TBEN-S series from TURCK consists of compact, digital block-I/O modules. The fully potted IP65-, IP67-, and IP69K-rated modules are 1.25 x 5.6 in. and allow assembly directly on the machine. They fit applications with a temperature range from -40 to 70° C degrees. It can be operated without additional gateways in each of the three Ethernet systems: Profinet, Modbus TCP or Ethernet/IP. Additionally, thanks to multiprotocol technology, the devices recognize the used protocol automatically by listening to the communication during the start-up phase. You can use these devices in line topology. 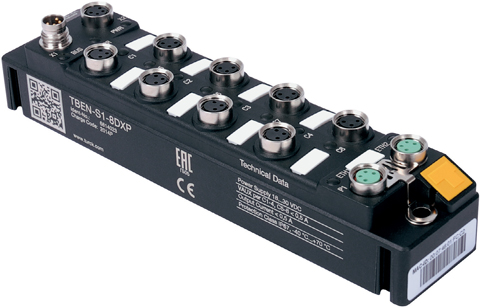 The TBEN-S series digital block-I/O modules from TURCK recognize a used protocol automatically by listening to the communication during the start-up phase. Each module can be operated without additional gateways in each of the three Ethernet systems: PROFINET, Modbus TCP or Ethernet/IP. 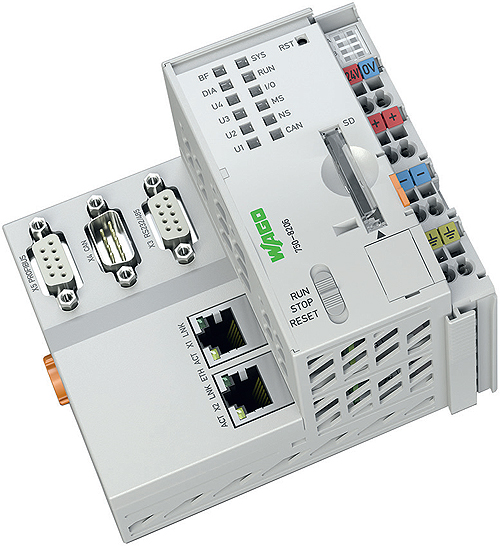 The PFC200, from Wago, acts as a fieldbus gateway to communicate
between Modbus TCP/UD/RTU, CAN, Profibus, Smart Grid and RS-
232/RS-485, eliminating the need for third-party converters.

The PFC200, from Wago, acts as a fieldbus gateway to communicate between Modbus TCP/UD/RTU, CAN, Profibus, Smart Grid and RS-232/RS-485, eliminating the need for third-party converters. You can further simplify configuring fieldbus networks with the company’s I/O-PRO programming and visualization software tool. The gateway features multiple fieldbus ports; a high speed processor 600 MHz ARM Cortex A8; 256 MB of onboard memory and 32 GB of removable memory.