The ComfilePi CPi-A150WR is a Raspberry Pi-based industrial PC with a 15-in touch-panel display. Leveraging the compact, ubiquitous Raspberry Pi 3 board, the ComfilePi CPi-A150WRinherits the Raspberry Pi 3’s 1.2-GHz 64-bit quad-core ARM Cortex-A53 processor, a Broadcom VideoCore IV GPU, and 1GB of RAM. The new, larger version has the same capabilities as its predecessors with smaller screen sizes: the 7-in. CPi-A070WR and the 10.2-in CPi-A102WR. All models in the series now support AdvancedHMI software, based on the .NET framework, which uses the popular Visual Studio design environment. AdvancedHMI enables the creation of HMIs that are not possible with other off-the-shelf packages. It creates a true, fast executable for the Linux-based ComfilePi.

The CPi-A150WR’s display is a 24-bit color LCD with a resistive touchscreen, and the controller itself provides 22 ESD- 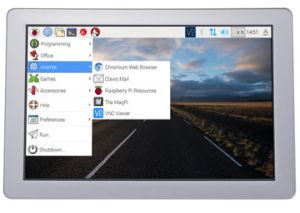 The CPi-A150WR is housed in a flame-retardant ABS enclosure with an IP65 water resistant front pane and is specified for an operating temperature range of 0 to 70°C.

The Raspberry Pi is a revolutionary, compact single-board computer which typically runs the Linux operating system, but the ComfilePi can be programmed in almost any language, including C, C++, Java, JavaFX, Javascript, python, C#, vb.net, and even emerging languages such as Rust, D, and Nim, as well as .Net Core 2.0 applications. (Android and Windows 10 IoT are not supported.) Due to the built-in Broadcomm VideoCore IV GPU, the ComfilePi can even render real-time 3D graphics. CODESYS can be used on the ComfilePi by installing one or more of the CODESYS Raspberry Pi Control Modules. CODESYS is a development environment for programming controller applications according to the international industrial standard IEC 61131-3.