A decade ago, while still a Ph.D. student at Cornell University, Zac Manchester imagined building chip-scale satellites that might work together to study Earth or explore space. On June 3, as NASA Ames Research Center announces the successful deployment of the largest swarm of ChipSats in history, Manchester, now an assistant professor at Stanford, is already envisioning the future of this technology.

“This is like the PC revolution for space,” said Manchester, who joined the aeronautics and astronautics faculty last year. “We’ve shown that it’s possible for swarms of cheap, tiny satellites to one day carry out tasks now done by larger, costlier satellites, making it affordable for just about anyone to put instruments or experiments into orbit.”

Manchester’s team deployed 105 ChipSats into low-Earth orbit on March 18 and, the next day, detected the signals they sent one another, demonstrating their ability to communicate as a group, a prerequisite to operating as a swarm. Since that time, the researchers have been working with NASA to complete the first phase of the mission data analysis.

Each ChipSat is a circuit board slightly larger than a postage stamp. Built for under $100 apiece, each ChipSat uses solar cells to power its essential systems: the radio, microcontroller and sensors that enable each device to locate and communicate with its peers. In the future, ChipSats could contain electronics tailored to specific missions, Manchester said. For instance, they could be used to study weather patterns, animal migrations or other terrestrial phenomena. Spacefaring applications might include mapping the surface features or internal composition of asteroids or moons orbiting other planets.

“The biggest cost of space exploration is the launch, and we’re trying to create the smallest, lightest satellite platform capable of carrying out useful tasks,” Manchester said.

The ChipSats were prototypes designed for the sole purpose of orbiting Earth for a few days before they burned up upon re-entering the atmosphere. But the data gleaned from this experiment—the largest simultaneous deployment of the smallest working satellites ever built—helped to validate Manchester’s goal of taking the next step in the miniaturization of satellite technology. 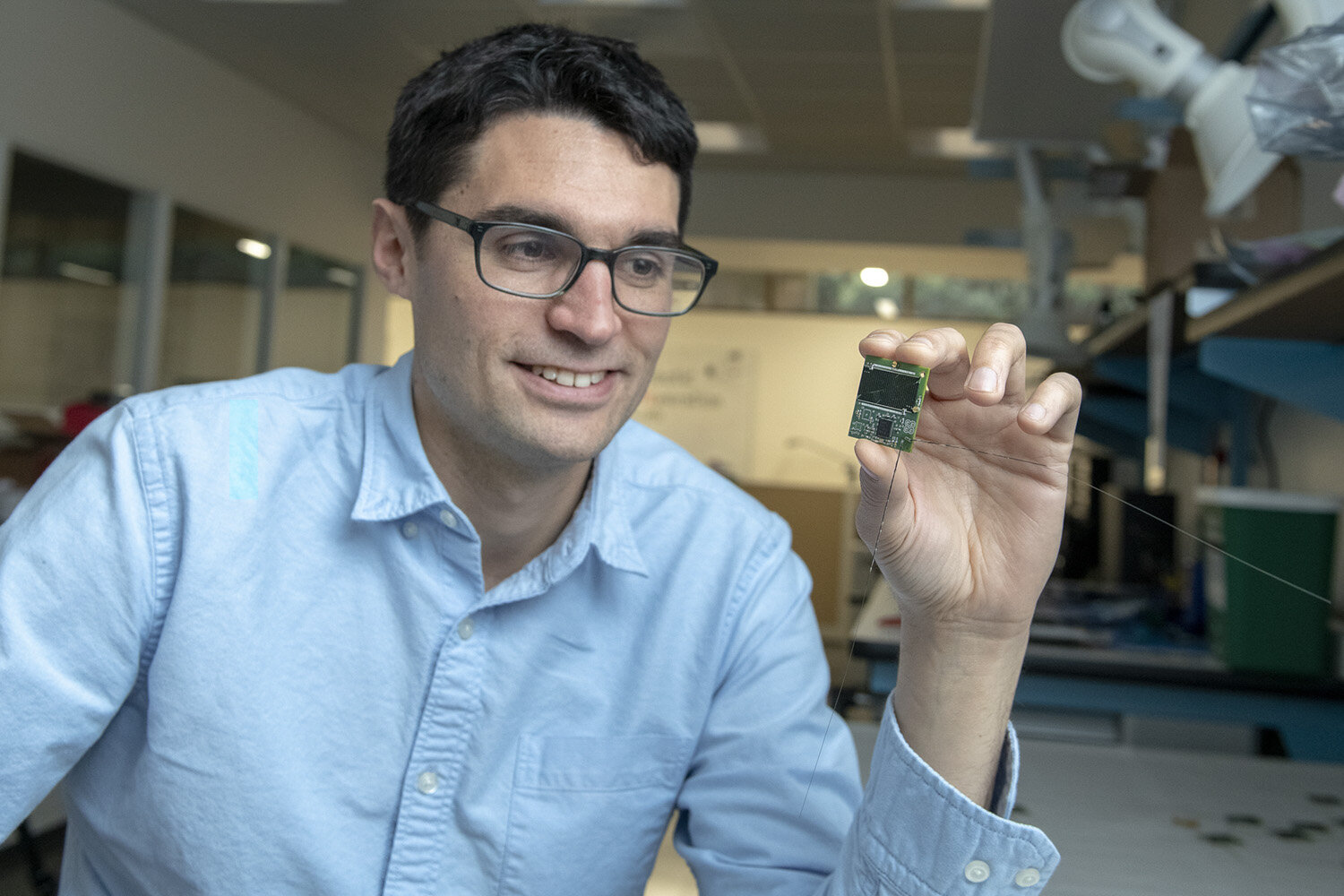 Zac Manchester holds a ChipSat, a device costing under $100 that is designed to work together with a swarm of similar gadgets to perform tasks that currently require large, costly satellites. Credit: L.A. Cicero

Ever since Sputnik launched in 1957, nations—and later companies—have raced to put satellites into orbit for both military and civilian purposes. However, at $10,000 to put a pound of payload into space, launch costs have always presented a huge barrier to entry. But in 1999 a breakthrough occurred when researchers at Stanford and the California Polytechnic State University defined and popularized the CubeSat: a light, 4-cubic inch container that could carry a small-scale scientific mission. CubeSats aligned perfectly with NASA’s goal of developing smaller, less expensive missions to give more researchers a chance to beat the cost barrier and send experiments into space.

In 2009, while studying with Cornell professor Mason Peck, Manchester envisioned how to engineer the electronic essence of a satellite into a device even cheaper and easier to build than a CubeSat. In 2011, he crowdfunded his project by putting it on Kickstarter.com, quickly raising about $75,000 from 315 contributors, and what he initially called the KickSat project was born. “I want to make it easy and affordable enough for anyone to explore space” is how Manchester put it at the time.

Ever since he has pursued this vision through research stints at Harvard and NASA Ames before coming to Stanford. He has had disappointments. In 2014, Manchester’s first KickSat project was launched into space carrying 100 ChipSats, but a glitch caused the experimental satellites to reenter the atmosphere and burn up before they could be deployed.

Undaunted, Manchester and collaborators at Cornell, Carnegie Mellon and NASA Ames redesigned the ChipSats for the recent mission. They packed 105 ChipSats into a CubeSat mothership called KickSat-2, which was launched to the International Space Station on November 17. For months Manchester waited for NASA’s green light to deploy the ChipSats inside Kick-Sat-2 into low-Earth orbit.

That moment finally came, when the deployment commands were transmitted from the 60-foot dish behind the Stanford campus. Another anxious day passed before Manchester learned that the sensitive dish antenna had detected the faint signals from the ChipSats, which meant they were operational. Manchester worked with collaborators around the world to track the ChipSats as they transmitted data until reentering the atmosphere and burning up on March 21.

Buoyed by this success, Manchester said he will continue work toward a near future in which students, hobbyists and citizen scientists around the world can build and launch their own tiny satellite missions as easily as they might now fly a drone.