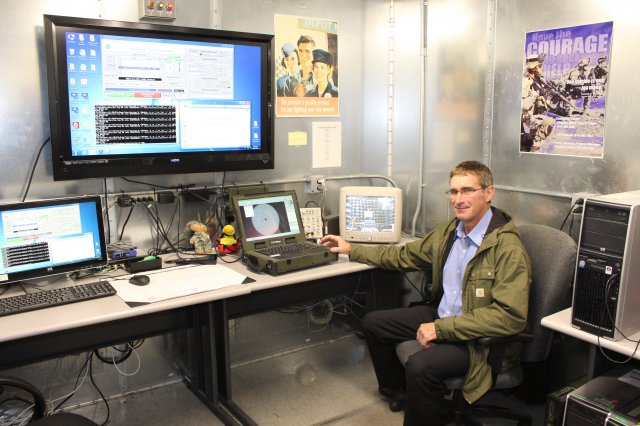 Army production and logistics is teaming with Army research and development to better streamline the rapid design and fielding of cutting-edge technologies to the Soldier.

“The Army has called for increased innovation, which is shining a spotlight on prototype designs,” said Christopher Manning, Prototype Integration & Testing Division chief, under the Army’s Communications-Electronics Research, Development and Engineering Center, or CERDEC. “However, it is imperative that our designs can be leveraged for mass production and sustainment.”

CERDEC’s Command, Control, Communications, Computers, Intelligence, Surveillance and Reconnaissance, or C4ISR, Prototype Integration Facility, or C4ISR PIF, designs, tests and builds prototypes using an iterative development process. It is teaming with Tobyhanna Army Depot, or TYAD, which is staffed and equipped as the full-rate production and logistics support facility for C4ISR technologies.

Both organizations are under the U.S. Army Materiel Command’s, or AMC’s, subordinate commands – CERDEC is part of the Research, Development and Engineering Command and TYAD is part of the Communications-Electronics Command. AMC provides materiel readiness across the spectrum of joint operations. Its research, development and engineering centers and depots are critical components of the Army’s organic industrial base.

“We think that if we capitalize on the expertise and flexibility of both organizations, we better support the warfighter,” said Robert Katulka, director of Production Engineering at TYAD. “Our engineers and technicians insert rapid manufacturing expertise, on multiple platforms, into the process to deliver these concepts to the field quicker.”

Product Manager, or PdM Radars, contacted the C4ISR PIF team to redesign the LCMR’s cab kit, which houses various C4ISR equipment, so that it could be easily integrated into a High-mobility Multipurpose Wheeled Vehicle, or HMMWV, for on-the-move capability.

“The original kit did not account for all of the LCMR-specific mission equipment and was a safety concern for Soldiers while on the move,” said Mark Miltenberger, C4ISR PIF project lead. “Our redesign-enabled Soldiers to easily mount their SINCGARS [Single Channel Ground and Airborne Radio System] radios, mission command situational awareness capabilities, a laptop, and peripherals onto a HMMWV.”

PdM Radars also required a power distribution box that allowed the radar to be powered directly from the HMMWV while on-the-move or from a generator when parked. C4ISR PIF engineers completed both designs in seven months, then integrated the first set of HMMWVs from top to bottom. Members of the TYAD team joined the PIF engineers at Aberdeen Proving Ground, Maryland, to cross train on the power box assembly, wiring and testing.

“We completed the redesign to meet customer requirements and then produced a sufficient number of boxes to support the initial fieldings,” Manning said. “That production rate shifted once we transitioned the work to TYAD, but throughout the process, both teams have been working in concert.”

PdM Radars realized additional efficiencies by shifting all full-production integration services to the regional support center in Fort Bragg, North Carolina, and CERDEC C4ISR PIF engineers assisted with this transition by providing training to the engineers at Fort Bragg.

“Building capabilities organically within the Army gives us the flexibility to shift production functions to ensure the best value for the Army,” Miltenberger said. “We all have one common goal, and that is to field new technologies to the Soldiers as quickly and cost effectively as possible.”

The partnership between the two organizations requires more than teamwork; each organization’s equipment must have compatible components that allow for a smooth transition from prototype to full-rate production.

“Our CAD engineering systems are complementary; we run the same software and use the same engineering techniques so that’s powerful,” Katulka said. “It certainly makes it easy for us to exchange technical information back and forth.”

Innovative ideas are not relegated to the C4ISR PIF; engineers at TYAD recently proposed an alternative design for the LCMR power boxes that they believe will expedite the full-rate production process. The original design was a three-piece welded assembly, but now TYAD and C4ISR PIF engineers are collaborating to develop a single piece assembly out of sheet metal, which they believe will be stronger and allow for a quicker full-rate production assembly.

“As we move forward, we believe this partnership will solidify when you have the design entity come up with the ideas and have the production experts in the room so that you are designing for the manufacturability,” said Keith Hoffman, Systems Integration & Support Operations division chief for TYAD.

Each organization provides a unique, necessary core competency to provide the best value for the Army, and in turn, to the taxpayers, Manning said. Leaders within both organizations are currently discussing the most efficient method to field future capabilities and are taking lessons learned from past partnership efforts.

“Our collaboration ultimately delivers innovative solutions to ensure Soldiers retain a competitive military advantage throughout the world,” he said.