The touchscreen display market should reach $14 billion in 2012, according to a report from IDTechEx, with an ongoing compound annual growth rate (CAGR) of 36% through 2014. While the largest growth will continue to be in consumer products including tablets and smart phones, there is also growth in LCDs over 10 in. in size, especially in eBooks, game consoles, car displays and navigation devices, digital cameras, laptops, PC monitors, and medical devices.

A capacitive touch screen panel consists of an insulator glass coated with a transparent conductor such as indium tin oxide (ITO). When a human (also a conductor) touches the screen it results in a distortion of the body’s electrostatic field, measured as a change in capacitance. Projected capacitive touch technology permits more accurate and flexible operation by etching the conductive layer of the screen.

While today’s touchscreens are almost always equipped with sturdy and scratch resistant glass, protective films are recommended to further combat scrapes and gouges. Protective films have been around for about 30 years, but in a less than optimum form. Most films are still applied wet. They require wetting the film, squeegeeing the film to remove bubbles, and then letting it dry. These films can often trap air, dirt, or dust bubbles during application.

Dry-application films are becoming more popular. These films are available from a number of materials providers. In addition to surface protection, they have anti-reflection properties, backlight reflector capabilities, light control, prism characteristics, reflective polarization, and more. 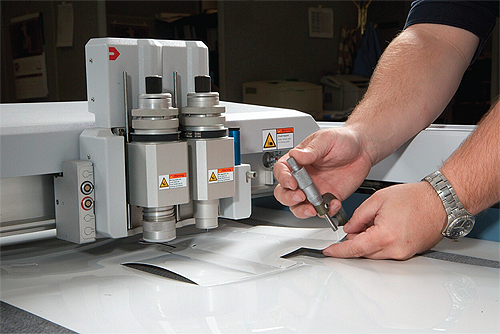 The layers in a protective cover film are laminated together to create the finished cover. The polyester film used is often polyethylene terephthalate (PET), which is clear, strong, and impact resistant. It is lightweight and can be processed as a very thin film.

In a typical dry-wipe application process, the customer removes the bottom liner, lays the film down on the face of the device, and dry wipes the film while applying pressure. The dry wipe process is easy, resulting in no “wetting,” no trapped air bubbles or dust, and no peeling.

While the touchscreen manufacturer can specify the characteristics they require in a cover film, an experienced converter can ensure that they meet the specifications by selecting the appropriate adhesive and release liner, cutting the film to the exact dimensions of the device, whether it’s handheld size or large screen, and producing a finished component designed for manufacturability.

The process begins with testing to ensure that materials and adhesive meet specifications and are compatible. Use of a test lab is advisable. The lab should test for temperature resistance, performance at upper temperature limits, tensile and peel strength, outgassing, dielectric strength and electrical conductivity, resistivity, thermal conductivity, slitting widths and tolerances. 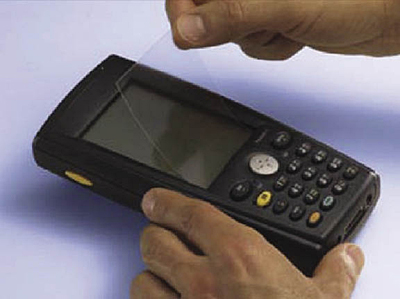 Capacitive touch screens are most often deployed in consumer devices like smart phones and tablets. Dry-application films are becoming more popular, as the application process is easy, resulting in no “wetting,” no trapped air bubbles or dust, and no peeling.

It is not uncommon to investigate several films and adhesives and different designs before proceeding to the manufacturing stage. One manufacturer, for example, required a positioning film with printed instructions on it. The final product had the following layers (from top to bottom): printed positioning film, adhesive, clear protective film, adhesive, and a liner. The customer removes the bottom liner, lays it down on the face of the LCD screen, and dry wipes the film while pressing it down. Once the protective film adheres, the customer removes the printed film from the top.

In another example, a top film acts as an easy-to-clean layer, laminated to the protective film. In addition, the converter applies a non-tacky adhesive and a removable liner. The top, easy-to-clean layer guards against fingerprints and smudges, as well as scratches.

Once the materials and design are determined, production can be done on a rotary die-cut press with tolerances of
+/- 0.032 in. Kiss-cutting can be used to create a “crack and peel” on the liner and film. In addition to die-cutting, a converter can also provide water jet cutting, slitting, rewinding, and laminating. Printing and kitting for the complete “shelf-ready” package should also be available.