A potentially revolutionary instrument now being developed to first find Earth-like planets in other solar systems and then study their atmospheres to identify chemical signatures of life has just passed another technological hurdle that makes it an even stronger contender for a future astrophysics mission. 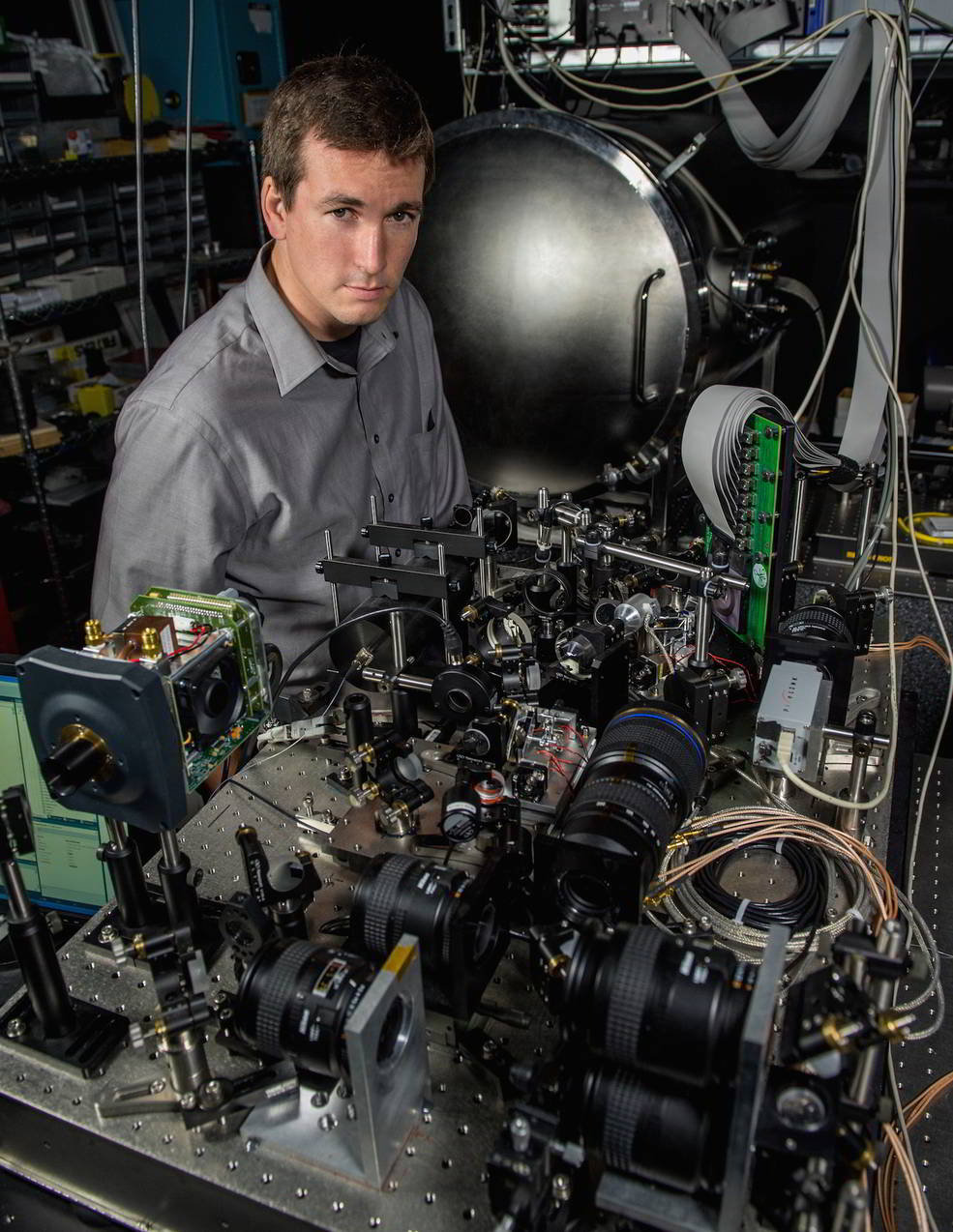 Brian Hicks stands next to the latest incarnation of the Visible Nulling Coronagraph that improves the spectral performance of the potentially groundbreaking instrument for detecting and characterizing exoplanets. The vacuum chamber is seen behind the breadboard design. Credits: NASA/W. Hrybyk

The instrument, called the Visible Nulling Coronagraph (VNC), combines an interferometer with a coronagraph — in itself a first. It’s well on its way to demonstrating operations over a broader spectral range, including the ultraviolet, visible, and near-infrared bands, said Brian Hicks, a fellow with NASA’s Postdoctoral Program who is working with VNC Principal Investigators Rick Lyon and Mark Clampin, who are scientists at NASA’s Goddard Space Flight Center in Greenbelt, Maryland.

“The VNC is demonstrating the spectral range needed for planet characterization,” Hicks said. “It will be more sensitive for finding fainter planets. It also will enable spectroscopy, which is what NASA will need to study the atmospheres of exoplanets to identify signatures of water, oxygen, carbon dioxide, methane, and ozone — the chemistry we associate with habitability for life as we know it.”

Currently, the Kepler Observatory uses indirect means to detect exoplanets, as will the James Webb Space Telescope and the Transiting Exoplanet Survey Satellite in the future.

The next logical step is direct detection using a next-generation space observatory equipped with highly sophisticated instruments, including a coronagraph or occulting star shade that would block starlight and allow the observatory to directly image faint Earth-like exoplanets. 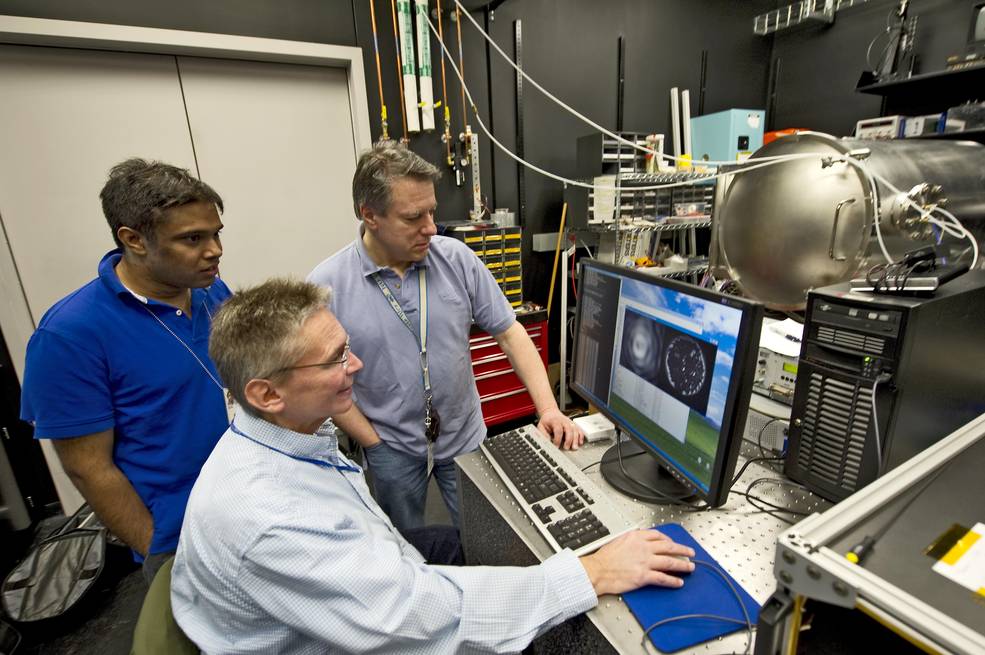 In this image taken in 2012, Rick Lyon (foreground), Udayan Mallik (left), and Sigma Space’s Pete Petrone (right) monitored the progress of wavefront control using the early version of the Visible Nulling Coronagraph that at the time was operating inside a vacuum tank. This version of the instrument proved the VNC concept. Credits: NASA/C. Gunn

The VNC, which Clampin and Lyon started developing nearly six years ago, is ideally suited to this task. Its pupil-based technique for separating star from planet light is naturally compatible with segmented or arbitrarily shaped telescope mirrors, similar to the one that will form the heart of the Webb Observatory. Such a mirror folds up for launch and then unfolds once the observatory reaches its orbital destination.

Instead of using internal masks and or an external occulter to block starlight — techniques employed by more traditional coronagraphs — the VNC relies on a two-armed interferometer that splits and then recombines collected light. Under this concept, starlight gathered by the observatory’s primary, segmented mirror travels down the VNC’s optical path to the first of two beamsplitters, which transmits light into one arm and reflects light into the other interferometer arm.

After traversing both arms, the light encounters a second beamsplitter that recombines the light to create two output paths known as the “bright” and “dark” channels. Starlight passes to the bright channel and planet light to the dark.

However, creating these two channels couldn’t be possible without a technology called the multiple mirror array (MMA). This device, comprised of 163 tiny individual mirror segments that each measure about the width of six average human hairs and are perched atop tiny finger-like devices that allow them to piston, tip and tilt up to thousands of times per second, is placed in the interferometer arm that receives reflected light.

The MMA’s job is to correct errors. It first senses and then corrects wavefront errors caused by vibration, dust, and thermal changes that prevent the bright starlight, collected by the primary mirror, from being perfectly “nulled” — in other words, ultimately canceled in the dark channel.

A spectrograph and imager then would analyze the dark-channel light to determine the planet’s physical properties.

In testing with the VNC testbed, the technique proved that it could achieve nearly billion-to-one contrast, but over a narrow band in the visible spectrum. “This first milestone still stands as the deepest contrast ever achieved with a nulling coronagraph,” Lyon said, adding that this achievement was made possible by engineers Udayan Mallik, who set up all computer interfacing to control the devices, and Pete Petrone, who built the VNC hardware and optics. “It also clearly demonstrated nulling with a segmented aperture — another significant milestone.”

The team now is increasing VNC’s sensitivity over a broader spectral range needed to detect and characterize Earth-like planets.

The group incorporated two pairs of identical prisms into both interferometer arms. These “squashed” rectangular-shaped, highly polished prisms, known as Fresnel rhombs, produce polarizing reflections — similar to what happens to sunlight that reaches your eyes after reflecting off cars or pavement. “While this scattered light reduces contrast when driving without wearing sunglasses, the polarization effect is actually helpful in the VNC,” Hicks said.

“The polarization effect achieved through the rhombs is something that can be used to make starlight suppression with the VNC work at high contrast over a broad spectral range,” Hicks said. “Now we are working to demonstrate the instrument with 40 times the bandwidth,” he added.

But the addition of the rhombs isn’t the only new technology the team is pursuing to cement its possible inclusion in a next-generation mission.

Lyon, Clampin, Hicks, and others on the team received NASA technology-development funds to demonstrate the VNC on an actual segmented optical testbed, called the Segmented Aperture Interferometric Nulling Testbed, or SAINT for short, Lyon said. The work will begin in October.

Goddard engineer Matt Bolcar, Hicks, and Lyon also have received additional NASA funding to investigate the use of freeform optics, an emerging optics technology that allows light-gathering devices to take almost any shape, potentially providing improved image quality over a larger field of view — all in a smaller package.

“One of the primary advantages of freeform optics is that they can reduce the total number of elements needed for a flight VNC. Most importantly, this would improve throughput, among other things,” Lyon said. “By custom tailoring the shape of the optics we may achieve a wider field of view.”

“Each of these is a significant improvement and could make the VNC a game changer when it comes to designing the future mission that will have characterizing exoplanets as one of its top priorities,” Hicks said. “The goal is to use the improvements and the enabling technologies to make the VNC an even better choice for yielding the greatest science return.”