Accurately capturing and recording an underwater ecosystem is a difficult task and one made more difficult when it involves the deep, cold and dark waters of Alaska. This is the challenge presented to the U.S. Army Corps of Engineers – Alaska District and Matt Ferguson, a biologist with the Environmental Resources Section in the Civil Works Branch.

The proposed project is located in the small fishing community of Petersburg in Southeast Alaska and involves dredging for navigational improvements in Frederick Sound, where depths can drop to 500 feet within a half mile off the coast. Efficient operation of the south harbor has been negatively affected by navigation issues for commercial fishing vessels during low tides. This problem involves the rise of land that was previously covered by glaciers, otherwise known as isostatic rebound. After the weight of receding glaciers is removed, the now uncovered ground slowly rises faster than sea levels resulting in shallower depths.

The dredge material from the project must be disposed in a place that is cost beneficial with minimized environmental impacts and sound engineering practices. Historically, a disposal area was used off the northern end of Mitkof Island that fell within inland waters and the Corps’ jurisdiction. The boundaries changed in 2005, however, and the nearest inland waters of Thomas Bay are too distant to be economically feasible. Ocean dumping of the dredge material is the best remaining option.

Ferguson was tasked with not only finding a way to accurately evaluate the environmental impacts of about 90,000 cubic yards of dredge material at deep depths, but also navigating the Alaska District’s first time conducting a site-selection study to identify a dredged material disposal area in ocean waters. Under the permitting authority of the U.S. Environmental Protection Agency’s Section 103 of the Marine Protection Research and Sanctuaries Act, a proposed disposal location must comply with several ocean dumping criteria such as the purpose and need, environmental impacts and adverse effects on other uses including navigation.

“We had never studied areas in depths like this and we’ve never studied somewhere as intensively before because the requirements of the ocean dumping act are explicit,” Ferguson said. “When I got done with my initial coordination with EPA and realized how impactful it would be to collect video, I took a step back and reevaluated what our capabilities were and what we would need to meet the requirements of the site-selection study in a collaborative way.”

He selected three potential disposal areas within Frederick Sound consisting of 24 proposed camera sites to better inform him of the epibenthic fauna (life present at and just above the sea floor) facing potential environmental impacts of dredge material disposal. Previous video-recording capabilities limited Ferguson’s view to depths of about 120 feet, far shallower than the average depth of 500 feet at each site. The deepest locations included in the survey were expected to reach 690 feet. Additional restrictions on possible solutions presented by the deep depths included lack of natural light, cold temperatures depleting battery life, pressure on camera housings and lack of mobility.

“It also needed to be transportable,” Ferguson said “It needed to be able to be broken down and shipped somewhere because we work all over the state here in Alaska and there are many locations that are only accessible by plane or by boat.”

With those requirements in mind, Ferguson set out on his own to fabricate a camera system capable of the job. After contacting a small company that worked with him to provide an adequate camera and light setup, he constructed a rig from galvanized and stainless steel that was compact when broken down and easily transportable. Capable of being deployed on different support vessels, the camera system is dropped over the side of a boat with the same winch used for crab pots. While in the water, the camera can connect with a computer tablet to collect field location data, take georeferenced photos of additional shrimp and crab pot samples, and use existing imported map geometry from geographic mapping systems.

During the camera system’s initial Frederick Sound deployment in August 2018, Ferguson made in-field adjustments, such as moving hardball buoys and anchor weights, to accurately capture the ecosystem on film. The long hours and alterations paid off after review of the footage showed clear images of the seabed 500 feet below him. So far, video from the depths has captured crab, shrimp, fish, sea urchins, brittle stars and a variety of smaller crustaceans called amphipods. The camera system has been successfully deployed on three trips to Petersburg, allowing a better assessment of the possible environmental impacts at a disposal site.

More than collecting clear footage of a previously inaccessible environment, the camera system helped both the Corps and the project save money by keeping the work in-house. Early estimates placed the cost of performing a site selection, including benthic surveys, at around $1 million, but Ferguson estimates he has conducted the work for about one-tenth the cost of hiring a contractor.

Other filming options, such as use of an underwater ROV (Remotely Operated Vehicle) or benthic sled, presented problems or high costs that were not feasible for the project. Chris Hoffman, a fellow biologist with the Environmental Resources Section, has previous first-hand experience with ROVs and encountered one of the potential drawbacks for their use on this project while helping Ferguson on the initial deployment of the camera system.

“The first time we dropped that camera last August, we ran into a sunken vessel and lost that 25 pound cannonball,” Hoffman said. “The last thing you’d want is that $100,000 ROV to become an anchor.”

The project and site selection are still ongoing, but the camera system has already shown promise outside of Petersburg. In February, Ferguson presented his design to a committee at the Corps’ Technical Innovation Forum, which is considering the possible adoption of his system throughout the organization. Ferguson and Hoffman hope to use the camera system on upcoming Alaska civil works projects, such as navigation improvement studies in Kotzebue, Whittier, Elfin Cove and especially the remote island of St. George. 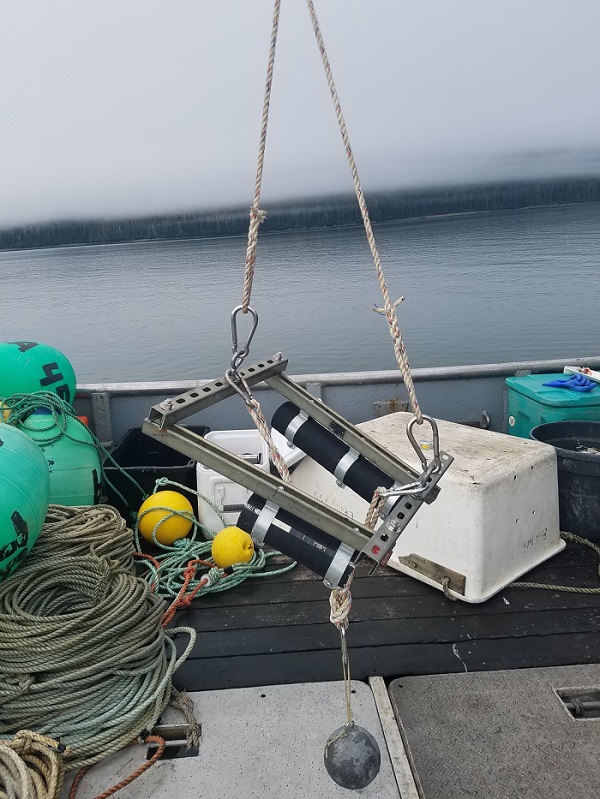