Over one thousand miles of sewage lines run under the city of San Francisco, which can collect up to 500 million gallons of wastewater in a single day when it rains. The sewage lines transport the wastewater to one of three treatment plants, where pollutants and other contaminants are removed before being discharged into San Francisco Bay. Wastewater is purified through physical, chemical, and biological processes that create safe enough water to reincorporate back into the environment, while isolating sewage waste.

Considering how San Francisco is surrounded by the Pacific Ocean on three sides, this process can become cumbersome, especially in stormy conditions when overloads in the city’s sewage system by storm and groundwater aren’t uncommon. An operation with this level of intricacy requires top-notch maintenance.

Sensors constantly monitoring the conditions of these pipes and factors like the speed and amount of water running through, along with the water’s contaminant levels need to operate for long periods of time uninterrupted.

This was a prevalent issue in San Francisco and other large cities for a long time, however a procedure conducted by the San Francisco Public Utilities Commission (SFPUC) has alleviated some of these inconveniences. The SFPUC conducted a smart sewer pilot with the remote monitoring company Ayyeka to determine the effectiveness IoT sensors and other devices could have in the urban sewage maintenance of San Francisco. 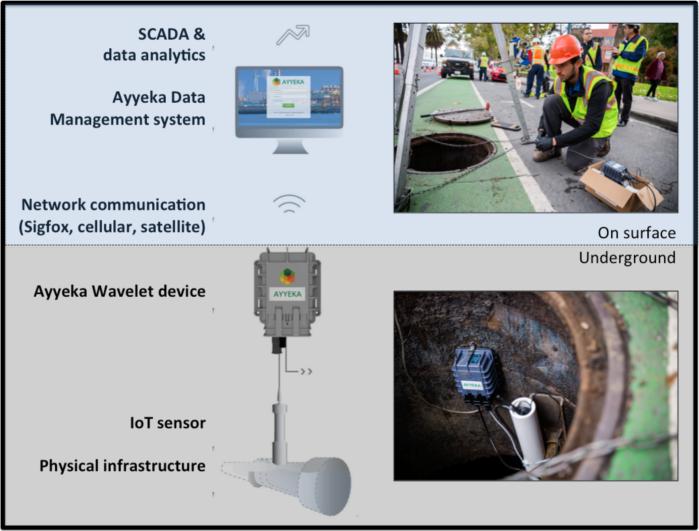 The kit’s sensors detect the levels of three factors when making their measurements:

Using contactless radar and ultrasonic technology, the discharge kit can continuously monitor wastewater, while using hardwired sensors and wavelet devices to communicate over the Sigfox wireless (LPWAN) network to a hub. Sigfox uses a wide-reaching Ultra-Narrow Band (UNB) that frequently passes through solid objects. This is ideal for utilities since those solid objects usually entail layers of dirt and concrete, among other types of barriers.

The Ayyeka Wavelet uses two communicative channels; the first being Sigfox (for real-time communication), which is ideal for subterranean environments with low-power requirements. The second is cellular communication, which provides redundancy and allows data backup, along with remote configurations and upgrades.

Using a cellular or satellite connection, the hub communicates to the Ayyeka cloud, where data is integrated with SCADA systems or through an API with third-party software systems. Low-power Ayyeka devices in the pilot measure spikes in wastewater conductivity, along with tide conditions, while the SFPUC can set alerts to monitor wastewater quality and receive real-time notifications. This not only reduces the cost of labor, but also helps with regulatory compliance.