The nail-biting maneuver that sent Japan’s Akatsuki spacecraft into orbit around Venus this week is being celebrated by NASA scientists, eager to learn more about the atmosphere and climate of Earth’s enigmatic sister planet.

At about 7 p.m. EST on Sunday, Dec. 6, the Institute of Space and Astronautical Science (ISAS) of the Japan Aerospace Exploration Agency (JAXA) commanded the climate orbiter to fire four thrusters, aimed at nudging the spacecraft into orbit around Venus. About a half hour later, JAXA/ISAS announced that the small probe had successfully achieved an elliptical orbit around Venus.

A statement issued Wednesday from JAXA confirms the successful insertion, the “good health” of the spacecraft, and its present orbit. “As a result of measuring and calculating the Akatsuki’s orbit after its thrust ejection, the orbiter is now flying on the elliptical orbit at the apoapsis altitude of about 400 kilometers and periapsis altitude of about 440,000 kilometers from Venus. The orbit period is 13 days and 14 hours. We also found that the orbiter is flying in the same direction as that of Venus’s rotation.” 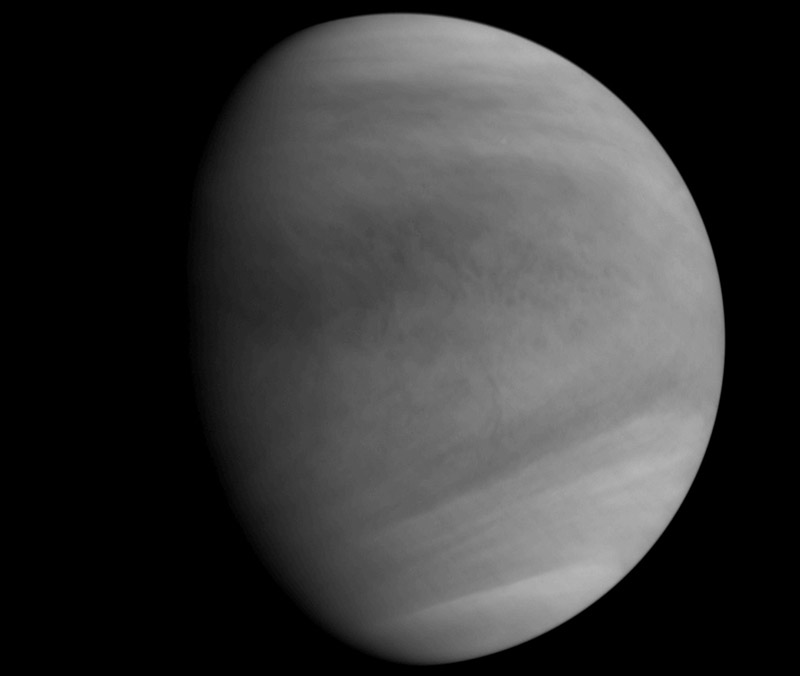 While space exploration doesn’t usually allow for second chances, Akatsuki got another shot at Venus after zipping past the planet on its first attempt in December of 2010, the result of a main engine failure during a crucial orbital-insertion burn. Akatsuki, which means ‘dawn’ or ‘daybreak’ in Japanese, spent five years orbiting the sun so it could catch up with Venus and try again.

“It’s the dawn of a new day for science at Venus,” said Jim Green, director of planetary science at NASA Headquarters in Washington. “JAXA found a way to overcome adversity and make it look easy. Their team really pulled off a miracle by getting the mission back on track.”

JAXA has received images from three instruments whose function has already been confirmed—the Ultraviolet Imager (UVI), the Longwave IR camera (LIR), and the 1-micron camera (IR1). The agency plans to check the function of three additional science instruments while gradually adjusting the orbit to a period of about nine days. Regular science operations are scheduled to start in April of 2016.

While the mission is not funded by NASA, an agency partnership with JAXA provides an opportunity for eight NASA scientists – including two U.S. scientists in residence at ISAS, Japan – to work with the Akatsuki team and study data from the spacecraft over the next year or so.

NASA also contributes to the partnership with navigation assistance and use of its Deep Space Network, a worldwide network of antennas that supports interplanetary spacecraft missions.

Green is especially interested to learn more about suggestions of lightning in the atmosphere of Venus. “The building blocks of life are the result of reactions in which lightning may play a role. If there’s lightning in the Venus atmosphere it’s a step toward understanding what that atmosphere was like in the past and whether it may have supported life.”

Akatsuki is the first spacecraft to explore Venus since the European Space Agency’s Venus Express reached the end of its mission in 2014.