Japan’s Hayabusa2 probe successfully landed on the Ryugu asteroid that’s 300 million km away, to collect samples that could point to the origin of the solar system and life itself.

The probe didn’t stay long. After touchdown, it fired a special bullet into the asteroid’s surface in order to gather the scattered dust samples for analysis back on Earth. Hayabusa2 then returned to its holding position in space, according to Japan Aerospace Exploration Agency (JAXA) officials via AFP.

The probe took photos throughout its descent. Below is one of the last images taken by Hayabusa2 before the bullet was fired. 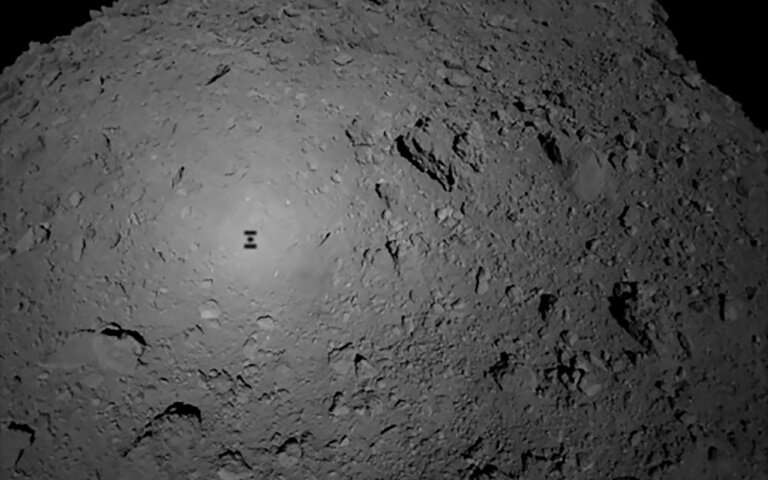 The landing was faster than expected, and it seems the process unfolded smoothly. A live webcast captured the anxious JAXA staff members in the control room during the event. When the team received a signal from the Hayabusa2 that it had landed, the room exploded into applause, according to AFP.

The whole process was documented on Twitter, with the mission posting a celebratory photo in the aftermath of Hayabusa2’s success.

Originally, the landing was supposed to take place last year, however, surface surveys revealed the asteroid was more rugged than expected. So, the team had to regroup to find an ideal spot for touchdown.

Additional tests, such as the one below, were carried out, firing an identical tantalum bullet used by the probe in a container of artificial gravel mimicking Ryugu’s surface conditions. After Hayabusa2’s successful touchdown, it’s evident the JAXA tests exceeded expectations.

Ryugu is a carbon-rich (C-type) asteriod, and according to the BBC, “The near-Earth asteroid (NEA) is a relic left over from the early days of our Solar System.” So, Ryugu may reveal how water and life formed on Earth.

The mission also dispatched two tiny hopping MINERVA-II rovers, as well as the MASCOT lander, to collect data about the asteroid’s surface. The two rovers can jump as high as 49 ft (15 m), and stay in the air as long as 15 minutes. They use on-board cameras, thermometers, sensors, accelerometers, and gyroscopes, according to JAXA.

Carrying a $270 million (30 billion yen) price tag, the Hayabusa2 mission launched in December 2014 and is slated to leave Ryugu in December 2019, returning to Earth a year later.