A federal judge on Friday struck down a Trump administration decision allowing states to force low-income adults to work to qualify for Medicaid.

The 60-page ruling, which is likely to be appealed, was hailed by advocates for the poor. But it could limit the number of states expanding Medicaid under the Affordable Care Act.

“The Secretary never adequately considered whether [the work requirement] would in fact help the state furnish medical assistance to its citizens, a central objective of Medicaid,” wrote Judge James Boasberg. “This signal omission renders his determination arbitrary and capricious.”

Boasberg also noted that “the Secretary never provided a bottom-line estimate of how many people would lose Medicaid with Kentucky HEALTH in place. This oversight is glaring, especially given that the risk of lost coverage was ‘factually substantiated in the record.’”

The case has been closely watched because work has never been a condition for receiving health coverage through Medicaid.

“Today’s decision is disappointing,” said Seema Verma, administrator of the Centers for Medicare & Medicaid Services. “States are the laboratories of democracy and numerous administrations have looked to them to develop and test reforms that have advanced the objectives of the Medicaid program. The Trump administration is no different.”

The administration is now reviewing its legal options, she said.

The ruling by the U.S. District Court immediately blocks Kentucky from moving ahead with implementing its work requirement, which was scheduled to begin its rollout Sunday.

“Even a temporary implementation of Kentucky HEALTH could cause serious harm,” Boasberg wrote in his decision.

But Adam Meier, secretary of Kentucky’s Cabinet for Health and Family Services, dismissed the court’s ruling, saying it was very narrow. He also offered words of caution.

“While we disagree with the Court’s ruling … we look forward to working with CMS to quickly resolve the single issue raised by the Court so that we can move forward with Kentucky HEALTH,” he said in an email. “Without prompt implementation of Kentucky HEALTH, we will have no choice but to make significant benefit reductions.”

Critics of the work requirement, however, applauded the court’s finding, saying that it reinforced and emphasized Medicaid’s mission.

“Medicaid is about health insurance. Period,” said Frederick Isasi, executive director of Families USA, a consumer advocacy group that supported the health law. “And policies that make it harder for people to get health insurance run counter to the program’s purpose.”

Judy Solomon, vice president of the left-leaning Center on Budget and Policy Priorities, agreed, calling the decision “a big victory.” She said this work requirement rejection should apply to the other states looking to implement it.

Those on the other side of the issue took a different view.

“It’s a setback, but I would not call it a blow,” said Angela Rachidi, a research fellow with the conservative American Enterprise Institute. She said she believes that the ruling will affect only Kentucky and that other states will move forward with the same provision, which could illicit other lawsuits.

“Today’s decision is clearly erroneous and should be reversed swiftly,” said Jonathan Ingram, vice president of research at the Foundation for Government Accountability, which favored the work requirements and opposes the health law.

Kentucky Gov. Matt Bevin, a Republican, had threatened to scale back the health program if the courts rejected the mandate, a move that could leave hundreds of thousands of low-income adults without coverage. 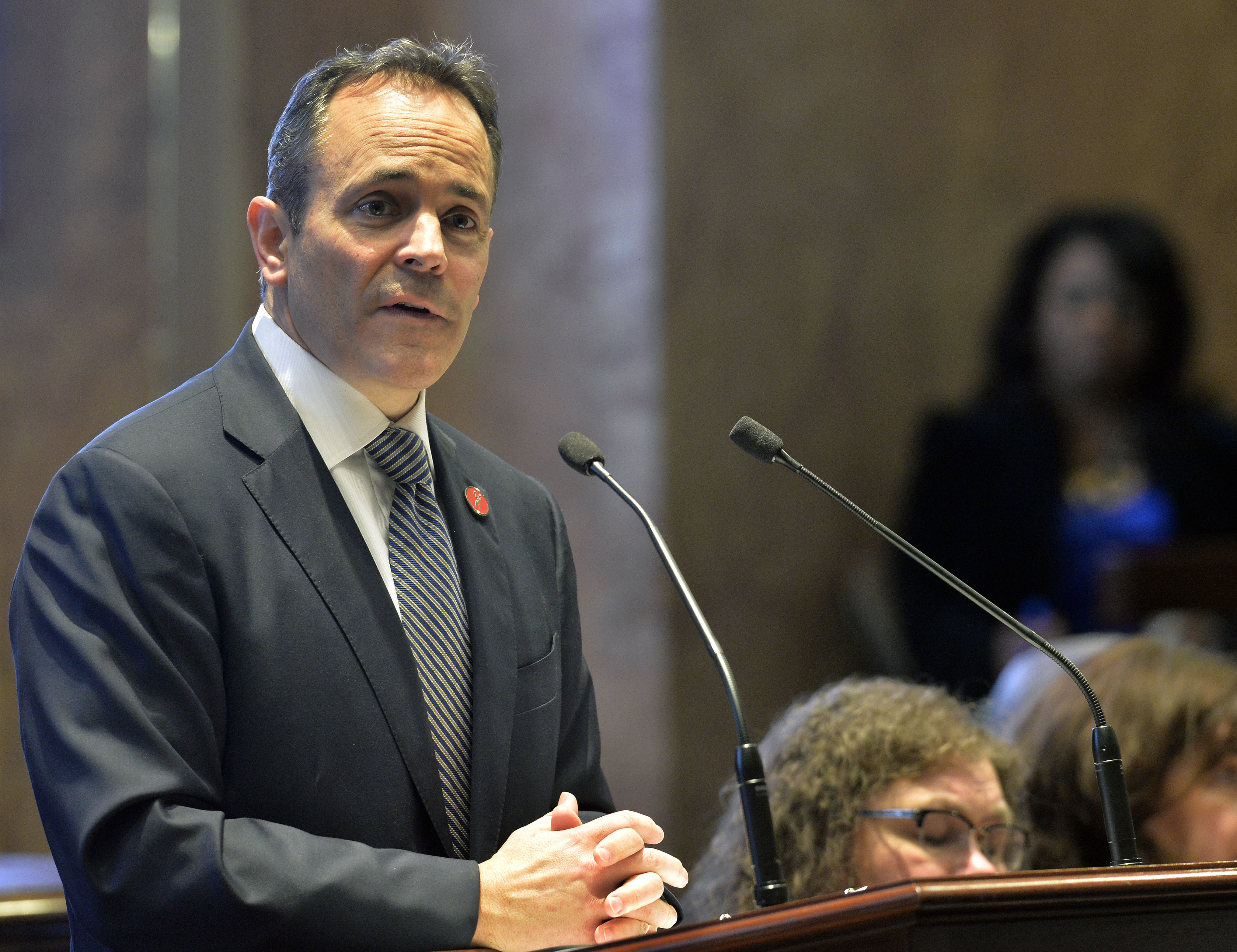 In this Tuesday, Jan. 16, 2018 file photo, Kentucky Gov. Matt Bevin speaks to a joint session of the General Assembly at the Capitol in Frankfort, Ky. A federal judge says Kentucky can’t require poor people to get a job to keep their Medicaid benefits, chastising President Donald Trump’s administration for rubber-stamping the new rules without considering how many people would lose their health coverage. (AP Photo/Timothy D. Easley, File)

Kentucky was the first of four states that won federal approval this year to advance a work requirement, a historic change in the federal-state program’s 53-year history. The others are Arkansas, Indiana and New Hampshire. It’s unclear if this federal court ruling invalidates the other states’ work requirement plans.

“This is a big roadblock for the four states looking to implement these already approved waivers,” said Matt Salo, executive director of the National Association of Medicaid Directors. “The court decision acknowledged that there will be appeals, and I suspect this may well end up at the Supreme Court eventually.”

Kentucky’s program would have required nondisabled adults each month to participate in 80 hours of work, job training, education or other volunteer service to remain covered. Those failing to meet the requirement can regain coverage the month after they complete 80 hours of community engagement in a 30-day period or by taking a state-approved health literacy or financial literacy course.

Those exempted include pregnant women, full-time students, primary caregivers of a dependent and beneficiaries who are considered medically frail or have an acute medical condition that would prevent them from complying.

State officials estimate about 200,000 adults would have to comply with the new work requirements by year’s end.

Critics say the work requirement would lead many low-income people to lose their health coverage, and with it their access to care. They note Kentucky’s own projections show that 95,000 Medicaid enrollees would fall from the rolls within five years. They fear such a directive could have a chilling effect on people signing up for Medicaid or make it harder for people to qualify.

About 500,000 adults were added to Medicaid in Kentucky after the state in 2014 expanded coverage to everyone with incomes below 138 percent of the federal poverty level, or about $16,700 for a single adult.

Adding a work requirement has been seen in some states as a way to give political cover to Republicans, who after initially resisting the expansion decided to pursue it.

The Republican-controlled Virginia legislature in May approved expanding Medicaid contingent on such a policy. Trump administration officials said the work requirement gives low-income adults an incentive to enter the workforce. Proponents argue that working or doing community service would improve enrollees’ health.

States that are implementing the policy have exempted large swaths of people, such as those who are pregnant, going to school, getting treatment for opioid addiction, taking care of a sick relative or suffering from a medical condition that prevents them from working.

Critics argue that people need Medicaid to get healthy so they can work. The work requirement, they add, was unnecessary because the large majority of Medicaid enrollees already work or go to school or care for a relative.

A Kaiser Family Foundation report estimated just 6 percent of adult Medicaid enrollees would be affected because they either already work or meet one of many exemptions. (Kaiser Health News is an editorially independent program of the foundation.)

But the idea has strong public backing. About 70 percent of Americans said they support states imposing a work requirement on nondisabled adults, according to a Kaiser Family Foundation poll last year.

Advocacy groups filed the lawsuit against the federal government and Bevin on behalf of 16 Kentucky Medicaid recipients. They claim the work requirement violates the 1965 law establishing Medicaid because it would reduce low-income people’s access to health care.

The decision also overturned the entire Kentucky Medicaid waiver approved by the Trump administration in January, saying that “preserving the status quo — including plaintiffs’ continuity of coverage — is appropriate.”

Under Kentucky’s plan, premiums would range from $1 a month for people with little or no income and up to $37.50 a month.

Those above the poverty line who fail to pay would be locked out of coverage for six months and must pay past-due premiums to regain coverage.

Those below the poverty line who don’t pay would have their reward accounts for receiving vision and dental benefits docked.

Heather Hahn, a senior fellow at the nonpartisan Urban Institute, said the ruling was important because it focused attention on the purpose of Medicaid, but she warned this was only the first battle in the legal war over the future of the program.

“There is a lot of momentum for work requirements, and I would expect people to try other avenues to move them forward,” she said.

Gov. Bevin filed a countersuit against those same 16 Medicaid recipients in a federal court in Frankfort, Ky., to uphold the work requirements and other provisions.

The Kentucky Hospital Association and the Kentucky Association of Health Plans filed briefs supporting Bevin in Frankfort while dozens of scholars representing some of the nation’s most prestigious schools of public health are backing the Medicaid recipients in the Washington case.

A decision is pending in the Frankfort lawsuit.