A California judge ruled that a teen girl who was declared brain dead more than three years ago after a tonsillectomy may technically still be alive, allowing a malpractice lawsuit against the hospital to move forward and possibly setting up the family to have her care paid for if they succeed.

Alameda County Judge Stephen Pulido ruled Tuesday that it’s up to a jury to determine whether Jahi McMath is alive, which would increase the damages jurors could award if they determine doctors at Children’s Hospital in Oakland botched a routine operation to remove the girl’s tonsils.

In California, non-economic damages such as pain and suffering are capped at $250,000 for medical malpractice. But juries can award unlimited economic damages far above that cap for ongoing medical care, which Jahi’s family could not claim if she were declared dead.

Jahi’s case has been at the center of national debate over brain death since the girl’s mother refused to remove her daughter from life support after doctors declared the then-13-year-old dead after surgery in December 2013.

Doctors say she had irreversible brain damage from a lack of oxygen and suffered cardiac arrest. A coroner signed a death certificate the following month.

The girl is connected to a ventilator and receives medical care in New Jersey, the only U.S. state that accommodates religions that don’t recognize brain death. 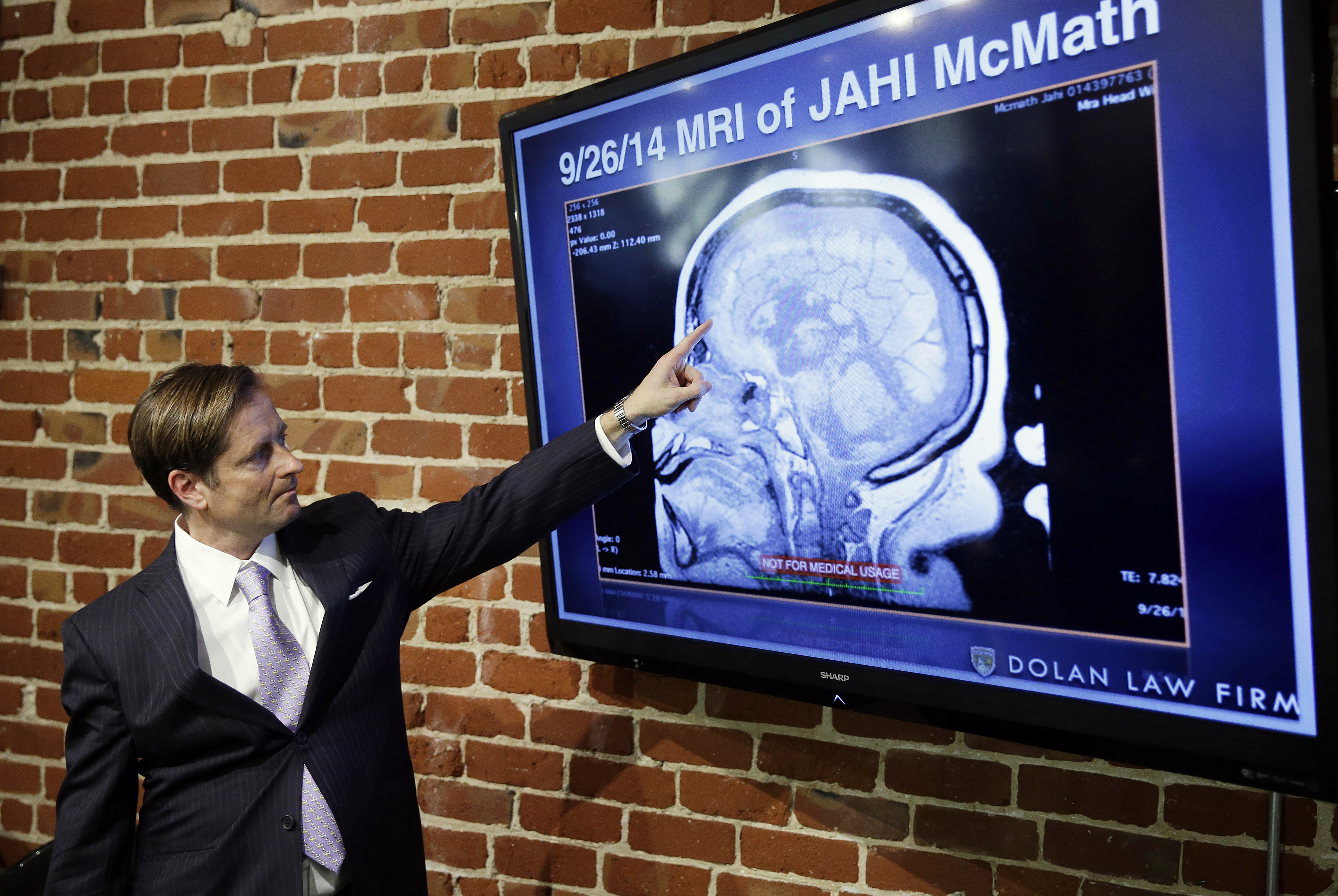 In this Friday, Oct. 3, 2014, file photo, Attorney Christopher Dolan points to a recent MRI of Jahi McMath during a news conference at his law office in San Francisco. A California judge ruled that a teen girl declared brain dead more than three years ago after a tonsillectomy may still be technically alive, allowing a malpractice lawsuit against the hospital to proceed, Tuesday, Sept. 5, 2017. (AP Photo/Eric Risberg, File)

Chris Dolan, who represents the family in a federal lawsuit seeking to rescind Jahi’s death certificate, said the family was “overjoyed” with the judge’s ruling.

“It’s literally a matter of life and death,” said Dolan, who is seeking the unprecedented verdict from a jury so the family can move the girl back to California, where doctors would be compelled to care for her.

Hospital lawyers have argued that the family has not subjected Jahi to tests accepted by the American Medical Association to determine whether someone is brain dead.

Dolan argues that technological advances such as brain scans have made obsolete traditional tests that doctors rely on to diagnose brain death.

Jahi’s case reignited the debate over brain death 15 years after the family of Terry Schiavo fought a bitter, drawn-out legal battle starting in 1998 over whether to remove the Florida woman’s feeding tube.

In Jahi’s case, her mother acknowledges that the girl’s brain is severely and irreparably damaged, Dolan said. But Latasha Spears Winkfield said her daughter is still alive and her Christian beliefs compel her fight to keep her daughter on life support, Dolan said.

Court records show that New Jersey’s Medicaid program has picked up some of the girl’s health costs. The family also has received financial contributions from an online fundraising campaign.

In ordering the case to trial, Alameda County Judge Stephen Pulido relied on the testimony of a well-known critic of the way experts diagnose brain death, Dr. Alan Shewmon.

The retired neurologist said in court documents filed in July that videos recorded by McMath’s family from 2014 to 2016 showed the teen was still alive.

The images, some made public by the girl’s relatives, show Jahi twitching her fingers and reacting to odors that Shewmon and her relatives said were noxious without providing more specifics. Shewmon said Jahi’s body has not deteriorated as expected.

A doctor who examines the girl every three months for the family has testified that Jahi had reached puberty. Shewmon says Jahi is in a “minimally responsive state.”