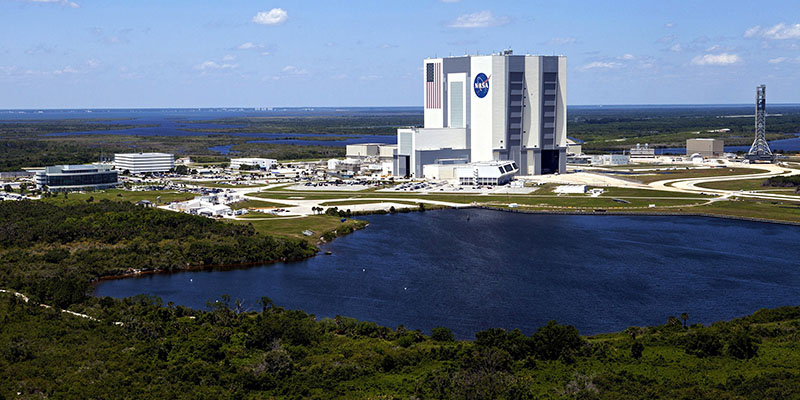 On Thursday, Dec. 3, NASA at the Kennedy Space Center in Florida will team with industry partners to launch science and supplies to the International Space Station.

The event is one more example of how the goal of establishing Kennedy as a 21st century, multi-user spaceport for both government and commercial customers has been achieved.

The capsule, which was processed in the Space Station Processing Facility, will deliver more than 7,000 pounds of equipment and research materials that ultimately can lead to improved life on Earth and drive progress toward future space exploration. 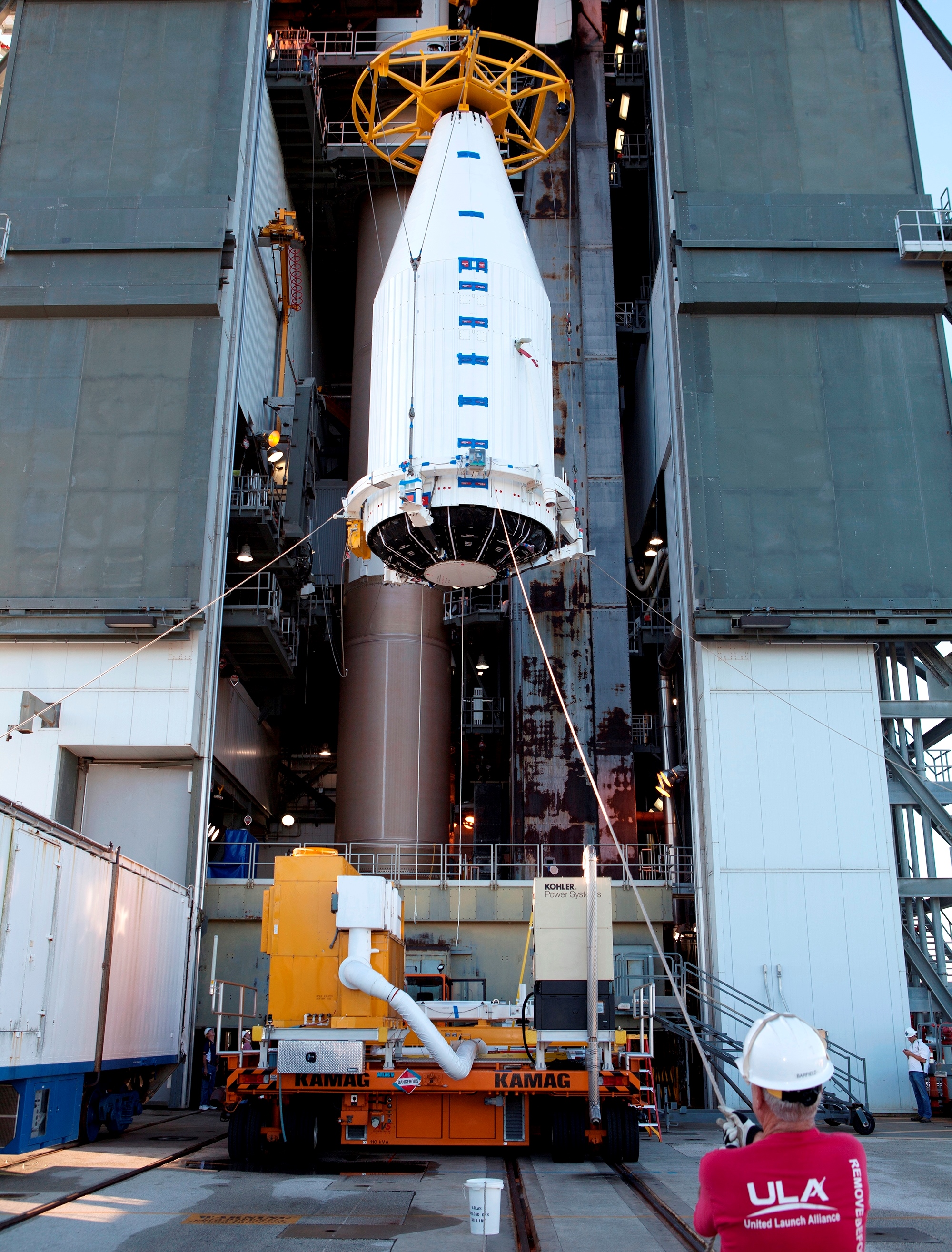 A crane lifts the Cygnus spacecraft, fitted inside a payload fairing, to the Vertical Integration Facility at Space Launch Complex 41 so the spacecraft can be bolted to the top of the waiting United Launch Alliance Atlas V rocket. Built by Orbital ATK, the Cygnus is a cargo-only spacecraft that will take about 7,300 pounds of experiments, equipment and supplies to the International Space Station. Credits: United Launch Alliance

The flawless flight test was a first step in the agency’s plans to send humans on the journey to Mars. It also demonstrated that through Kennedy’s leadership, the center’s workforce accomplished the considerable task of reinventing their approach to operating the world’s leading spaceport.

For more than 30 years, Kennedy was a hub of activity supporting processing, launch and landings during America’s Space Shuttle Program. Thousands of skilled engineers and technicians supported missions that made possible unprecedented achievements in the utilization of space. Shuttle crews deployed and serviced the Hubble Space Telescope, and built the International Space Station involving the world’s best innovators. 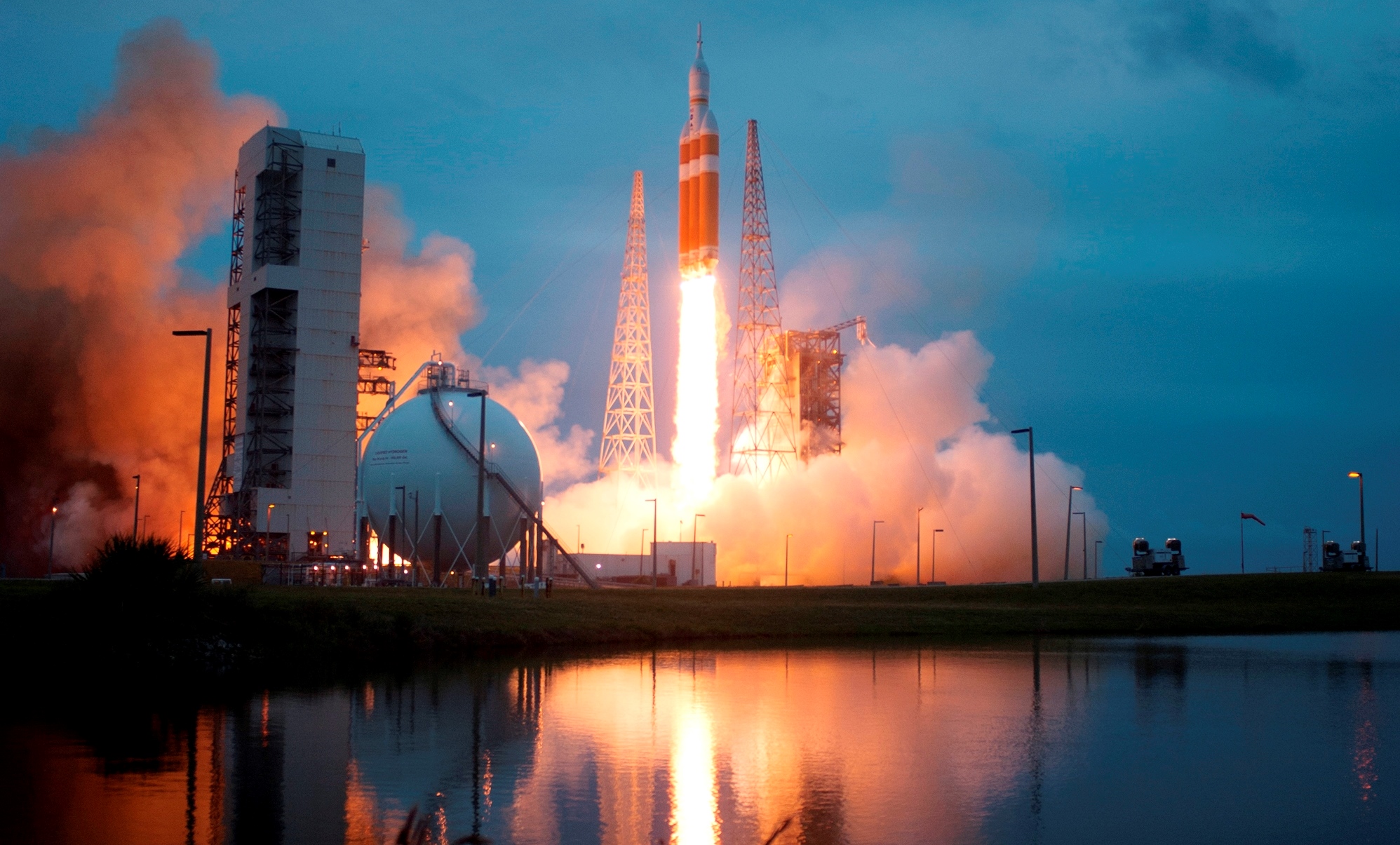 Following the conclusion of shuttle flights and reductions in the size of the workforce, a new approach was required. Additionally, President Barack Obama challenged NASA and the nation to develop a new spacecraft, designed for long journeys to allow the nation to send humans to an asteroid and, ultimately, a landing on Mars.

Kennedy Director Bob Cabana points out that the Florida spaceport now is well on its way to meeting the president’s challenge.

“Here at the Kennedy Space Center, we are continuing to help develop the Orion crew vehicle, and support the Space Launch System rocket with exploration ground systems that will one day send astronauts on trips beyond low-Earth orbit,” he said.

The SLS will be the most powerful rocket ever built and will enable astronauts in the Orion spacecraft to explore distant destinations.

The space center’s NASA-industry team also has met Cabana’s objective for a spaceport ready to meet diverse challenges of the future.

“Our confidence in meeting the president’s objective and our future challenges is based on the fact that we have an outstanding, highly skilled workforce,” he said. “They have already achieved the goal of building a 21st century space launch complex with modernized infrastructure for more cost-effective operations, serving multiple users.”

Making the best use of taxpayer funded resources has been a key objective from reorganization of the space center’s management structure to providing optimum utilization of available assets.

Existing historic buildings and launch sites in use for more than 50 years are being converted to support a modern spaceport equipped with state-of-the art technology meeting the diverse needs of another half-century.

This aerial photo of the Shuttle Landing Facility runway at the Kennedy Space Center looks southwest. Longer and wider than most commercial runways, it is 15,000 feet long, with 1,000-foot paved overruns on each end, and 300 feet wide, with 50-foot asphalt shoulders. The property agreement with Space Florida for the operations and management will allow a variety of commercial and government partners to use the three-mile long runway. Credits: NASA

Ongoing improvements over the past few years include upgrades to facilities such as the Vehicle Assembly Building, mobile launcher, crawler–transporter and Launch Complex 39B – a historic pad that will launch astronauts aboard the Orion spacecraft, atop an SLS rocket.

Other center facilities no longer needed are being turned over to industry partners to take advantage of their unique capabilities.

In June 2012, NASA signed a partnership agreement with Craig Technologies to maintain an inventory of unique processing and manufacturing equipment for future mission support at the Cape Canaveral, Florida, site formerly known as the NASA Shuttle Logistics Depot. In its new role, it is now the Aerospace and Defense Manufacturing Center.

During the past year, NASA signed a 30-year property agreement with Space Florida for the operations and management of the Shuttle Landing Facility. Now a variety of commercial and government partners will have access to use the three-mile long runway. 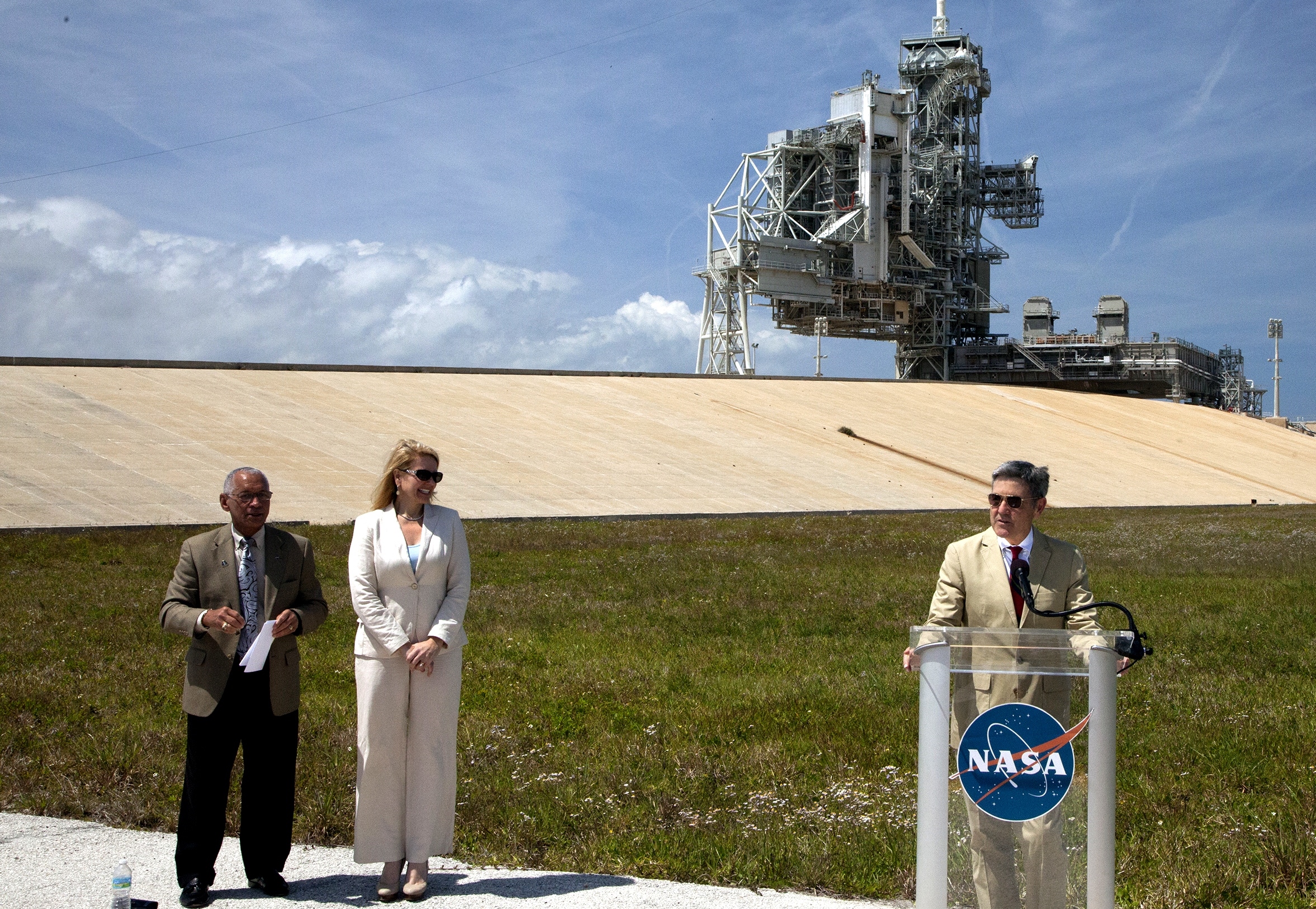 Kennedy Space Center Director Bob Cabana announces that on April 14, 2014 NASA signed a property agreement with SpaceX for use and operation of Launch Complex 39A. NASA Administrator Charlie Bolden, left, and Gwynne Shotwell, president and chief operating officer of SpaceX, look on. SpaceX will use Launch Complex 39A for rockets such as the Falcon Heavy, currently under development. Credits: NASA/Dan Casper

While partners from industry and academia are finding new uses for Kennedy’s unique assets, commercial providers soon will take astronauts to and from the International Space Station.

Through NASA’s Commercial Crew Program, commercial partners SpaceX and The Boeing Company are developing safe, reliable and cost-effective access to and from low-Earth orbit with American-built rockets by the end of 2017. Boeing’s CST-100 Starliner and SpaceX’s Crew Dragon are the next step toward ferrying astronauts to and from the ISS.

To prepare for these next steps in crew transportation, Bay 3 of the space shuttle era’s Orbiter Processing Facility now is being modernized by Boeing as the Commercial Crew and Cargo Processing Facility. There, Boeing plans to prepare its Starliner spacecraft under development.

In 2014, NASA signed a property agreement with SpaceX for the use and operation of Launch Complex 39A where it will launch the Falcon 9 Heavy rocket with its Crew Dragon spacecraft. 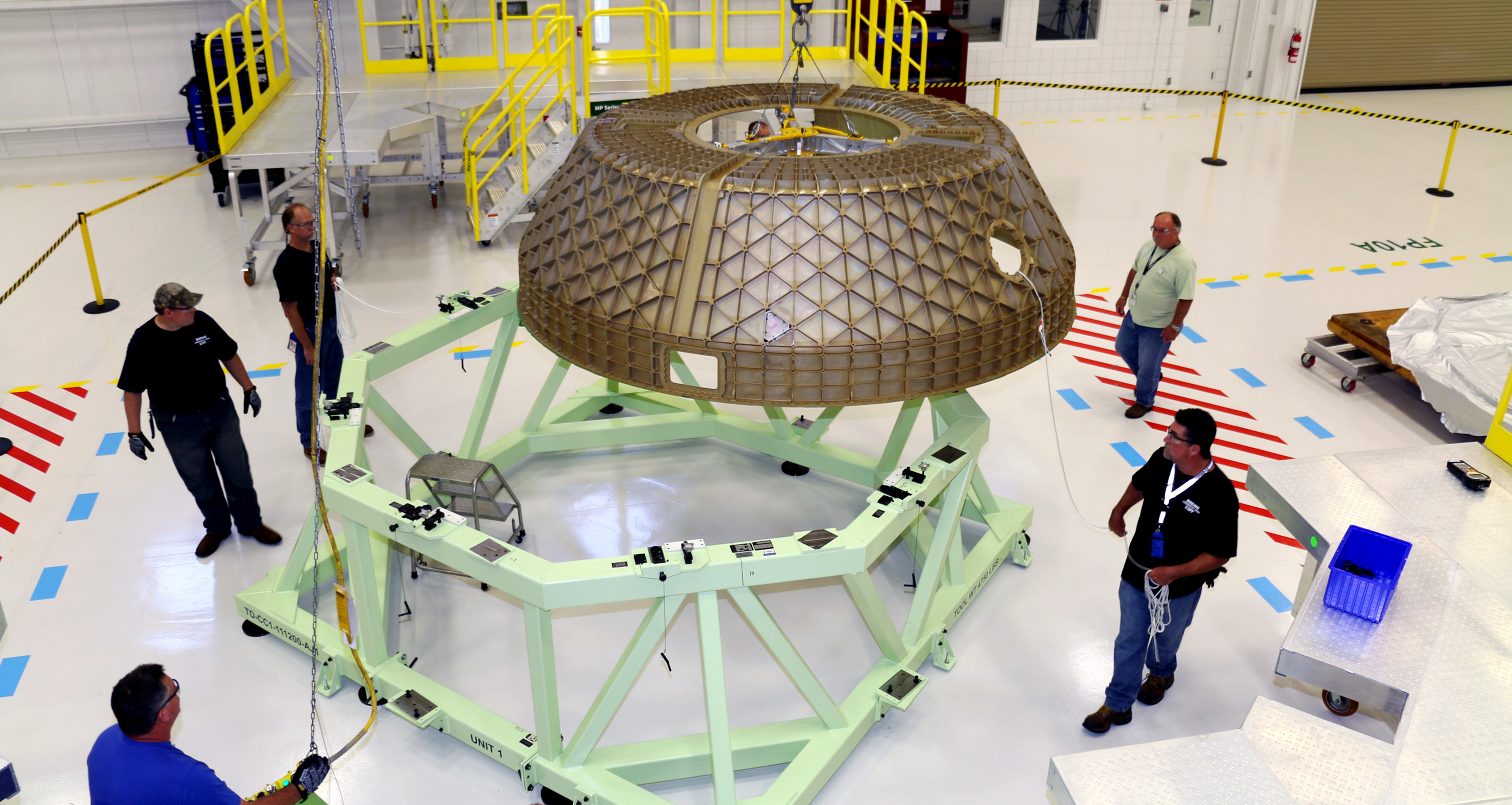 Inside the Commercial Crew and Cargo Processing Facility, engineers move the upper dome assembly of the CST-100 Starliner structural test article onto a work stand. What was Bay 3 of the space shuttle era’s Orbiter Processing Facility now is being modernized by Boeing to prepare its Starliner spacecraft currently under development for the Commercial Crew Program. Credits: Boeing

These are all tangible steps toward meeting the president’s challenge and firmly establishing that Kennedy has become a 21st century, multi-user spaceport regularly launching to low-Earth orbit and beyond.

Missions beyond low-Earth orbit are already underway, including the extensive robotic reconnaissance of Mars. In 2011, the Kennedy team launched the Mars Science Laboratory with its Curiosity rover now studying the surface. In 2013, the Mars Atmosphere and Volatile EvolutioN, or MAVEN, spacecraft was launched from Cape Canaveral and now is orbiting the Red Planet. Scheduled for launch in 2016, the InSight mission will launch a lander to Mars designed to drill beneath the surface and investigate the planet’s deep interior.

“Allowing industry to provide our transportation to low-Earth orbit, means the NASA team can focus on what we do best – exploration,” said Cabana. “We’ve got a lot of work going on here at Kennedy as we advance the mission to put boots on Mars.” 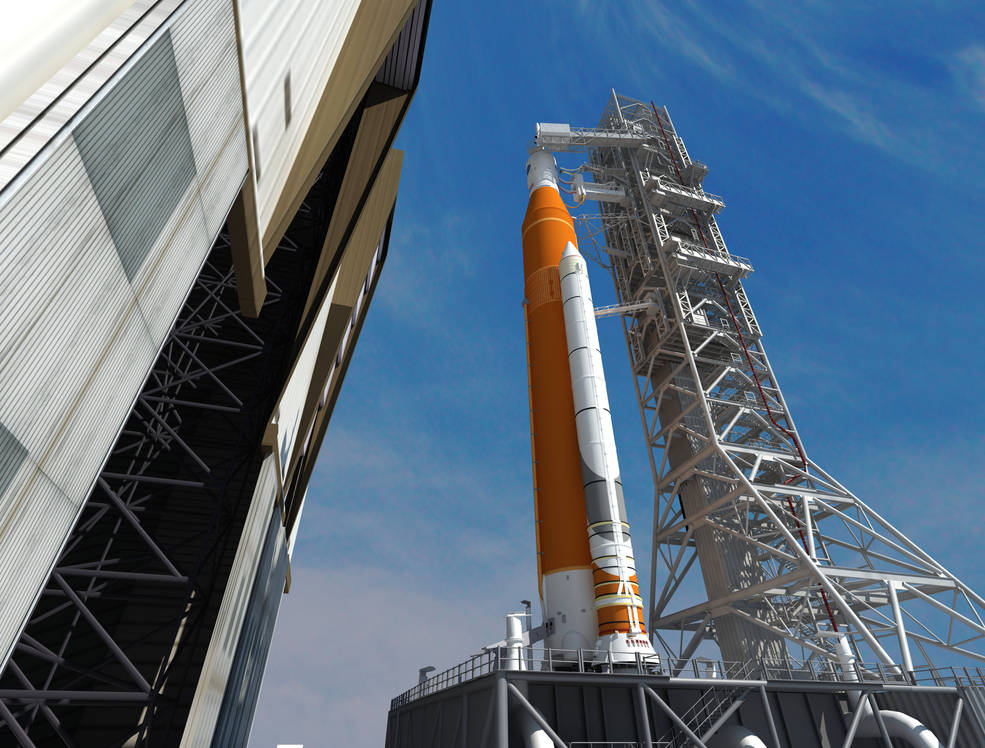 This artist concept depicts the Space Launch System rocket rolling out of the Vehicle Assembly Building at NASA’s Kennedy Space Center. SLS will be the most powerful rocket ever built and will launch the agency’s Orion spacecraft into a new era of exploration to destinations beyond low-Earth orbit. Credits: NASA/Marshall Space Flight Center