Kontron, a provider of embedded computing technology, announced the expansion of the KBox IPC series. The new Kontron KBox IPCs have been developed especially for industrial control applications and are highly scalable. The new systems of the KBox family will be available on a long-term basis and can be upgraded with industrial I/Os, Fieldbusses and/or Industrial Ethernet interfaces as needed. Thanks to the modular structure on the basis of company-internal standard component groups, the CPU selection is very flexible and always up to date. Automation providers and OEM customers in the field of mechanical and plant engineering will thus benefit from highly efficient customisation options on the basis of standardised component groups. Apart from the KBox C-101, which has already been introduced, two more compact variants of this high-end IPC will become available in the future. In addition to the Intel Core i5/i7 CPUs of the fourth generation, the KBox C-101 variants now also come with the embedded Celeron CPU 2002E. The KBox C-101 family impresses users especially with its maintenance-free design, which delivers features such as a structure entirely without fan and battery as well as 10 ms hold-up time. 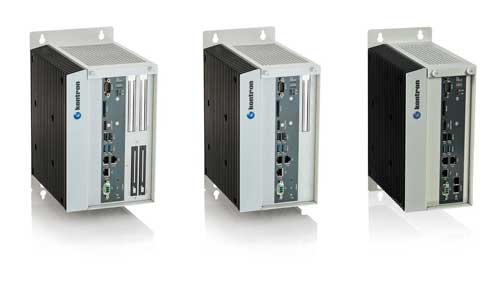 For the first time, KBox C-101, the performance flagship of the entire KBox IPC family, is introduced in the ultra-compact variant KBox C-101-0 without PCIe slots at the front. This variant additionally offers an internal SATA port for HDD/SSD, two internal mSATA slots and three mini PCIe slots. Moreover, like all KBox C-101 versions, the system has three IEEE1588 Gbit Ethernet ports, two USB 3.0 and USB 2.0 ports, a DisplayPort, an RS232 interface and an SDCard slot. The third version, the new KBox C-101-1supplements the portfolio with a PCIe x4 extension slot and, optionally, a removable SSD/HDD at the front.

Kontron also shows interested visitors the models of the KBox series that are already available. The control computer KBox C-100with pre-integrated 128 kB NVRAM supports soft PLC and hypervisor technologies. The system is scalable from Intel Celeron up to Intel Core i7 CPUs of the third generation and is suitable for deployment as real-time control and virtualisation computer at the process level of the automation pyramid. KBox C-100 is equipped with four IEEE1588-compliant Gbit Ethernet interfaces, seven USB 2.0 ports, one RS232 port, one DVI and one PCIe x1 extension slot for Fieldbus and Industrial Ethernet interfaces.

Kontron KBox A-101, which is designed for cost-sensitive automation and industry computing tasks, stands out with its maintenance-free design and a robust, fast SSD. The fanless box PC with the dual-core Intel Atom CPU D2550 comes with the standard interfaces DisplayPort, two Gbit Ethernet ports, two USB 3.0 ports, two USB 2.0 ports and one RS232 port. Despite the compact footprint, custom interface layouts are possible via the integrated mini-PCIe slot. Optionally, KBox A-101 is available with CAN bus and two WIFI aerial connections at the back of the housing.

Designed for IoT tasks, Kontron KBox A-201 is marked by its maintenance-free design and optional wireless interfaces. The fanless box PC with Intel Atom CPU E3845 comes with the standard interfaces HDMI, two Gbit Ethernet ports, two USB 2.0 ports and three serial ports. Despite the compact footprint, custom interface adjustments are possible via the integrated mini-PCIe slot. Optionally, KBox A-201 is available with CAN bus and three aerial connections. To facilitate control cabinet applications, all connections come out on one side.