An F-22 Raptor from Tyndall Air Force Base, Fla., sits on the flightline while a Raptor launches from the Tyndall runway Dec. 10, 2015, during Checkered Flag 16-1. The week-and-a-half long exercise focuses on the involvement of the F-22 Raptor, F-35A Lightning II’s and legacy aircraft training in a large-force exercise to enhance combat airpower capabilities. (U.S. Air Force photo/Senior Airman Sergio A. Gamboa)

Checkered Flag 16-1, a large-force exercise which gives a large number of legacy and fifth-generation aircraft the chance to practice combat training together, started here Dec. 10.

The week-and-a-half long exercise focuses on the involvement of the F-22 Raptor, F-35A Lightning II’s and legacy aircraft training in a large-force exercise to enhance combat airpower capabilities.

“This exercise is a building block,” said Col. Joseph Kunkel, the 325th Fighter Wing vice commander and Checkered Flag commander. “We are at the very beginning of the integration of F-22s, F-35s and fourth-generation aircraft. What this does is lead us to the next step and that next step is to be extremely lethal in combat.” 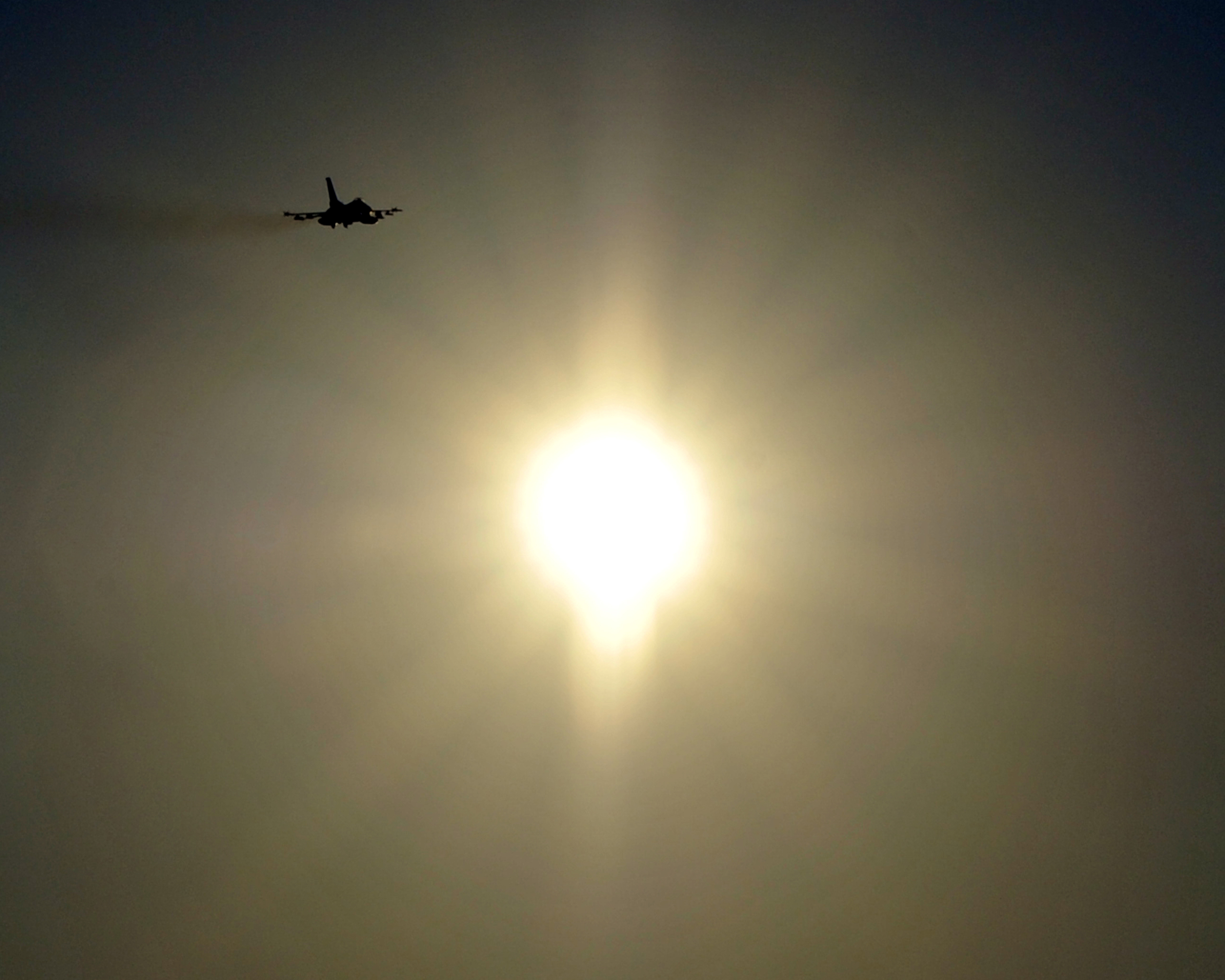 An F-16 Fighting Falcon from Eielson Air Force Base, Alaska, takes off from Tyndall AFB, Fla., Dec. 10, 2015, during Checkered Flag 16-1. Checkered Flag is a large-force exercise that simulates employment of a large number of aircraft from a simulated deployed environment. (U.S. Air Force photo/Senior Airman Sergio A. Gamboa)

“It is amazing, and it warms my heart to see the number of airplanes. The fact that we are going to be able to integrate with them on a daily basis is incredible,” Kunkel said.

Getting all the different aircraft to participate in this large-scale exercise was not easy.

A key challenge was successfully communicating to bring all that combat airpower together at the same time, he said.

“The Air Force makes things like this look real easy, but the level of integration we are seeing here is really complex and requires years of training from a number of different people,” Kunkel said. “There is going to be a lot of close coordination between fourth- and fifth-generation aircraft during this exercise, and what you are seeing is the fulfillment of years of work.” 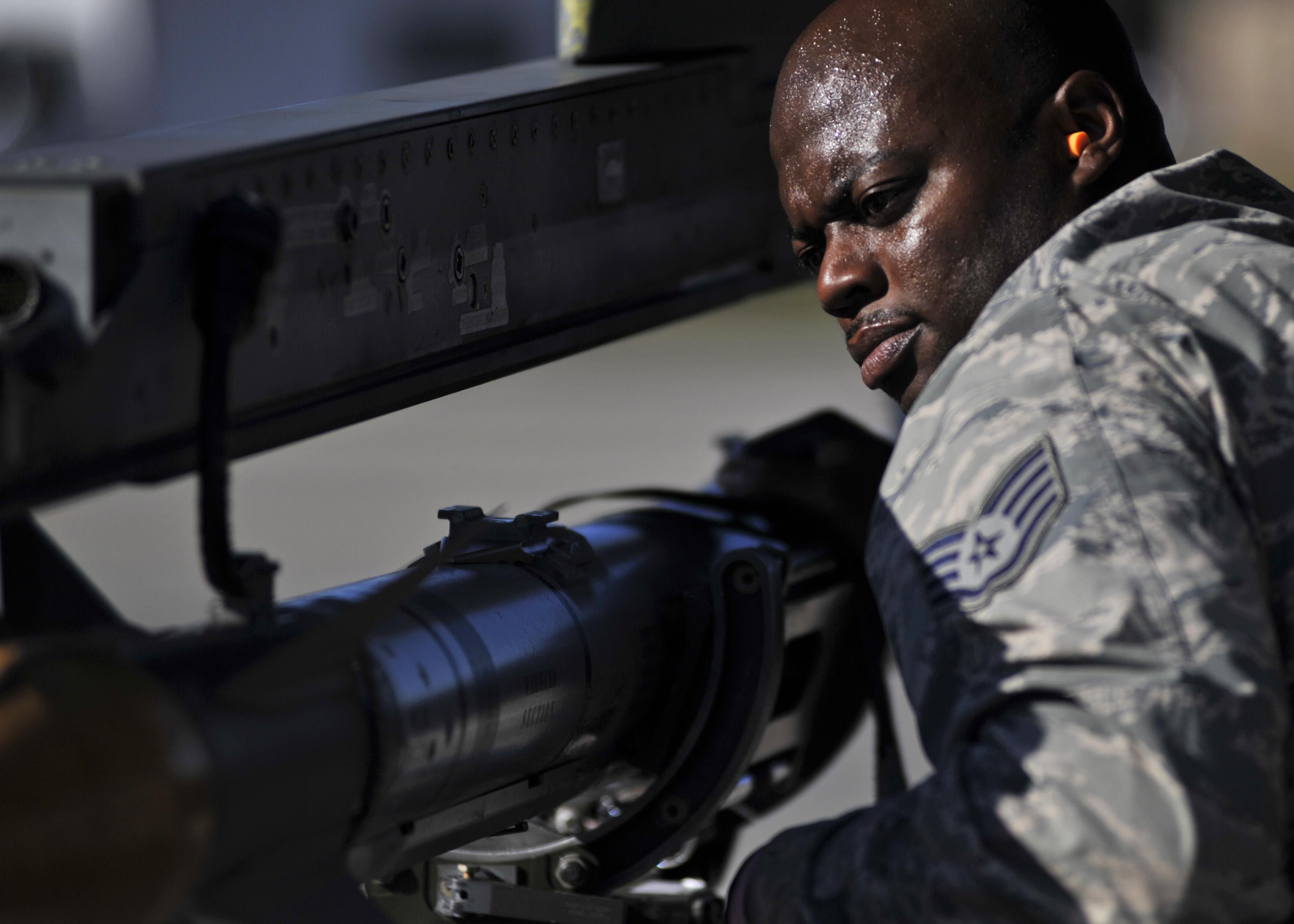 An aircraft armament Airman with the 77th Aircraft Maintenance Unit at Shaw Air Force Base, S.C., begins to unload a missile Dec. 8, 2015, on the flightline at Tyndall AFB, Fla. Airmen from Shaw were at Tyndall for the 53rd Weapons Evaluation Group’s Weapons System Evaluation Program and Checkered Flag 16-1. (U.S. Air Force photo/Senior Airman Sergio A. Gamboa)

“The biggest way that Checkered Flag helps the Airmen is through exposure,” said Lt. Col. Matthew Bradley, the 83rd Fighter Weapons Squadron commander. “If you’re an F-16 fighter pilot at Shaw, you don’t see F-35s, F-22s, B-52s or the E-3 often. So to bring them all together to one place and mission plan together increases everybody’s capabilities.”

Bradley’s role in the exercise is mixing tenses to co-host, alongside with the 325th FW, the exercise that coincided with a Weapons System Evaluation Program (WSEP) in order to save the Air Force money.

“The biggest thing I am looking forward to is how the F-35 enhances the other aircraft and Airmen’s capabilities,” Bradley added. “We have yet to see the F-35 really interact with this many aircraft. So, the biggest lessons learned are what it brings to the fight and how it increases everyone else’s combat capability.”

The combination of fourth- and fifth-generation aircraft abilities during Checkered Flag brings better situational awareness to the Air Force.

“This exercise provides a lot of things for the Air Force. One of them is a proof of concept that we can integrate a large number of aircraft to include F-22s, F-35s and fourth-generation aircraft,” Kunkel said. “It also proves to the world that we have the capability of unrivaled combat airpower.”

The WSEP and the 83rd FWS are a mission and geographically separated unit of the 53rd Wing, headquartered at Eglin.