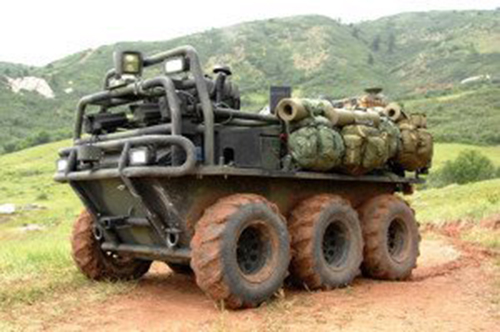 On the eve of AUVSI’s Xponential trade show, Lockheed Martin opened the doors of its Robotics Testing facility in Dallas to the media for demonstrations of several of their autonomous vehicles designed for battlefield support. The six-wheeled SMSS and the Site Shuttle gator were the stars of the event, which also gave reporters a chance to look at the scarily perceptive vehicles and UAVs on the lot.

Chris Van Buiten, vice president of Sikorsky Innovations, first discussed the roadmap Lockheed Martin has had for several years when it comes to transitioning vehicles to autonomous operation. Vehicles like the Site Shuttle are “optionally piloted,” a designation Sikorsky is also seeking for its helicopters. For the last six years, Sikorsky has been working on producing a system that could be switched from two-pilot mode to single-pilot or fully autonomous with the push of a button.

The Sikorsky Autonomous Research Aircraft (SARA) is a step in this direction. Currently undergoing testing on vehicles including the Black Hawk helicopter, SARA allows a pilot to control the vehicle from a tablet. The tablet can be used from inside or outside the cockpit, making the transition to autonomous operation simple. One of the goals of SARA is also to cut down on pilot training time for the specialized work of flying the helicopter, since the autonomous system does the majority of the work.

Analyzing the massive amount of data that comes in as a result of that work is a challenge unto itself. Lockheed Martin addresses this with Hydra Fusion Tools, a suite of capabilities that makes 3D maps from data gathered by an autonomous vehicle. Hydra Fusion Tools can be used to generate 3D images in real-time and is the only program in the industry capable of doing so. It is applicable to both military applications and commercial uses, such as agriculture, rail or utilities.

One of the most dramatic illustrations on the military side was the Squad Mission Support System (SMSS), a six-wheeled “mule” vehicle that has been part of Lockheed Martin’s portfolio since 2011. It demonstrated the ability to follow a human operator and lay down GPS makers, which can be used to track the vehicle or for it to retrace its own path. SMSS also has obstacle detection and can traverse steep hills, rocky ground, or soft sand. The test bed included an area covered with 1 meter of sand. One thing it isn’t is quiet; the diesel engine, which can also run on JP-8 jet fuel depending on what the operators have available, makes a pretty loud buzz.

We’ll be taking a look at some of the drones demonstrated at the event in more detail later on, including the new Indago 3. These include both military and commercial builds of the Striker XE, the Desert Hawk, and Global Hawk reconnaissance drones, and Vector Hawk, a modular drone designed for quick deployment. Lockheed Martin is currently working with a customer who wants to be able to swap out rotary blades for the wings currently sported by the Vector Hawk.

Lockheed Martin’s Dallas facility includes the testing arena which was open to the press day, as well as about 30 acres of additional land for robotics testing.