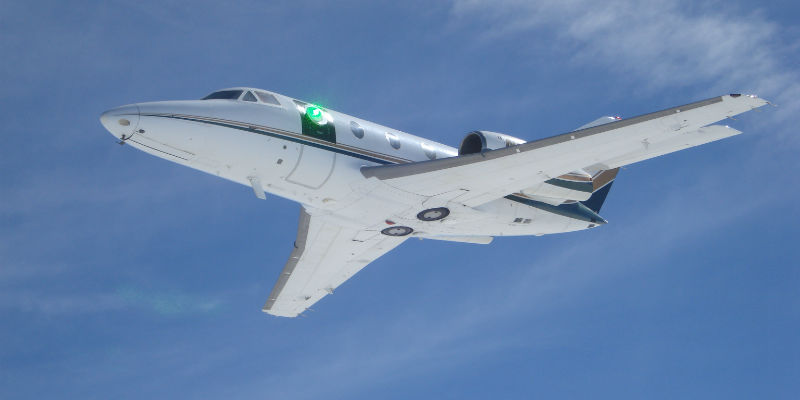 Because enemy aircraft and missiles can come from anywhere, a laser weapon system on a military aircraft will need to be able to fire in any direction.

However, the laws of physics say that a laser only can engage targets in front of an aircraft that is travelling close to the speed of sound – unless atmospheric turbulence can be counteracted.

The Aero-adaptive Aero-optic Beam Control (ABC) turret is the first turret ever to demonstrate a 360-degree field of regard for laser weapon systems on an aircraft flying near the speed of sound. Its performance has been verified in nearly 60 flight tests conducted in 2014 and 2015 using a business jet as a low-cost flying test bed. As the aircraft travelled at jet cruise speeds, a low-power laser beam was fired through the turret’s optical window to measure and verify successful performance in all directions.

The design uses the latest aerodynamic and flow-control technology to minimize the impacts of turbulence on a laser beam. An optical compensation system, which uses deformable mirrors, then is used to ensure that the beam can get through the atmosphere to the target. Left unchecked, turbulence would scatter the light particles that make up a laser beam, much like fog diffuses a flashlight beam.

“This advanced turret design will enable tactical aircraft to have the same laser weapon system advantages as ground vehicles and ships,” said Doug Graham, vice president of missile systems and advanced programs, Strategic and Missile Defense Systems, Lockheed Martin Space Systems. “This is an example of how Lockheed Martin is using a variety of innovative technologies to transform laser devices into integrated weapon systems.”

DARPA and AFRL will use the results of the flight tests in determining future requirements for laser weapon systems on high-speed aircraft and expanding their effectiveness.

Lockheed Martin is positioning laser weapon systems for success on the battlefield because of their advantages of speed, flexibility, precision and low cost per engagement. The corporation’s advances include the development and demonstration of precision pointing and control, line-of-sight stabilization and adaptive optics and high-power fiber lasers.