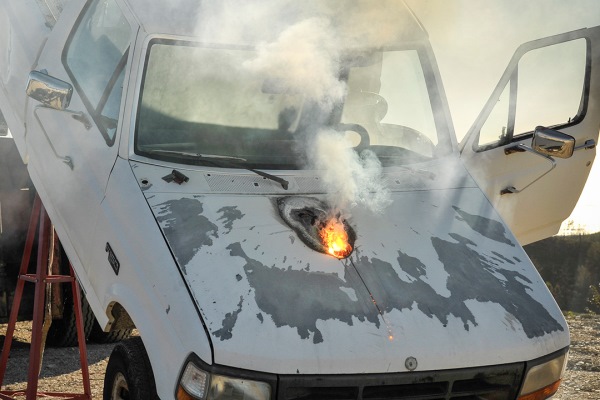 The Bethesda, Maryland-based company displayed its 30-kilowatt Advanced Test High Energy Asset at the annual conference of the Association of the United States Army, an Arlington, Virginia-based advocacy group for the service.

The fiber optic laser drew curious onlookers throughout the three-day event. Called Athena, it recently entered production for the Army and could enter the combat zone next year.

Lockheed earlier this year announced that it had successfully field-tested the technology by burning a hole through the running engine of truck in seconds from more than a mile away (see photo above).

The technology is based on the Area Defense Anti-Munitions (ADAM) laser weapon developed for small airborne and sea-based targets and incorporates Accelerated Laser Demonstration Initiative (Aladin) fiber laser, according to the company.

In addition to the ground service, the Air Force and Navy are also interested in finding ways to equip their platforms with laser weapons.

In September, Lt. Gen. Bradley Heithold, the head of Air Force Special Operations Command, said he wants to put a 120-kilowatt laser weapon on a next-generation AC-130J Ghostrider gunship by the end of the decade.

And last year, the Navy tested a 20-kilowatt laser aboard the amphibious transport ship USS Ponce.