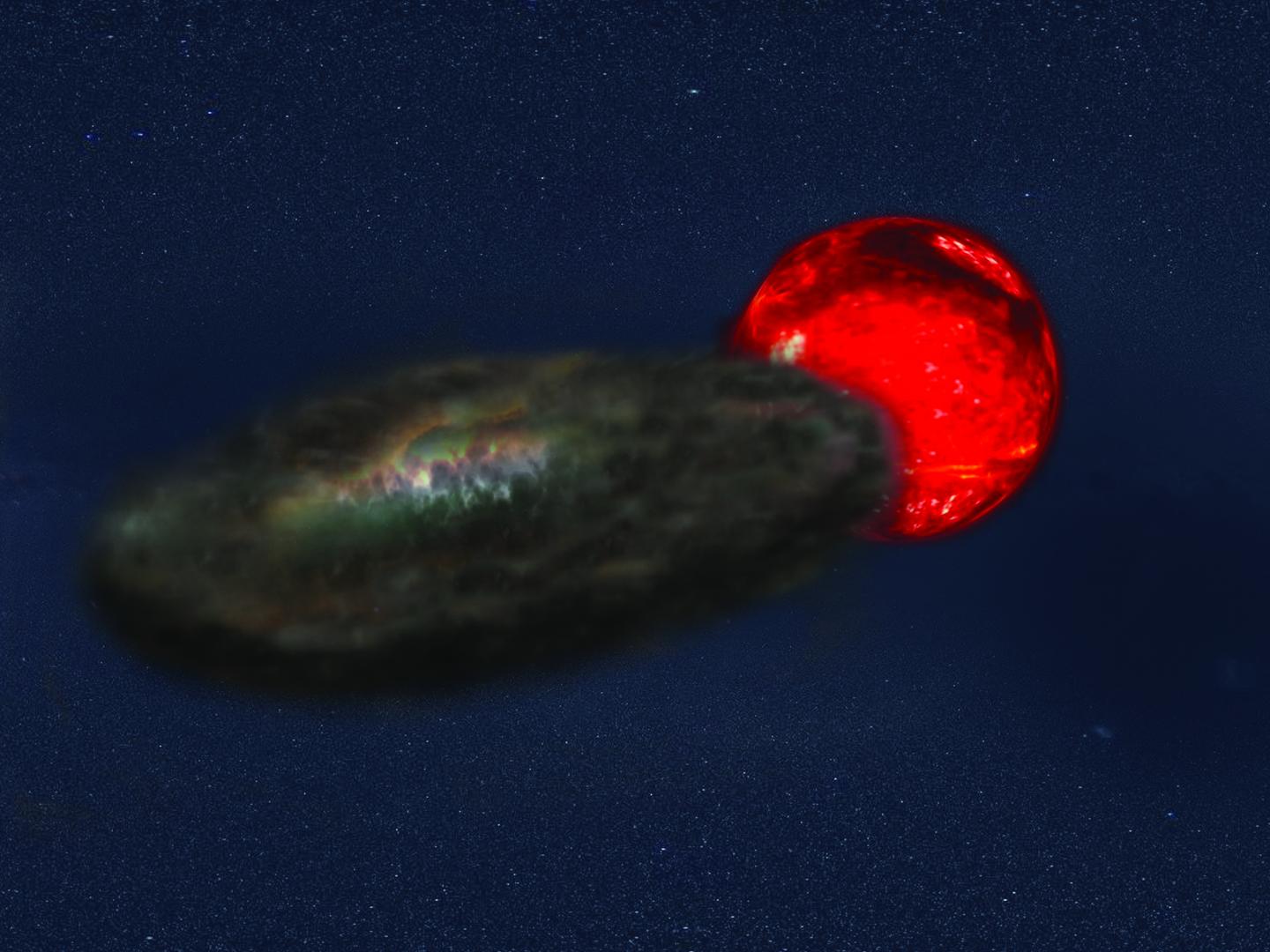 Imagine living on a world where, every 69 years, the sun disappears in a near-total eclipse that lasts for three and a half years.

That is just what happens in an unnamed binary star system nearly 10,000 light years from Earth. The newly discovered system, known only by its astronomical catalog number TYC 2505-672-1, sets a new record for both the longest duration stellar eclipse and the longest period between eclipses in a binary system.

Discovery of the system’s extraordinary properties was made by a team of astronomers from Vanderbilt and Harvard with the assistance of colleagues at Lehigh, Ohio State and Pennsylvania State universities, Las Cumbres Observatory Global Telescope Network and the American Association of Variable Star Observers and is described in a paper accepted for publication in the Astronomical Journal.

The previous record holder is Epsilon Aurigae, a giant star that is eclipsed by its companion every 27 years for periods ranging from 640 to 730 days.

“Epsilon Aurigae is much closer – about 2,200 light years from Earth – and brighter, which has allowed astronomers to study it extensively,” said Rodriguez. The leading explanation is that Epsilon Aurigae consists of a yellow giant star orbited by a normal star slightly bigger than the sun embedded in a thick disk of dust and gas oriented nearly edge on when viewed from Earth.

“One of the great challenges in astronomy is that some of the most important phenomena occur on astronomical timescales, yet astronomers are generally limited to much shorter human timescales,” said co-author Keivan Stassun, professor of physics and astronomy at Vanderbilt. “Here we have a rare opportunity to study a phenomenon that plays out over many decades and provides a window into the types of environments around stars that could represent planetary building blocks at the very end of a star system’s life.”

Two unique astronomical resources made the discovery possible: observations by the American Association of Variable Star Observers (AAVSO) network and the Digital Access to a Sky Century @ Harvard (DASCH) program.

AAVSO is a non-profit organization of professional and amateur astronomers dedicated to understanding variable stars. It provided a few hundred observations of TYC 2505-672-1’s most recent eclipse.

The DASCH survey is based on thousands of photographic plates taken by Harvard astronomers between 1890 and 1989 as part of a regular survey of the northern sky. In recent years the university has begun digitizing these plates. In the process TYC 2505-672-1 caught the eye of Sumin Tang at the Harvard-Smithsonian Center for Astrophysics.

Rodriguez attended a conference where Tang presented her results on TYC 2505-672-1 and the system piqued his interest as well. He is a member of the survey team for the low-cost Kilodegree Extremely Little Telescope (KELT) system that consists of a pair of robotic telescopes designed to find exoplanets around bright stars operated by astronomers at Ohio State University, Vanderbilt University, Lehigh University and the South African Astronomical Observatory. KELT has an extremely wide field of view (26 degrees by 26 degrees) and he thought it was likely that the KELT database contained a number of recent images of the distant binary system.

After the lecture Rodriguez contacted Tang and they agreed to collaborate. When he searched the KELT database, Rodriguez found about 9,000 images of the obscure system taken in the last eight years that they could combine with the 1,432 images taken over the last century at Harvard. Rodriquez also contacted the AAVSO network and obtained several hundred more observations of the system’s most recent eclipse to help fill in the picture. When she became busy with some other projects, Tang agreed to let Rodriguez take the lead.

The resulting analysis revealed a system similar to the one at Epsilon Aurigae, with some important differences. It appears to consist of a pair of red giant stars, one of which has been stripped down to a relatively small core and surrounded by an extremely large disk of material that produces the extended eclipse.

“About the only way to get these really long eclipse times is with an extended disk of opaque material. Nothing else is big enough to block out a star for months at a time,” Rodriguez said.

TYC-2505-672-1 is so distant that the amount of data the astronomers could extract from the images was limited. However, they were able to estimate the surface temperature of the companion star and found that it is about 2,000 degrees Celsius hotter than the surface of the sun. Combined with the observation that it appears to be less than half the diameter of the sun has led them to propose that it is a red giant that has had its outer layers stripped away and that this stripped material may account for the obscuring disk. However, they don’t know that for certain.

In order to produce the 69-year interval between eclipses, the astronomers calculate that they must be orbiting at an extremely large distance, about 20 astronomical units, which is approximately the distance between the Sun and Uranus.

“Right now even our most powerful telescopes can’t independently resolve the two objects,” said Rodriguez. “Hopefully, technological advances will make that possible by 2080 when the next eclipse occurs.”