Orion Fans has developed a series of thermally-controlled AC and DC fans for cooling solid state lighting. The smart fans deliver high airflow to help prevent premature LED component failure due to excessive heat. The smart fans’ thermal controller increases or decreases the speed of the fans in response to the air temperature, significantly reducing power consumption by as much as 30%. Orion Fans’ LED thermal management solutions are available in multiple sizes and also include heat sinks and custom voltages when applicable. 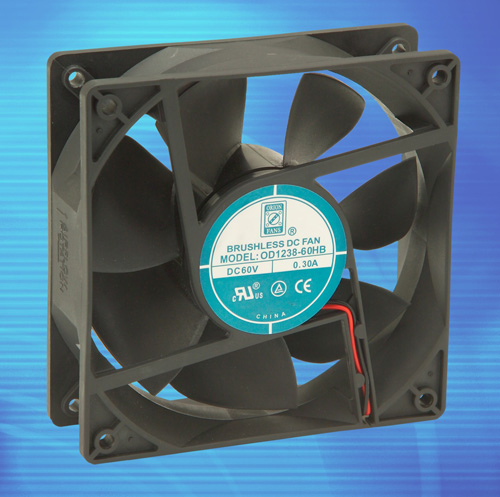 The thermally-controlled smart AC fans feature a ball bearing design that significantly reduced noise levels and delivers airflows ranging from 62-110 CFM for the OA109AP Series and from 103-212 CFM for the OA172SAP Series. Fans for LED cooling are available with high AC voltages of 308VAC and 480VAC, and custom DC voltages of 28VDC and 36VDC as well as standard DC voltages of 5,12,24,48 and 60VDC. The DC fans can be IP55-sealed for outdoor use or within harsh applications.