Researchers at Carnegie Mellon University have created a prototype smartwatch to illuminate a touchscreen onto your forearm, according to Tech Xplore. The built-in projector and watch consists of a logic board, projector, depth-sensing array, a metal enclosure and battery.

The prototype has been named LumiWatch. Chris Harrison, one of the watch’s developers, has created a homepage for the project, where a paper that provides details on the LumiWatch’s design and operation can be downloaded.

“Projectors have always been the most convenient way to create a temporary but large screen, which makes them the ideal way to improve the functionality of smartwatches where you only occasionally want a larger touchscreen,” said Andrew Liszewski in Gizmodo. “Most of the time I only want to see the time or who’s texting me when I glance down at my Apple Watch.”

The prototype is self-contained, which means it performs independent operations without connection to a smartphone or computer. The smartwatch itself measures about 50 millimeters, which is larger other smartwatches.

The watch design includes a Qualcomm APQ8026 system-on chip integrated with a 1.2GHz quad-core CPU, Bluetooth 4.0 and a WiFi controller. Inside the frame is a 15-lumen scanned-laser projector and time-of-flight depth-sensing array with Android 5.1, according to Wearable. The combined hardware and software delivers a 1024 by 600-pixel resolution touchscreen display on the arm. The touchscreen allows individuals to tap and swipe on their arm, replicating gestures used on a smartphone. The projected lighted display can been seen both outside and inside. 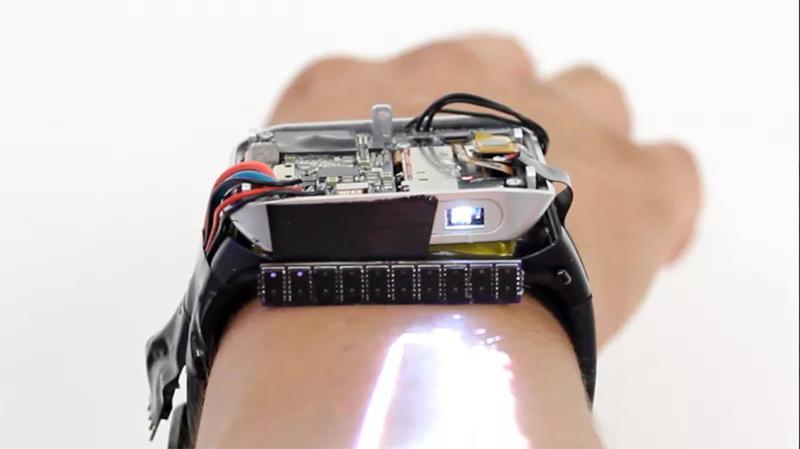 The LumiWatch prototype provides a projector feature that enhances the function of the smartwatch. Credit: Carnegie Mellon University & ASU Tech

The prototype gets its power from a 740mAh, 3.8 V lithium ion battery. The expectation is if there is intermediate usage throughout the day, the battery should last one day. The team also had to confront challenges with heat dissipation, since the size of smartwatches limits the heat dissipation capability. The battery is actually at the bottom of the watch body, this way there is not a lot of heat at the watch-skin interface.

In the future, they said their design could incorporate a metallic case that attaches the logic board and projector, dissipating heat to the user. Another idea they are considering is to redesign the watch and use the straps as heat sinks.

“The LumiWatch is the first smartwatch to integrate a fully-functional laser projector and sensor array, allowing a screen projected on a user’s skin to be poked, tapped, and swiped just like a traditional touchscreen,” said Gizmodo.