The COVID-19 pandemic permanently changed the way in which tens of thousands of businesses worldwide operate. It also changed how many view automation and digital transformation (DX) initiatives. The latter have proven helpful where businesses aim to make remote work for office personnel permanent; toggle operations from on to idled and back more nimbly; allow factory-floor social distancing in more convenient ways; and continually adapt to lingering supply-chain issues. DX programs deftly facilitate these and other shifts in business practices.

Core to DX capabilities are smart machines that accept commands originating from remote locations; simplify (with software and even AI-driven environmental mapping) reconfiguration as needed; and self-diagnose mechanical and programming issues. In fact, these characteristics are what differentiate smart machines from the merely automated. That’s applicable whether the equipment is a traditional machine that is stationary, a reconfigurable module, or industrial robot. Programming collaborative industrial robots (cobots) to satisfy such smart-machine tasks is especially simple.

Smart-machine communications simplify extraction of data and subsequent analytics, which is in sharp contrast with legacy SCADA systems that demand significant plant-manager attention.

The hardware at which core smart-machine capabilities are primarily localized for discrete automation include industrial controllers, HMIs, and motor drives. Intelligent versions of these components include onboard diagnostics and feedback-handling capabilities to support connected systems’ own data requirements. Case in point: Some inverters incorporate sensors to detect corrosive or dusty conditions in the operation setting; cooling-fan feedback wiring to track fan health; and connectivity ports with circuitry and firmware to facilitate a vast array of IIoT and AI communications.

Maintaining the security of connected machines

One legitimate concern that design engineers have about smart machines is their cybersecurity. After all, connectivity can serve as an avenue for hacking, virus plants, sabotage, and data breaches. Fortunately, standards and solutions abound to build security into smart-machine components. In the U.S., the National Institute of Standards and Technology (NIST) Information Technology Laboratory Applied Cybersecurity Division as well as the Department of Homeland Security’s National Cybersecurity and Communications Integration Center and Industrial Control Systems Cyber Emergency Response Team (ICS-CERT) provide frameworks for reducing the risk of unauthorized access to industrial systems. Then suppliers provide end users with monitoring tools (and oftentimes subscription services) to detect unexpected data downloads and abnormal machine behavior caused by malicious actors.

Ironically, unconnected equipment and smart machines having marginal or incomplete connectivity may be most vulnerable. That’s because such machines offer no visibility into emerging or active issues requiring immediate isolation. Equipment most affected by cybersecurity faults is that run unmonitored or lacking connectivity to receive regular security updates.

Because they’ve become increasingly cost effective, wireless communication protocols and sensors are now an important form of smart-factory IIoT connectivity — especially for machine monitoring. Wireless technologies are most justified where it’s important to detect faults in inaccessible or remotely located equipment as early as possible. One caveat is that low-speed equipment may necessitate specialty wireless sensors to serve this function. Wireless-based condition-monitoring functions are also justified where running equipment to failure is unacceptable — as when a facility has no second piece of equipment to execute a given task. The caveat here is that other smart-factory elements (such as aggregation and analytics systems) must be in place to extract actionable items.

The suitability of imparting smart-factory functions with wireless sensing depends in part on how often data must be collected. Due to the way in which wireless sensors either run on battery power or harvest energy, they can only intermittently collect and transmit measurements. That makes them most suitable for equipment such as pumps that continuously runs at a steady state. That said, monitoring motors on variable-speed axes is possible, as simple analyses can verify that frequency and resolution are within specification. Where a wireless sensor is to be used to monitor machine failures vis changes in operation vibrations, it must be capable of monitoring an appropriate frequency range.

Other forms of (and uses for) wireless connectivity

Appropriately deployed wireless solutions offer benefits beyond machine monitoring. These functions include smart-factory connectivity with enterprise systems as well as operational feedback for on-the-fly changes to machine functions — even that outputting customizable products.

Wireless products for these functions are often compatible with various standards. Consider wireless networking USB sticks that impart remote connectivity to industrial PCs. Some include options for WLAN and 4G/3G/2G mobile communications. The sticks work on mobile robots and automated guided vehicles (AGVs) and an array of other types of equipment needing wireless communications with a central controller or supervisory control and data acquisition (SCADA) system. Users can even monitor drive-based diagnostics for better preventive maintenance based on real-world application data containing information about the frequency of events.

Mobile machinery in agriculture, construction, and amusement-park installations have borrowed many smart-factory structures to impart autonomous capabilities to designs that once need one or more operators. Today’s off-the-shelf automation controllers in such settings can impart the wireless and safety technologies necessary to protect personnel and communicate with existing computer systems.

5G in particular holds promise for manufacturing operations that might benefit from cloud connectivity, because it has the needed bandwidth and stability for production grids — especially where it’s realized as a campus network. But because there are usually network connections available on all machine infrastructures, some don’t anticipate widespread 5G-based industrial networking anytime soon. That hasn’t stopped component and system suppliers from preparing for the eventuality of 5G in industrial settings. In fact, those priming for 5G technology adoption predict a concurrent expansion in augmented reality, virtual design, and AI. With the exponential increase in speed, many expect processing times up to 10 times faster than what what’s currently possible with industrial 4G systems. In fact, wireless 5G technologies are capable of supporting realtime control by an external server over complex processes — to execute processes as complicated as 3D printing, for example.

Industrial Ethernet-based protocols continue to overtake traditional fieldbuses for the messaging of data in automated installations … and in fact, Ethernet-based protocols are now employed in more than 40% of industrial networks. It’s true that some fieldbuses are more reliable than legacy Ethernet offerings that are nondeterministic, but Ethernet speeds lead. More specifically, some old bus systems only have data rates of 1 to 20 Mbit sans realtime capabilities, so have slowly lost market share to Ethernet-based options having rates of at least 100 Mbit. Of course, bus protocols are sufficient for many simple industrial tasks, so will see continued use for decades to come.

Ethernet data rates support tracking and processing of data in realtime. Plus unlike fieldbus and device networks necessitating various physical layers, Ethernet works off one … and now, Power over Ethernet (PoE) mentioned earlier lets design engineers make further use of that single physical layer. Especially at the intersection of IIoT and motion control, PoE connections lead. It was one difficult to get energy sufficient to power a motor from PoE connections … but the rapid adoption of higher-power IEEE standards in industrial Ethernet switches is supporting expansion here. The 802.3at standard for example provides 25 W of power to connected devices — which is enough to run a NEMA-14 step motor at full power. Some integrated motors for such arrangements accept power and communications via one of two standard Ethernet cables (RJ45 or X-coded M12) and support common networking protocols such as Modbus TCP and EtherNet/IP. In fact, Ethernet-based connectivity is often in the form of EtherNet/IP. This application-layer protocol allows communication between controls and I/O; certain adaptations allow synchronized and deterministic multi-axis motion control. 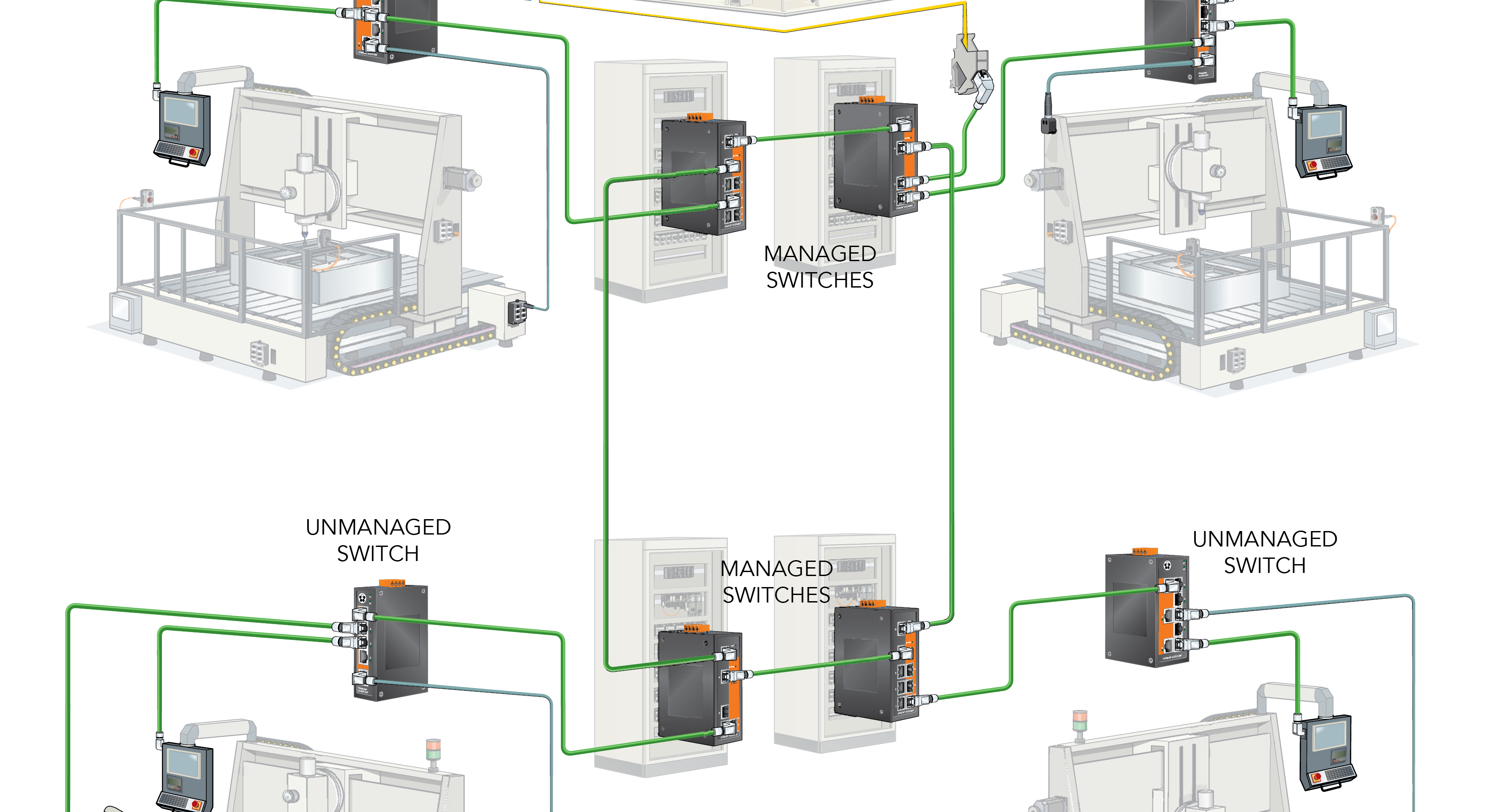 Though the internet of things is most visible to laymen in consumer devices, the IIoT is massive. The majority of applications are in business, factory, and healthcare settings … and more than a third of the nearly $6 trillion IoT market is in manufacturing.

Shown here: ETHERLINE ACCESS PROFINET switches from LAPP are configurable via a web interface. They help where high transmission rates are required over long distances … and have RJ45 ports as well as small form-factor pluggable (SFP) ports for fiber-optic cables and fast Gigabit Ethernet. Some convert the light signals of fiber optics into electrical signals for 100 Mbit/sec or 1 Gbit/sec and single-mode or multi-mode transmission. Otherwise an ETHERLINE ACCESS U04TP01T switch in this line (ruggedized for mounting near field devices) has four RJ45 ports with Power over Ethernet (PoE) and one port for fast Ethernet. Read more about these offerings here.

In manufacturing, adaptability is the only way forward 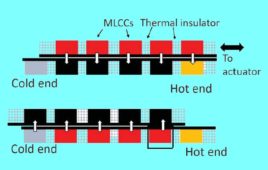