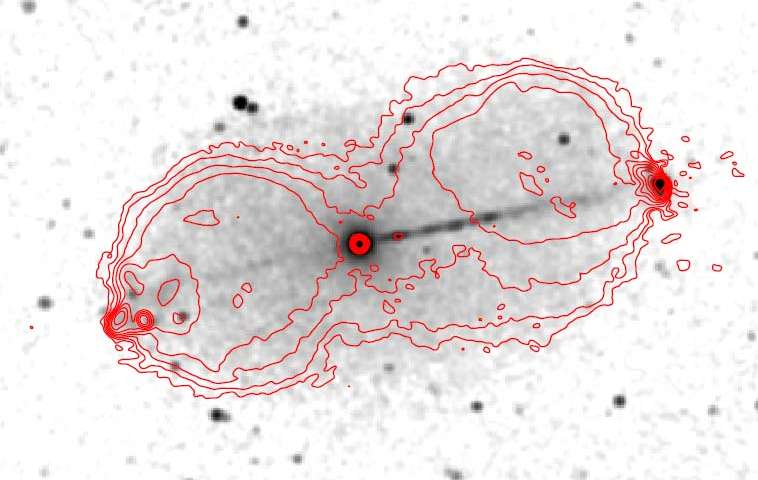 X-ray jets from the galaxy Pictoris A. The greyscale image was taken by the Chandra X-ray Observatory and reveals the detailed X-ray structure of the jets, which extend over nearly one million light-years. The red contours show the radio emission. Astronomers analyzing these and other data have concluded that the X-ray emission is produced by rapidly moving charged particles in magnetic fields. Credit: NASA/Chandra, Hardcastle et al.

Super-massive black holes at the centers of galaxies can spawn tremendous bipolar jets when matter in the vicinity forms a hot, accreting disk around the black hole. The rapidly moving charged particles in the jets radiate when they are deflected by magnetic fields; these jets were discovered at radio wavelengths several decades ago. In the most dramatic cases, the energetic particles move at speeds close to the speed of light and extend over hundreds of thousands of light-years, well beyond the visible boundaries of the galaxy. The physical processes that drive these jets and cause them to radiate are among the most important outstanding problems of modern astrophysics.

One of the most significant and unexpected discoveries of the Chandra X-ray Observatory was that bright X-rays are also emitted by these jets. The X-rays are also produced by the acceleration of charged particles, at least according to some models, but there are other possible mechanisms as well. Fast-moving particles can scatter background light, boosting it into the X-ray band. Alternatively, shocks can generate X-ray emission (or at least a significant portion of it), either as the jets interact with stellar winds and interstellar medium or, within the jet, as a consequence of jet variability, instability, turbulence, or other phenomena.

CfA astronomer Aneta Siemiginowska and her colleagues have studied the bright radio jet galaxy Pictoris A, located almost five hundred million light-years away, using very deep Chandra measurements – the observations used an accumulated total of over four days of time, spread over a fourteen year period. These data enabled the first detailed analysis of the spectral character of the emission all along the jets. The emission turns out to be remarkably uniform everywhere, something that is extremely unlikely if scattering were responsible, but which is a natural consequence of the magnetic field process. The scientists therefore reject the scattering model in favor of the latter. However, the jets do have within them many small clumps, internal structures, and lobes. Shocks and/or scattering are possible explanations for the emission in some of these structures.

Although these new results represent some dramatic improvements in our understanding of Pic A, high-resolution radio measurements of a large sample of similar jets are now needed to refine and extend the models. Large-scale X-ray jets, for example, have been also detected in very distant quasars. The results from Pic A, together with future Chandra observations, will help astronomers determine the extent to which these distant jets also rely on the same processes, or if they invoke other ones.