Federal immigration officials granted a six-month reprieve on Thursday to a Connecticut immigrant facing deportation, a move his supporters say won’t be long enough to allow him to undergo a scheduled kidney transplant.

Dozens of people, including Democratic Gov. Dannel P. Malloy, rallied in front of U.S. Immigration and Customs Enforcement offices in Hartford in support of Nelson Rosales Santos, 49, who was scheduled to be deported to Honduras on Monday, despite suffering from advanced renal failure.

Some held signs that read, “Where is Our Humanity” and “Stop Separating Families.”

Santos received the stay of deportation from ICE officials just hours before the gathering.

“This case should be treated differently,” said Malloy. “After all, we were told by our president and attorney general that they were only going to go after the bad hombres. Well, he’s not a bad hombre.”

His family and supporters say Santos entered the country illegally but has lived in Stamford for 30 years, is married to a U.S. citizen and has three children, ages 19, 14 and 11, who all were born in the U.S.

If Santos is forced to fly to Honduras, a country he has not seen in three decades, he would not have immediate access to dialysis and likely would be dead within a week, said his attorney, Glenn Formica.

“I don’t want to die,” Santos said Thursday. “My kids and wife need me.” 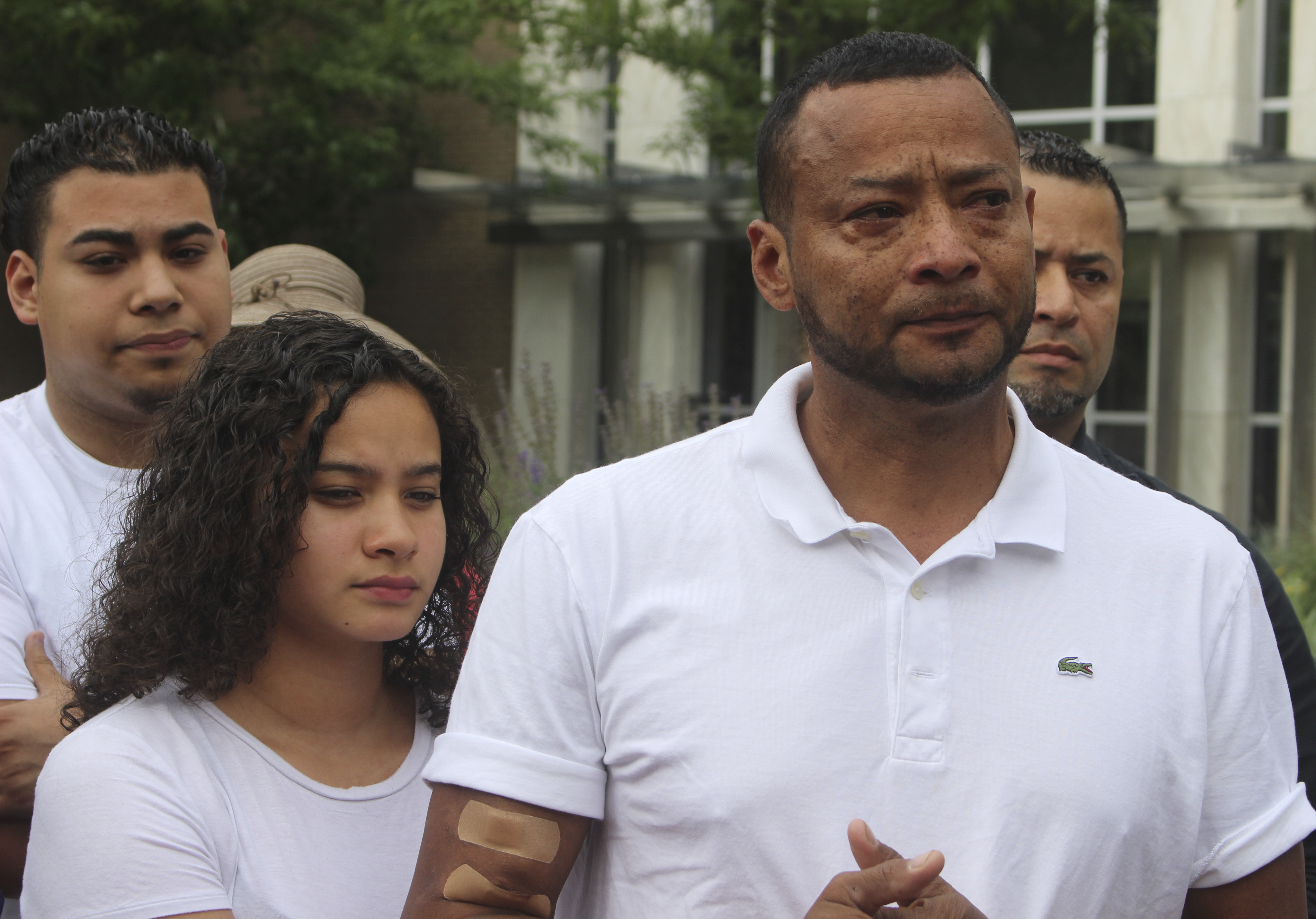 Nelson Rosales Santos, 49, an immigrant who lives in Stamford, Conn., stands next to his 14-year-old daughter, Samantha, at rally outside the federal bridling in Hartford, Conn., on Thursday, June 14, 2018. Santos, who suffers from renal failure, received a six-month stay of a deportation order that advocates say would have amounted to a death sentence. (AP Photo/Pat Eaton-Robb)

Federal immigration officials had no immediate comment on Santos’ situation.

Santos works as a chef and has routinely received waivers allowing him to stay in the U.S., his supporters said.

His wife has successfully petitioned immigration officials to allow her husband to be considered for permanent resident status. But because of his 30-year-old deportation order, he was told he must leave the country during that process, said Catalina Horak, who is working on Santos’ behalf with the immigration support group, Building One Community.

Formica said he was filing two separate requests to delay Santos’ deportation. The first, before the federal Board of Immigration appeals, argues that the original deportation order was defective. The second, before ICE, requested the humanitarian stay of the deportation to allow Santos to receive a new kidney. He said he will seek to extend that stay to at least 12 months.

“I just don’t believe we are this vicious as a country,” Formica said. “This policy speaks otherwise.”

Santos, who has private insurance through his wife, had a surgery date scheduled for later this month, but doctors told him they would not do the procedure until they receive assurances that he will be available for 12 months of follow-up visits and treatment, Horak said.

Santos is willing to leave the country as required while awaiting his green card, Horak said, but can’t do that until his medical situation is resolved.

“He works, he has insurance, he has a private donor,” Horak said. “He’s not doing this on anyone else’s dime. He has an avenue for legalizing his situation. That’s what makes this case so compelling.”

Santos thanked his supporters at the rally and had a message for President Donald Trump.

“Try and be nice to the people,” he said.