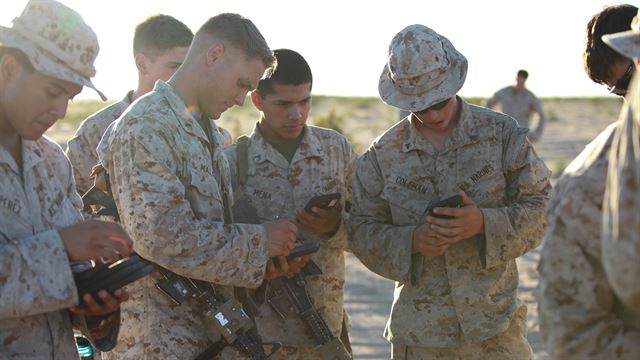 The Mobility JCTD was conducted to further develop and implement tablet and handheld technology to advance the warfighter.

Employees of Samsung Knox, Kranze Technology Solutions, Green Hills Software, Marine Corps Warfighting Lab and others were briefed to get a better understanding and explain their respective roles in the technology’s future.

“JCTD has been illustrating the use of handheld devices in support of (Marine Air Ground Task Force) elements, from a squad level all the way to the air crew,” said Maj. Jim Foley, plans officer for Ellis Group, Marine Corps War Fighting Lab.

The Marine Corps has been using tablets for several years now and select units like the Special Purpose Marine Air Ground Task Force – Crisis Response and 15th Marine Expeditionary Unit have already implemented its use operationally.

“If you look at a SPMAGTF-CR with areas of operation of over 1,000 miles they are able to use that device to reference where they’re going,” said Foley. “The Marines can talk to each other and share updates so that when they land they have a better situational awareness to where they are as well as to where their aviation assets are.”

KILSWITCH gives Marines in the air and ground real-time situational awareness by using a map similar to Google maps but without having to be connected to a server.

“So ultimately, they created an application where you can do a digital nine line and call for fire rapidly to attack the enemy in support of not only dismounted troops but any unit in contact,” said Maj. Scott Cuomo, Marine Air Ground Task Force planner and ground combat element integration officer, Headquarters, Marine Corps Aviation. “They have a satellite view of their surroundings, helping them pinpoint their location on a map as well as identify enemy targets faster and more accurately than ever before.”

Using commercial off-the-shelf encrypted wireless technology and linking it to the radios enables Marines within Wi-Fi distance to talk wirelessly through the tablets like instant messaging.

“Using the tablets allows us to better respond to crises,” said Foley. “We’re leveraging the technology to allow us to have better situational awareness on a much broader scale.”

The Marine Corps strives to continue to keep Marines better equipped with the latest technology to help Marines react to any crises anywhere in the world.

In the future, if satellite communication systems were to go down, the tablets would help Marines create small networks throughout the battlefield, which would allow them to maintain situational awareness and the ability to talk amongst each other potentially saving lives and creating a more lethal rifle squad.

“It’s [tablet technology] enabling us to do our job better in an ever increasingly chaotic world,” said Cuomo.