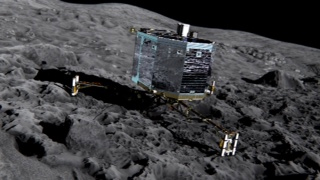 After more than ten years of travel through space, the European space probe Rosetta has reached the comet Chury. Three months from now, for the first time in the history of space travel, a lander will touch down on the surface of the four-kilometer-wide comet. DC motors manufactured by maxon are part of this pioneering feat.

On August 6th, the big day finally arrived: After a journey of more than ten years, the Rosetta space probe reached the comet 67P/Churyumov-Gerasimenko, known as “Chury”. The mission team at the European Space Agency (ESA) jumped for joy. For the first time in the history of space travel, a probe has rendezvoused with a comet. It will now orbit and map the comet and gather various types of data. Already, the first images received have yielded astonishing new insights: The comet Chury, which is four kilometers wide, is not round or oval, but instead looks like two rocks loosely stuck together. At minus 70°C, the surface is much warmer than expected and the first information indicates that it is covered with a black layer of dust.

Rosetta will now gradually approach the comet, until a distance of only 10 kilometers separates them. The most difficult part of the mission will take place in mid-November 2014, when the Philae lander is scheduled to touch down on Chury. It will be the first controlled landing on a comet. A real pioneering feat – and maxon motor is part of it, with a DC motor on board. This is not the first time that the micro drives from Switzerland have been the first choice for space missions. SpaceX’s Dragon spacecraft, which transports cargo to the ISS station, also contains maxon motors. The same holds true for the Mars rovers, which have been diligently traveling across the surface of the red planet for many years.

Filed Under: TECHNOLOGIES + PRODUCTS, ALL INDUSTRIES
Tagged With: maxonmotor