To start patenting spinal implant and surgical instrument designs, Lukas Eiserman, owner and president Eisertech LLC, decided to purchase a small CNC machine he could use himself rather than a rapid prototyping machine. With this move, he eliminated waiting for prototypes to be machined by contractors.

He quickly settled on the Tormach PCNC 1100 because it was the heaviest duty machine in its class. His plan was to make the prototypes and shop them around to other implant manufacturers.

“It wasn’t very long before a few orthopedic surgeon friends talked me out of that idea and encouraged me to start an implant manufacturing company,” Eiserman said. “So I ended up with a Tormach mill and what I thought would be something to just make a few prototypes is running production implants now.” 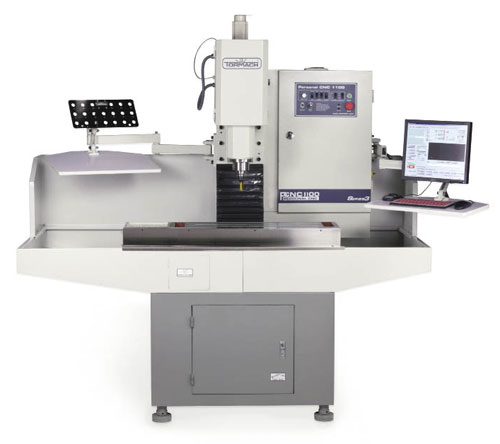 When he decided to start his own medial device business, Lukas Eiserman, owner and president Eisertech LLC, found that he could use his Tormach PCNC complete with a Duality Lathe, for small part production instead of shopping it out to contract manufacturers.

The Tormach PCNC 1100 personal CNC mill is powered by a 1.5-hp motor and cuts materials such as plastic, steel, iron, stainless, and titanium. It features a 5140-rpm, R8 spindle with a 33⁄8in. nose diameter, Sensorless Vector Control and foldback logic that senses when the spindle motor is having difficulty maintaining the programmed speed due to excessive cutting loads. It reduces the commanded motor speed temporarily to maintain adequate cutting torque. 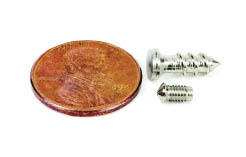 Prototype titanium bone screws designed by Eisertech and made with the Tormach PCNC 1100.

Once production was on schedule, Eiserman purchased a Tormach Duality Lathe to prototype titanium bone screws and stainless steel surgical instruments. Once again, the plan was to use the lathe simply for prototypes but he was soon making 100 screws at a time. Each part required four or five tools, so he would have to jerry-rig the setup to spray the titanium parts with coolant.

Eiserman designed a gang tool setup for the Duality Lathe with a coolant manifold and mounted it to the clamping spindle collar on the PCNC 1100.

The Duality Lathe can be used in two operation modes: as a traditional manual mini-lathe and when mounted to at PCNC 1100 bed, as a small CNC prototyping lathe. In manual mode it offers infinitely variable speed with two gear ratios, 4-way tool post, tailstock and other accessories. In CNC mode, using a rigid quick change lathe tool post mounted to the spindle cartridge of the PCNC 1100 and CNC lathe software, allows the PCNC 1100 to control lathe operations in X and Z axes.

Normal CNC lathe operations, including turning, cut off, boring, drilling, threading, are enhanced by the fact that there is no need for threading gear changes or radius or taper attachments. It is simple to turn any taper, radius, or curve that is drawn.

Because it was mounted in the table, Eiserman decided to do a Y-offset in the Duality Lathe software. He used these Y-offsets to compensate for tool posts, but they were not staying put, so he cranked them all the way down and associated a Y-offset with each tool number. Then he reinstalled the clamp fixture around the spindle nose. He is still using this design for his spinal implant devices.

“It’s so much more stable and is rock solid. I can put tools that need a heavy cut much closer to the column, so I can get less vibration on it,” Eiserman said.

With six up-and-down working stations and eight end working stations, Eiserman uses his tooling collar gang plate to run production work on the Duality Lathe. “It’s certainly made life a lot easier. I can park a couple of tools on there without any required tool changes,” he said. “I also put an enclosure around the mill now, so I can splash the coolant better. I don’t open anything now; I start the cycle and it just goes.”

With the first round of approvals from the FDA last fall, Eisertech spinal product sales have been steadily growing in the United States. “We’re just getting started,” Eiserman said. “I put the first product up for sale in November and it’s very much a relationship and word-of-mouth business. It’s slowly, but surely, picking up and it’s getting a nice positive reception.”