Ultrasonic Welding. Welding with ultrasonic vibrations is a cost-effective and safe method for joining the two halves of a polystyrene microfluidic test chip in such a way that the function is assured. The cross-section in the test channel has to remain constant at all times in order to achieve the required capillary effect. An energy director only 0.1 mm in height on the part allows dimensionally precise joining without expulsion of melt.

The innovative test chip from Greiner Bio-One GmbH called Genspeed is used to detect MRSA (methicillin-resistant Staphylococcus aureus) infections; one of the world’s most frequently identified hospital pathogens. Due to their resistance to antibiotics, these infections represent a latent hazard for patients and serious challenges for health care facilities. This test chip which apart from identifying the specific bacteria can also detect the most important resistance genes, mecA and mecC, is made up of two parts: The microfluidic upper part of polystyrene (PS) and a PS film as bottom component. On the film, specific capture molecules are deposited using the capillary pressure method – it is then welded ultrasonically to the microfluidic upper part. The capture molecules are synthetic DNA sequences which represent the counterpart to the above-mentioned diagnostically relevant genes in the test solution. During the test method, reaction fluids are added sequentially to the microfluidic test chip. That is a challenge for the joining technique, because first the bonded parts have to be absolutely leak-tight; secondly, a perfect visual appearance is indispensable in medical technology and crucial for the subsequent opto-electronic test evaluation, and thirdly and of elementary importance is the dimensionally perfect fit, as otherwise the flow behavior inside the reaction channel necessary for the sensitivity of the Genspeed test is impaired. 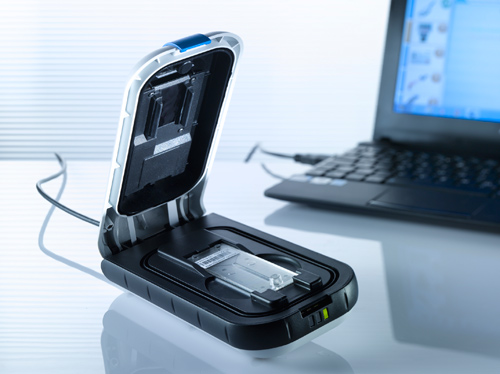 In order to ensure the transport of the liquid via the microfluidic channel into the “waste reservoir”, the collecting vessel for the reaction fluids, by capillary action, the cross-section of the reaction channel has to be reproducibly identical. Only a sensitive joining method such as ultrasonic welding with exact parameterization can satisfy this demand. The parts are very delicate with a thickness of 1.5 mm for the upper part and 0.15 mm for the film. The upper and lower parts are joined by welding a 0.1 mm high energy director along the microfluidic structure. A reaction channel measuring 30 x 2 x 0.1 mm is created in which the individual test steps are performed by capillary action. A further energy director runs around the outer contour of the upper part to fix the complete film. In the waste reservoir there are four small spacer domes which ensure that the film is positioned flat under the waste area. During the application test series it was also discovered that the gentle ultrasonic vibrations did not affect the capture molecules. 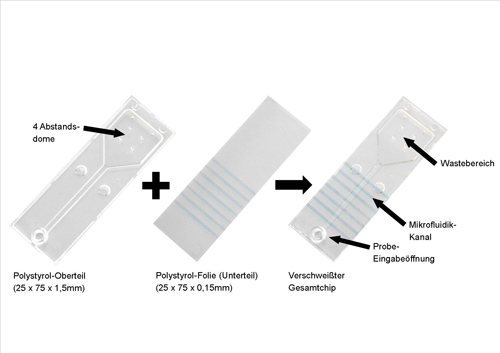 One advantage of the ultrasonic technique is the targeted energy input which permits controlled and dimensionally stable melting. Thanks to the special joint design, the ultrasonic waves are focused onto the joint zone without exerting a thermal burden on the part. The joint design for injection molded parts consists ofappropriate welding geometries with peaks or edges in the joint zone – these “energy directors” define where the melting begins. During the course of the process optimization, the welding tool or “sonotrode” surface is partially
milled away outside the seam geometries; this improves the focus of the ultrasonic waves, prevents coupling at the surface and results in a lower mechanical impact for the film.

“Weld Depth” as Ultrasonics off-Criterion for the Weld Process

The welding process can be defined and optimized using a variety of weld modes. This is expedient, as materials react differently and part forms can be more demanding. For the Genspeed test chip, a miniature part, the melt distance measured from a “reference zero point” is defined as a fixed shutdown parameter, i.e. the ultrasonic vibrations are switched off when the programmed weld depth is reached.

By zeroing the reference point, the exact point at which the weld process is to start is calculated individually for each new welding. The weld depth is then always the same and the melt volume remains constant. With a 0.1 mm high energy director, the weld depth is less than 0.1 mm. This determines the energy and time required for each weld process. The machine control displays the weld process as a graph. After analysis of the graph, the process is further optimized by defining tight process windows with minimum and maximum values. The curve of the joining velocity, in particular, is important; it is a unique “fingerprint” and should ideally have a constant linear gradient, because under normal circumstances a constant joining velocity guarantees a stable weld process with reproducible weld strength. 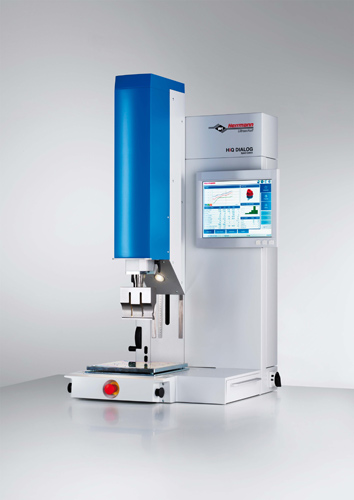 Important for Greiner Bio-One for the production of the test chips are the software validations for the welding process demanded by the regulatory requirements in the in vitro diagnostics sector which the HiQ DIALOG ultrasonic welding machine offers. The requirement is that all production steps are protected by passwords; that authorization packages and logbooks are created and that extensive software audit possibilities are available. The new FDA Software Component (FSC) from Herrmann Ultrasonics offers extensive user authentication and monitoring of the authorizations. All parameter changes and user actions are recorded in electronic audit trails. If a parameter is changed, the previous values can be called up again at any time. This type of traceability of production steps has already been important in certain branches for many years, such as in the pharmaceuticals and food industries. The FSC software satisfies the demands of the FDA (Food and Drug Administration) Directive CFR 21 Part 11.