These roll-to-roll additive manufacturing techniques offer MEMS-like capability, but have the advantages of lower cost, faster time to market, and higher customization than wafer-based processes. These techniques can fabricate small footprint, high-copper density coils with integrated resonant tuning capacitors, along with temperature and strain/force sensors.

Device companies commonly install memory chips in a disposable or semi-reusable attachment within a product assembly. Attachment examples include single-use medical diagnostic sensors, disposable printer ink cartridges and tooling inserts. The memory chip provides information about the attachment to a hosting device that controls or operates the attachment. This stored information may include the attachment’s number of connections or uses, calibration coefficients and the manufacturer or patient identification and date. This attachment data can then be used to enforce product requirements regarding reliability, accuracy, safety and brand. For example, the host device can alarm the user, shutdown, or prevent attachment operation when the memory data is outside the product’s validated or tested limits.

The traditional one-Wire communication protocol is a host architecture for reading and writing information to a memory chip that’s commonly terminated with pins or sockets. These electrical contact terminations wear out with repeated insertions, are prone to environmental contamination and require precise positioning within a mating connector assembly. A wireless radio frequency identification (RFID) communication protocol solves these kinds of wired connection problems, but may introduce different design issues. If multiple memory chips are within the host’s detection range, the host may not be able to correctly identify the connected attachment. Additionally, increasing the separation distance between the host transmitting antenna and attachment receiving antenna may cause the antenna dimensions and transmitting power to become prohibitively large.

This article describes a mechanically and electrically robust wireless connection that prevents misidentification of a connected device attachment, while minimizing both transmitting and receiving antenna size. The miniature antenna size and close separation distance allow inconspicuous placement within a device’s attachment directly at the interface.  Both antennas can be molded or encapsulated within plastic or other non-magnetic materials to create a non-contact hermetically sealed electrical connector interface. The limited broadcasting and listening range of the coupled inductor antennas minimizes RF power emission while maximizing communication security. 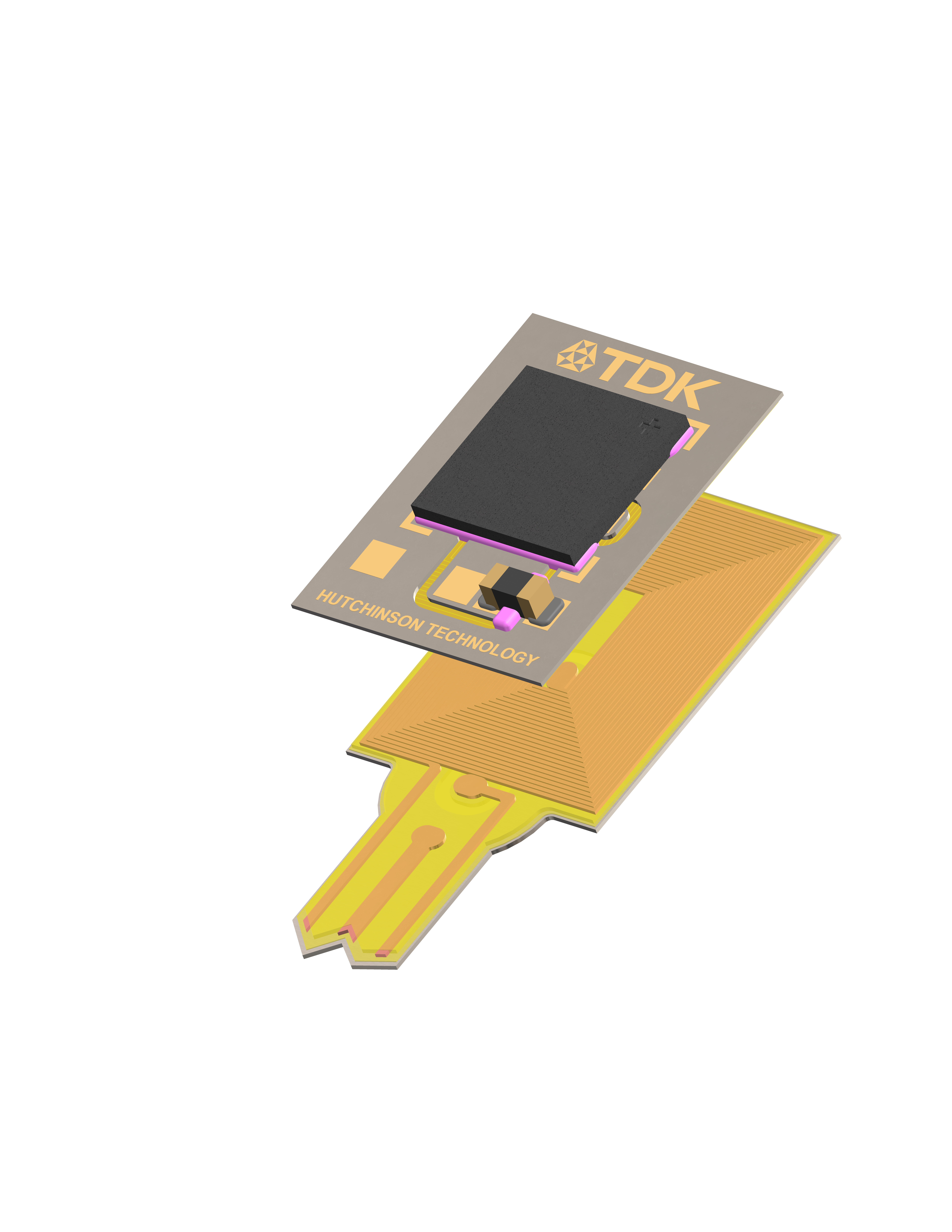 Figure One depicts the optimized components used for wireless secure authentications. The antennas are custom planar coil circuits that are 110 microns thick, constructed on a 50-micron stainless steel (SST) base. The transmit coil’s SST base, spanning the entire flexible circuit from coil spiral to the electrical interface pads (not shown), can be grounded to limit electrical field emissions. Copper traces, at least 40-micron tall, wide, and having a 50-micron center-to-center spacing, are spiraled for at least 20 turns within a rectangular area of 3 x 4 mm. Polyimide layers, about 10 micron thick, separate copper from the SST base and surrounding environment. The inductance of both antennas measured at 13.56 MHz is about 1 µH.

Both antennas (inductor coils) are closely coupled such that the magnetic field created from alternating current (AC) in the transmit coil induces an alternating voltage in the nearby receive coil. The induced voltage provides power to the memory chip that is directly mounted to the receive antenna. Within the memory chip is an internal switching circuit that modulates the chip’s impedance load at a sub-carrier frequency. This repeated on and off load switching creates variable current flow through the receiving antenna resulting in a radiated voltage signal traveling back through the transmit antenna to the host RF electronics. Both the carrier and sub-carrier frequencies are amplitude modulated in order to produce digitized communication between the host and memory chip.

The receiving antenna is mounted directly to a memory chip that has embedded encryption, a 256-bit secure hash algorithm that further enhances secure authentication and communication integrity. The chip’s generated sub-carrier frequency is 423.75 KHz.

Resonant tuning capacitors, 150 pF and 240 pF, were mounted in parallel and across the respective transmit and receive coil circuits to maximize peak voltage and power the memory chip. 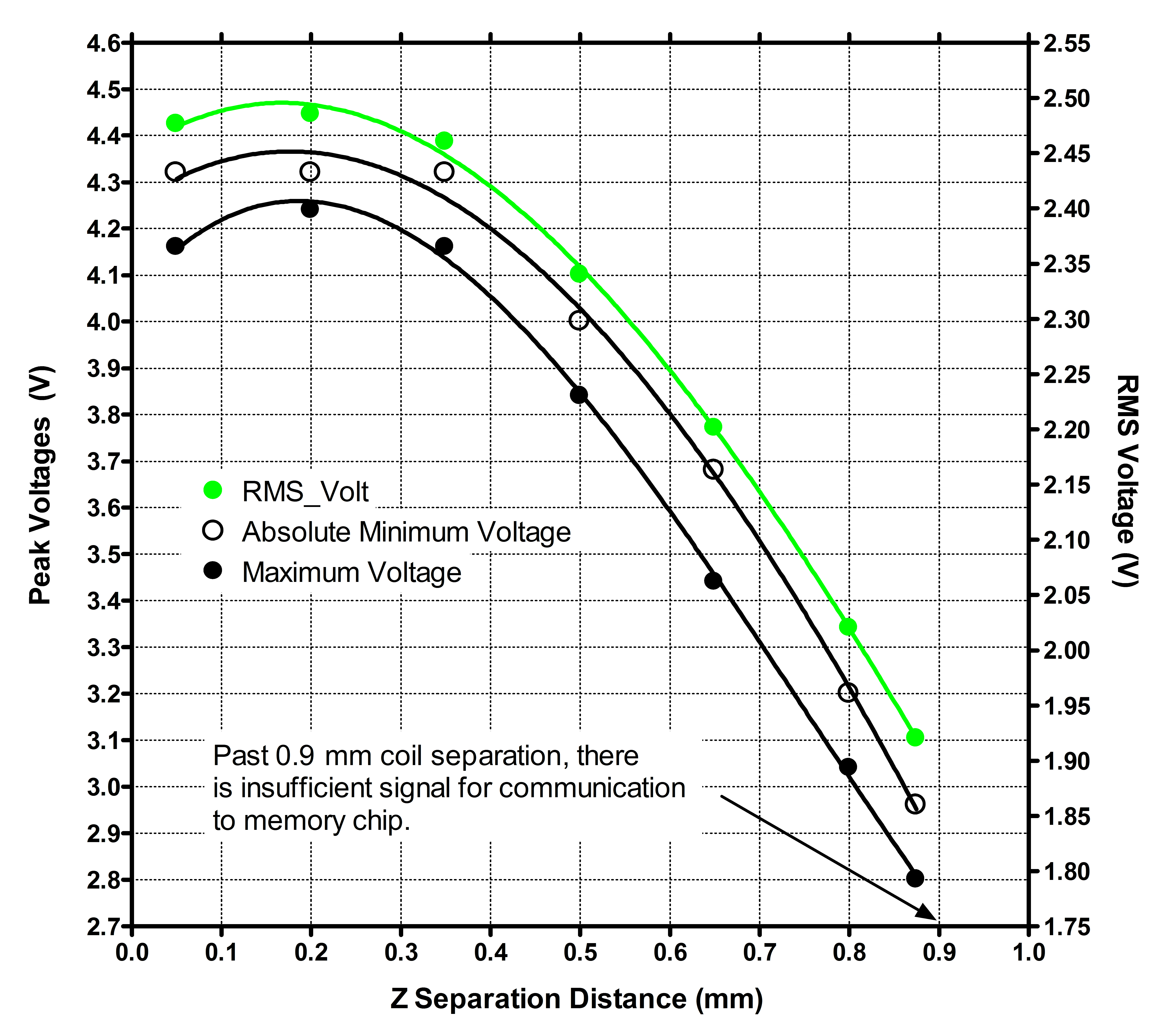 An experimental study was performed to determine how separation distance and lateral alignment between the inductor coils influences communication performance. The positional tolerance results are useful for designing the connector components that would house and mate both coils.

To vary antenna separation distance, a controllable Z-axis stage micrometer was affixed to the top surface of a 3 x 4 mm area memory chip that was soldered, then glued to a receiving coil having a side mounted resonant tuning capacitor. For antenna alignment changes, a controlled XY-axis micrometer stage was attached to the transmit coil bottom SST surface. Operating software was used to test both read and write functions with the memory chip at each coordinate position. The separation distance studied ranged 0.05 to 0.90 mm with both coils nearly concentric, having no obvious misalignment. At 0.20, 0.50, 0.65 and 0.80 mm separation distances, the XY positions that delineate successful and failed communication function were mapped.

The coordinates are mapped for successful read and write function of the EEPROM coil assembly at various coil separation distances. At the optimal signal center, left shifted from dimension center, the transmit coil can be ± 0.5 mm misaligned from the receive coil. The receive coil’s SST bus bar, located across the spiral path, may have changed the magnetic field center. (Image Credit: TDK)

When both antenna coils are concentrically aligned at the spiral’s dimensional center, communication fails at approximately a 0.9 mm separation distance, Figure Two. At a practical 0.65 mm separation distance, the XY positional tolerance is ± 0.5 mm from a signal center that is left shifted along the long turn 4 mm length dimension, Figure Three. The shift between dimension and signal center may be from the SST layer bus bar that it connects, by way of plated vias, the inside copper spiral to the outside connection pad.