“The growth in both the number and complexity of deployed sensors that collect huge amounts of data that need to be turned rapidly into actionable information is overwhelming the capability of current military computing platforms,” said Rod Rice, General Manager, Military/Aerospace Products, GE Intelligent Platforms. “The requirement exists to substantially increase the throughput of these data.”

With its wide operating temperature range and resistance to shock and vibration, the module enables the deployment of intelligence, surveillance and reconnaissance (ISR) capabilities across a range of manned and un-manned airborne, ground and naval platforms in harsh environments. It can provide a significant boost to the performance of radar and sonar systems as well as image-, signal- and data processing applications. 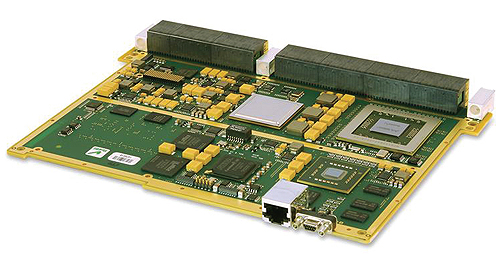 The module provides high speed data connectivity to GE’s MOSA (Modular Open Systems Architecture) board level sets that include the latest RDMA-enabled Intel® Core™i7 single board computers, multiprocessors, NVIDIA® CUDA™ GPUs and PMC/XMC carrier cards. Applications can be moved from Linux® server or desk-top machines onto these deployable modules for increased computing performance where it is needed most.