Lasers are being used in cutting, drilling, welding, marking, or structuring applications in many industrial sectors to optimize manufacturing processes and satisfy the need for an increasing the quality of components (Figure 1). This is especially true for the electronics and semiconductor industry, where requirements on accuracy and speed are higher than in most other applications. Gains in productivity and quality in manufacturing processes involving lasers come from high-performance positioning systems, motion controllers, and software, along with higher speed communication and synchronization between motion platforms, laser controllers, and beam steering units. 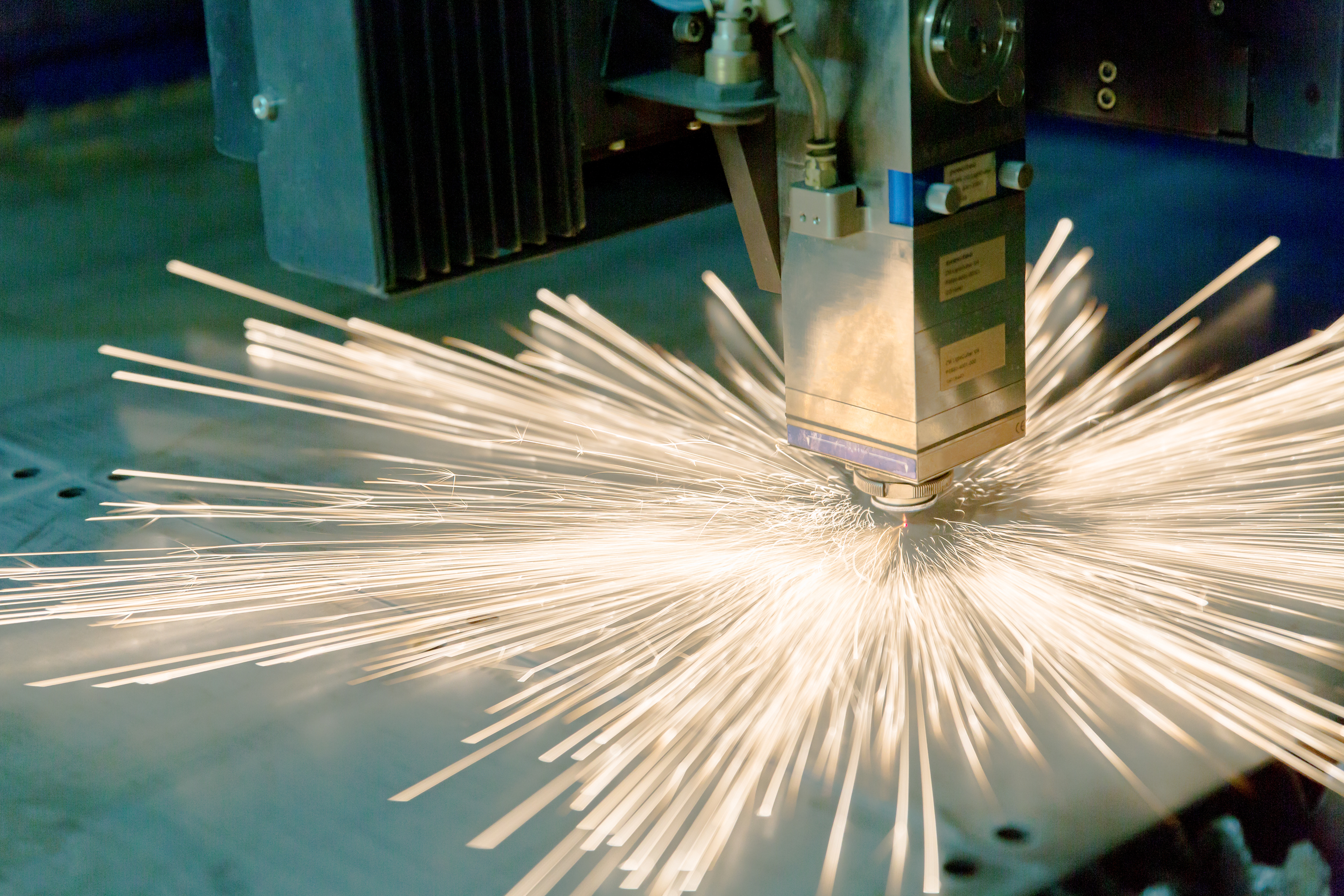 Figure 1: Lasers are used in many industrial sectors to optimize manufacturing process and ensure the high quality of components. (Image Source: PI)

Diamonds are often laser engraved with a code or serial number (Figure 2) to certify their authenticity. Here, a multi-axis, high-dynamics positioning system moves the workpiece in the X and Y direction while the laser fires away. Positioning of the laser objective in the vertical direction is achieved with another high-dynamics linear stage. Three-phase linear motors and voice-coil drives (for shorter travel ranges up to 1 in.) combine high accelerations and velocities with virtually unlimited service life due to their non-contacting delivery of force. For short travel ranges, scanning frequencies in 10 Hz range are feasible. 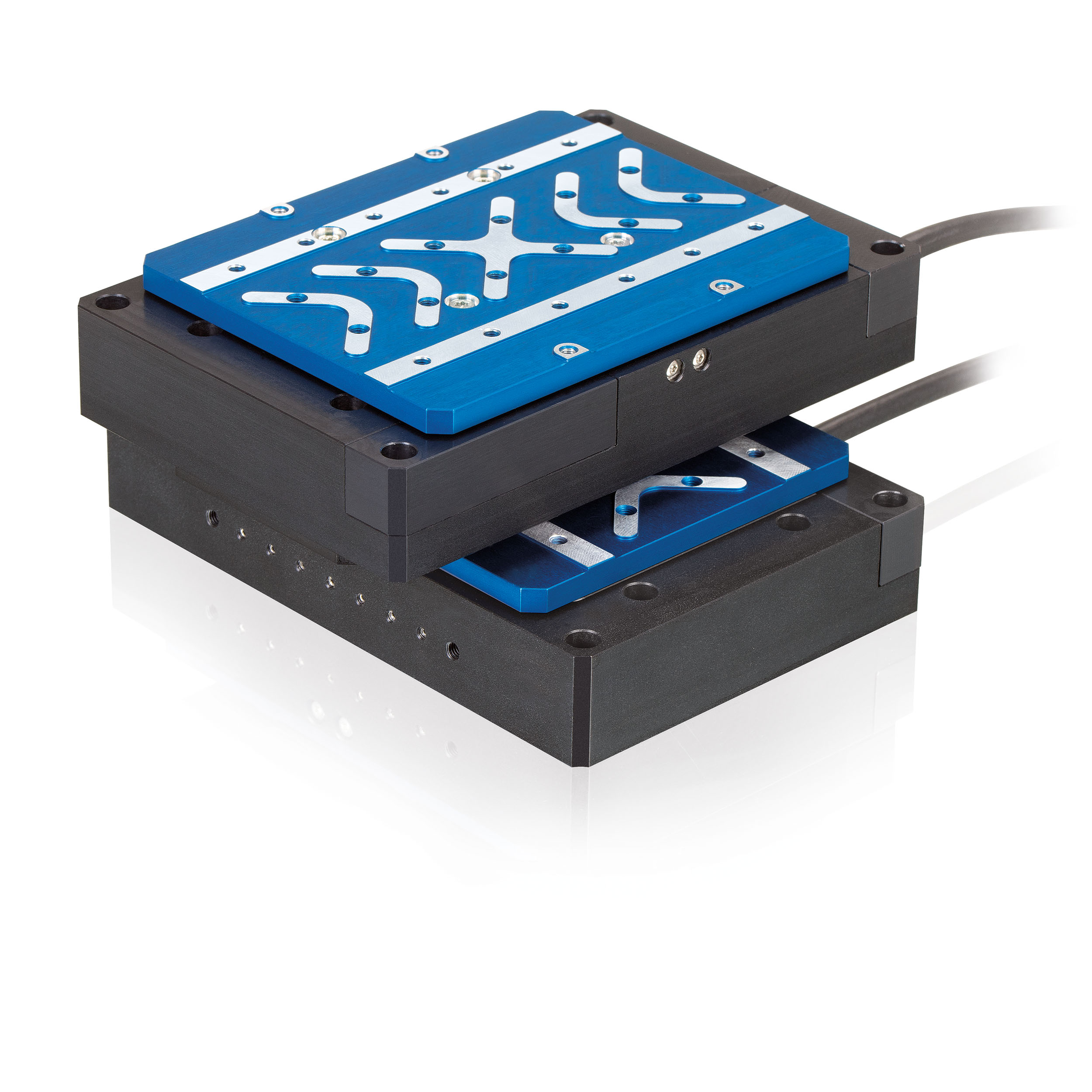 Figure 2: Linear stages with highly-dynamic electromagnetic direct drives are used to scan and position diamonds in the X/Y plane to laser-engrave a code certifying their authenticity. (Image Source: PI)

Guiding precision in the sub-micron range is ensured by crossed roller bearings and direct-measuring. Integrated linear encoders provide the required position resolution and repeatability (the best linear encoders currently available can resolve motion to below one nanometer). An advanced motion controller triggers the laser, dependent on both position and speed―matching the positioning system and laser exactly to each other when running complex patterns, circles, or sharp edges. An optimized algorithm in the controller synchronizes the motion of the workpiece with the laser pulses, so that the shape, size, and gap between adjacent points remain constant.

Dicing semiconductor wafers also demands a highly precise motion system. The cutting width must remain constant, and deviations along the programmed path must be limited to a few micrometers per meter to avoid damage of individual dies during the cutting process. An air bearing planar stage, is a suitable positioning system for such applications (Figure 3).

Air bearings replace mechanical contact with an air film, eliminating friction, particle generation, and wear. The A-322 stage is driven by sine-commutated, three-phase linear motors providing accelerations of 20 m/s². The lack of friction allows for better geometric performance and motion with high-speed constancy. Ironless linear motors are non-cogging, providing smoother motion and higher resolution to one nanometer and below. The combination of air bearings, linear encoders, and ironless linear motors maximizes the throughput while ensuring the highest precision. 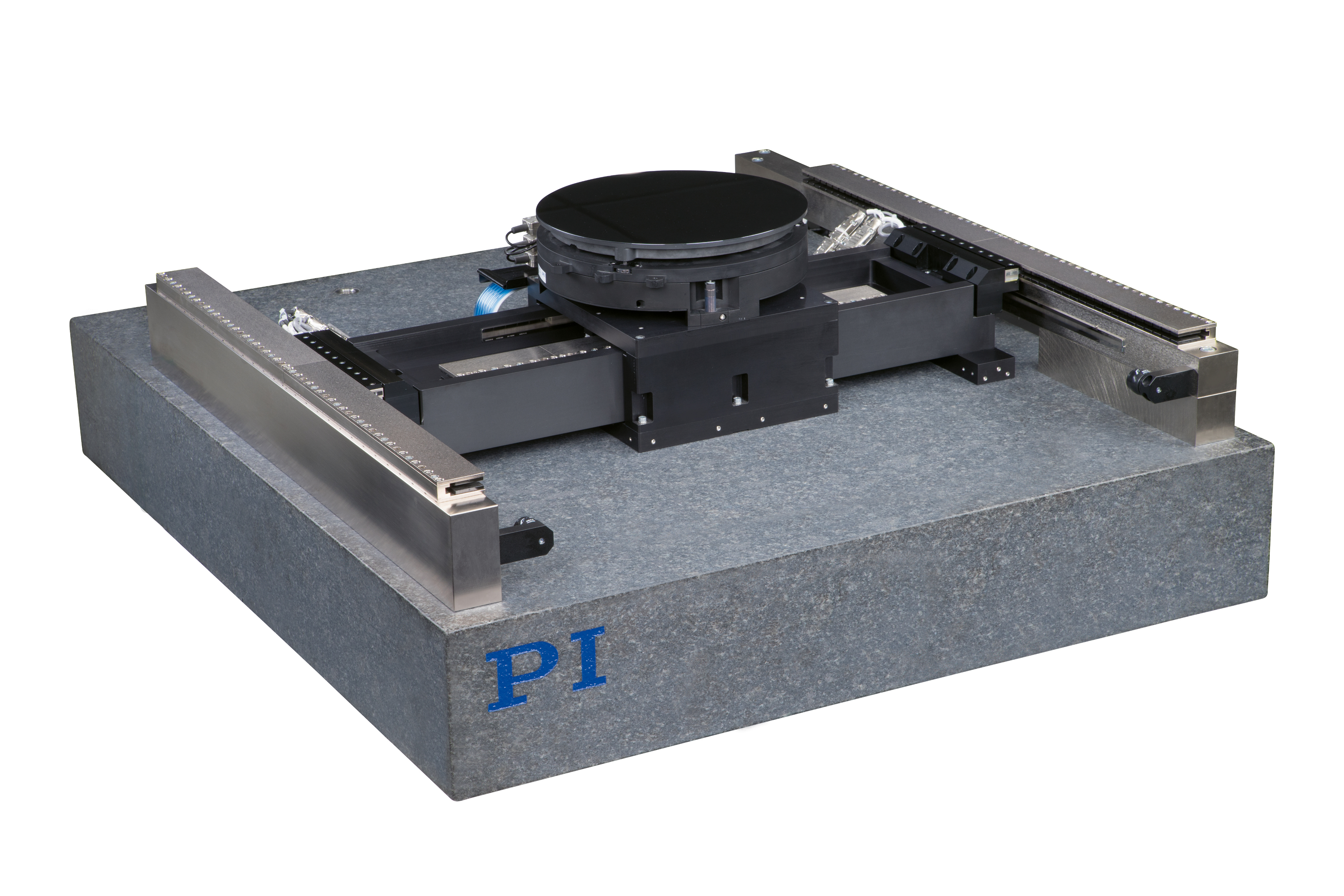 Figure 3: Wafer dicing requires high accuracy. The permissible tolerances along the travel range amount to only a few micrometers per meter. An air bearing planar stage, driven by linear motors, is a suitable positioning system for such applications. (Image Source: PI)

The requirements for production and processing of stencils and printed circuit boards are similar. Workpieces and structural density are particularly large, demanding motion and positioning systems with longer travel ranges while still maintaining micrometer precision.

Gantry motion systems (Figure 4), with their high stiffness but relatively low-inertia motion platforms, are the best approach―here the part to be processed is stationary while the laser head and the optics are moving. Cable management and operation are optimized so that vertical motion axes, autofocus sensors, and the laser feed can be integrated. The absolute-position measuring system renders the typical initialization/homing process unnecessary, just another step towards higher efficiency. 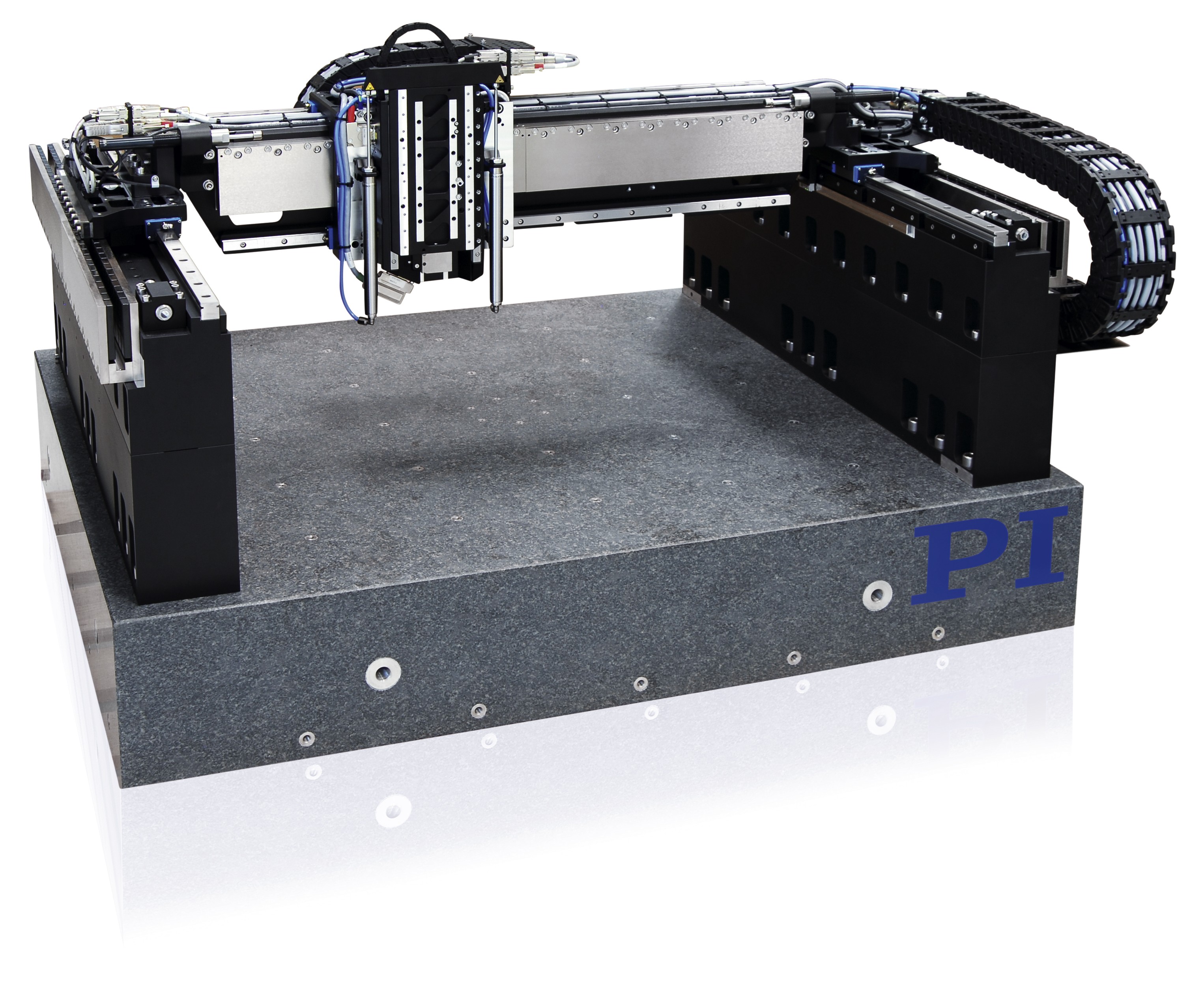 Galvanometer scanner heads can be combined with multi-axis positioning systems. A galvanometer is a high-dynamics moving-coil motor. In modern galvo scanners, a low-inertia mirror is driven in closed loop to position a laser beam with high speed, precision, and repeatability. The combination of two galvo scanners inside one system allows for steering the laser beam in two dimensions. Typical scan angles are in the range of +/- 20 degrees. This produces good results with respect to dynamics and precision when, for example, dials are to be written onto functional components. Motion in the XY direction can be extended by a linear-motor-driven, cross-roller XY positioning stage.

Equipped with optical linear encoders the stage achieves minimum incremental motionas low as 0.02 μm and repeatability of 0.1 μm. The stage can handle loads of 50 lb. (Figure 5). 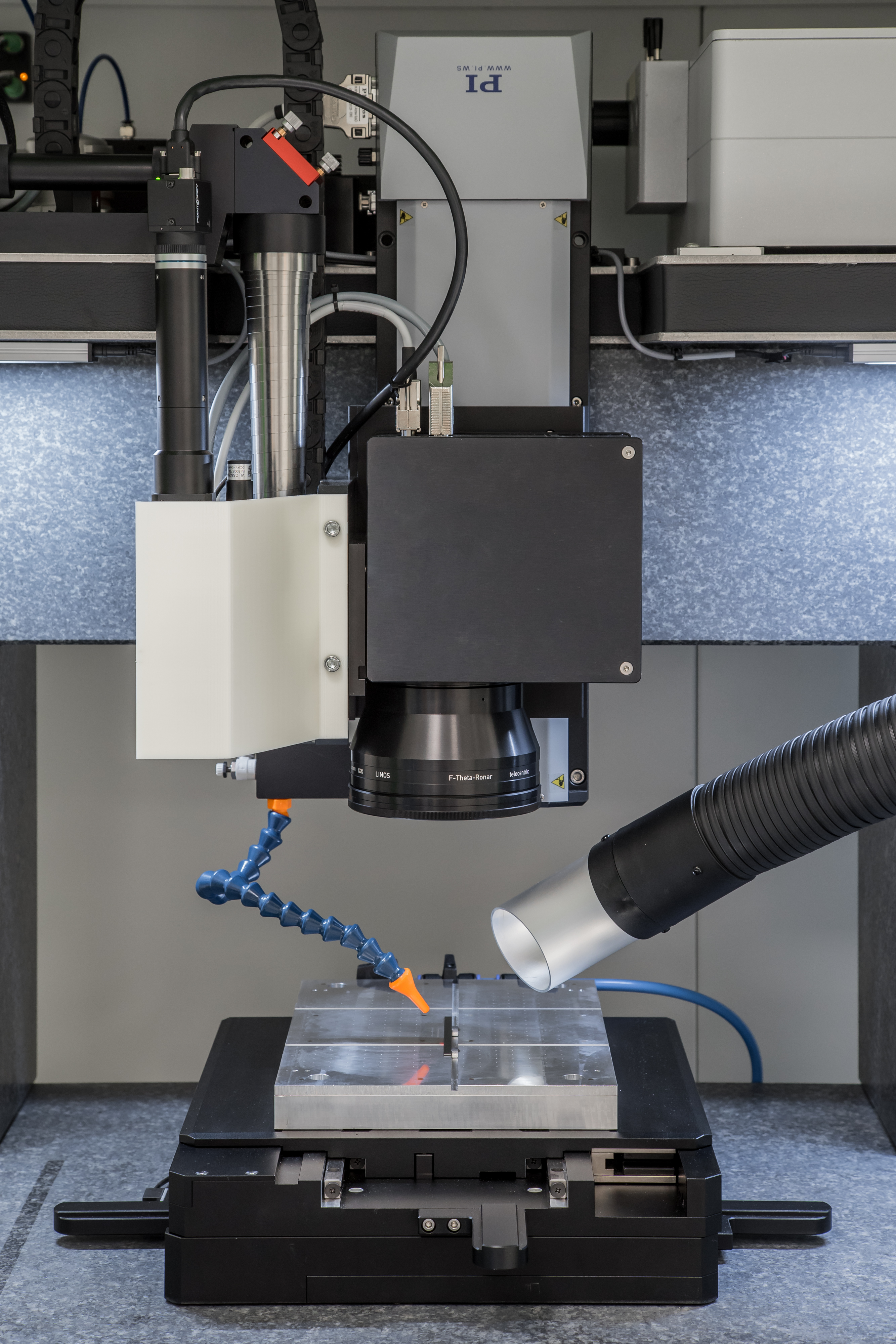 Tying motion and laser source together used to be complex, but a special Ethernet for Control Automation Technology (EtherCat)-capable laser control module now allows direct control of the laser source, increasing both precision and throughput.

EtherCAT is an open, real-time Ethernet-based fieldbus system used by control and system engineers as a robust, high-speed, real-time network for machine control solutions. The flexibility of the fieldbus system, and the precise synchronization of all network devices, has helped EtherCAT to gain popularity on a global scale. In high-performance applications, exact synchronization is a critical factor.

The LCM module controls virtually any laser via universal electrical interfaces. In addition to the high-speed laser signal output, the module is also equipped with a special lock system, an error input, and an enable output. The challenges during development of a robust and scalable laser processing or micro-manufacturing machine platform can be solved faster with this type of laser module.

Scanning for Large Areas and Workpieces

Basically, laser marking functions in a similar way to human writing. The arm, as a slow musculoskeletal system, provides gross manual dexterity while the hand and fingers accurately form the individual letters. This corresponds to the motion of the galvanometer scanner. Analogous to this, the motion patterns from the X/Y stage and scanner are synchronized by a controller and run simultaneously during scanning. This process allows efficient marking of large areas with many small details, and therefore, increases the throughput.