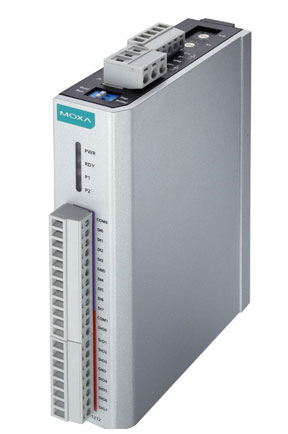 Five different ioLogik R1200 models are available with different analog and digital input/output configurations for interfacing to field sensors, such as proximity and mechanical switches, push buttons, limit switches, optical sensors, and light switches, as well as to drive output relays for devices like LEDs, alarms, and actuators.

Thanks to time-saving features like ioSearch you can easily configure and manage multiple R1200 devices over a two-wire RS-485 daisy-chain bus and reduce time spent on the initial setup, maintenance, and troubleshooting of the entire system, said Richard Duong, Business Development Manager for Moxa Data Acquisition and Control.

The ioLogik R1200 Series has a great time-saving feature for setting up multiple units with the exact same configuration, explains Duong: Typically, RS-485 I/O modules require a physical serial connection with the correct baud rates and serial settings to a computer with a software utility to initially setup a unit. Moxa is the first in the industry to offer plug and play setup via a USB thumb drive. Just plug a thumb drive preloaded with your configuration into the unit, power cycle, and your setup configuration is loaded automatically to the device — it’s that simple. This feature will be a huge time-saver in production environments.

Features like independent dual RS-485 ports let users to connect to the unit with two separate sets of serial wiring. This allows the addition of a redundant RS485 bus system to a single SCADA computer for dual bus redundancy or to setup a system to two separate SCADA computers for dual controller redundancy. The dual serial ports can also be configured into a repeater mode which does away with the traditional limitations of RS485 serial bus length, allowing the running of multiple R1200 units spaced at the maximum RS485 two wire distance limit between each pair of units.