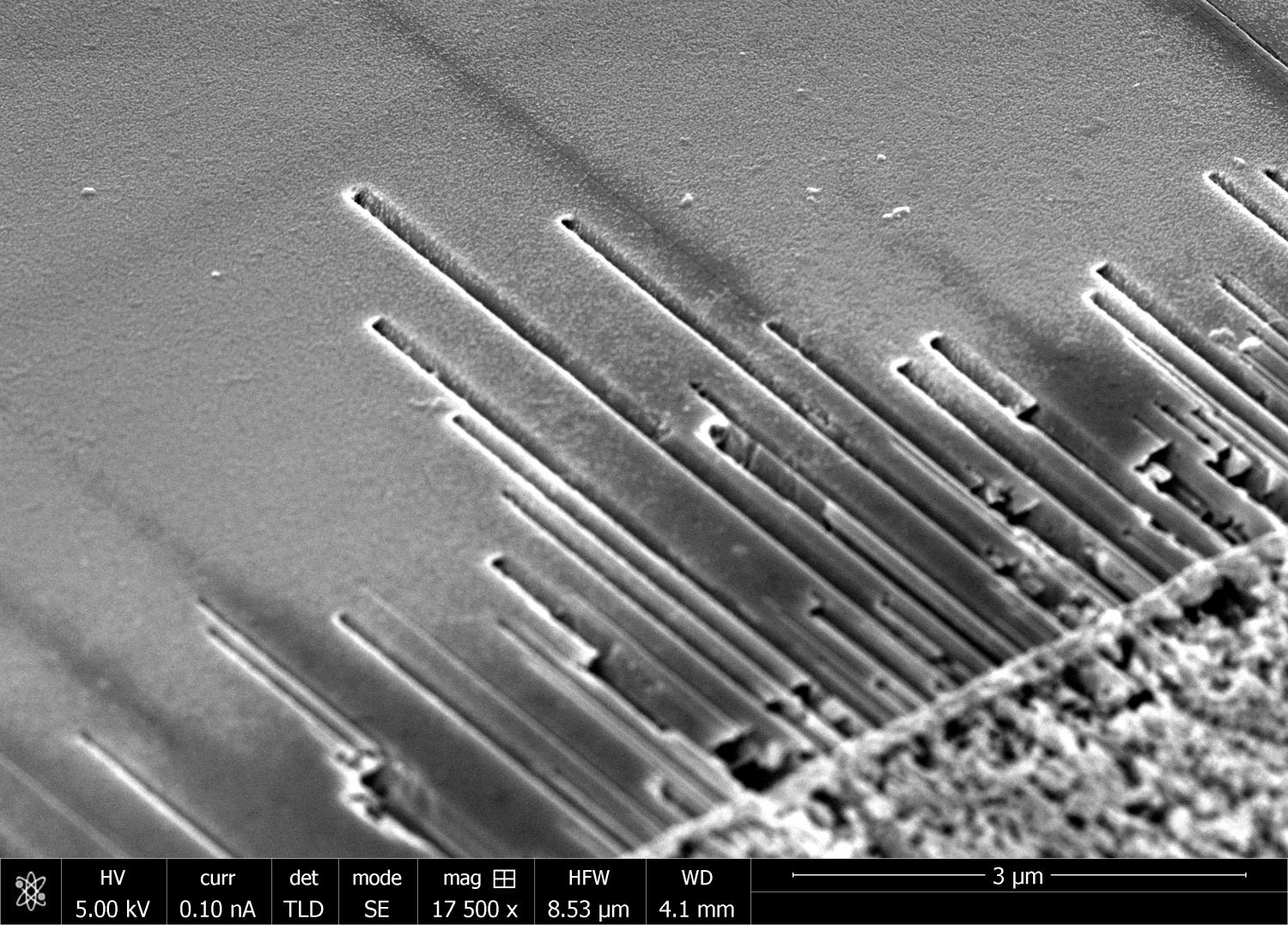 Electron micrograph of surface-directed nanochannels formed on the surface of the semiconductor indium phosphide. Nanochannels are formed using a gold-catalyzed vapor-liquid-solid etch process and their locations are defined by the deposited gold pattern. (Credit: NIST/Nikoobakht)

In the nanoworld, tiny particles of gold can operate like snow blowers, churning through surface layers of an important class of semiconductors to dig unerringly straight paths. The surprising trenching capability, reported by scientists from the National Institute of Standards and Technology (NIST) and IBM, is an important addition to the toolkit of nature-supplied ‘self-assembly’ methods that researchers aim to harness for making useful devices.

“We were disappointed, at first,” says NIST research chemist Babak Nikoobakht. “Then we figured out that water was the contaminant in the process—a problem that turned out to be a good thing.”

That’s because, as determined in subsequent experiments, the addition of water vapor served to transform gold nanoparticles into channel diggers, rather than the expected wire makers. Beginning with studies on the semiconductor indium phosphide, the team teased out the chemical mechanisms and necessary conditions underpinning the surface-etching process.

First, they patterned the surface of the semiconductor by selectively coating it with a gold layer only a few nanometers thick. Upon heating, the film breaks up into tiny particles that become droplets. The underlying indium phosphide dissolves into the gold nanoparticles above, creating a gold alloy. Then, heated water vapor is introduced into the system. At temperatures below 300 degrees Celsius (572 degrees Fahrenheit), the tiny gold-alloy particles, now swathed with water molecules, etch nanoscale pits into the indium phosphide.

But at 440 degrees Celsius (824 degrees Fahrenheit) and above, long V-shaped nanochannels formed. The channels followed straight paths dictated by the regularly repeating lattice of atoms in the crystalline semiconductor. During the process, indium and phosphorous atoms interact with oxygen atoms in the water molecules on the surface of the gold alloy droplet. The oxidized indium and phosphorous evaporate, and the droplet advances, picking up more semiconductor atoms to oxidize as it goes.

The result is a series of crystalline groves. The dimensions of the grooves correspond to the size of droplet, which can be controlled.

In effect, the droplet is the chemical equivalent of the auger on a snow blower that, instead of snow, burrows through the top portion of the semiconductor and ejects evaporated bits, Nikoobakht explains.

The team observed the same phenomena in gallium phosphide and indium arsenide, two more examples of semiconductors formed by combining elements from the third and fifth columns of the periodic table. Compound semiconductors in this class are used to make LEDs, and for communications, high-speed electronics and many other applications. Nikoobakht believes that, with adjustments, the etching process might also work for creating patterns of channels on silicon and other materials.

Controllable, fast and flexible, the “bottom up” channel-fabrication process shows promise for use on industrial scales, the researchers suggest. In their article, the teams describe how they used the process to etch patterns of hollow channels like those used to direct the flow of liquids, such as a blood sample, in a microfluidic device, or lab on a chip.