On Tuesday, May 29, 2018, the National Hurricane Center issued the last public advisory on Alberto. NASA and NOAA satellites continued to provide imagery that showed the extent and strength of the storm in the southern U.S. Alberto has weakened to a subtropical depression. The Moderate Resolution Imaging Spectroradiometer (MODIS) instrument aboard NASA’s Aqua satellite captured an infrared image of Subtropical Depression Alberto on May 29 at 4:15 a.m. EDT (0815 UTC) showed strongest storms in three areas circling Alberto’s low-level center. The most powerful thunderstorms had cloud top temperatures as cold as or colder than minus 63 degrees Fahrenheit (minus 53 degrees Celsius). Storms with cloud top temperatures that cold have the capability to produce heavy rainfall. That heavy rainfall is a concern and is part of the warning from the National Hurricane Center (NHC).

NHC forecasters said that Alberto is expected to produce 2 to 6 inches of rain from Alabama northward into the southern Great Lakes and from north Florida into the southern Appalachians through Thursday. Isolated maximum storm totals of 12 inches are possible over the Florida Panhandle and Alabama. These rains may produce flooding and flash flooding.

NOAA’s GOES-East satellite provided an early morning visible picture of Alberto moving into the Tennessee Valley. The imagery showed that the center was over Alabama and powerful thunderstorms circled the center extending into eastern Mississippi. Western Mississippi was clear of clouds from Alberto in an image taken on May 29 at 8 a.m. EDT (1200 UTC). The bulk of Alberto’s clouds and storms stretched from the northern to eastern and southern quadrants, blanketing Alabama, Georgia, the Carolinas, Tennessee and Kentucky.

The NHC noted at 5 a.m. EDT (0900 UTC) on May 29, the center of Subtropical Depression Alberto was located near latitude 32.3 degrees north and longitude 86.8 degrees west. That’s just 30 miles (45 km) west of Montgomery, Alabama. The depression was moving toward the north-northwest near 13 mph (20 kph). Maximum sustained winds were near 30 mph (45 kph) and continued weakening is forecast as Alberto moves farther inland. The estimated minimum central pressure is 995 millibars.

The National Weather Service Weather Prediction Center noted on Tuesday, May 29, 2018, “Alberto weakened to a subtropical depression on Mon. night. However, heavy rainfall from Alberto will spread into northern Georgia, the western Carolinas, and Tennessee on Tuesday, increasing the threat of flash flooding in those areas. Flash Flood Watches are in effect for a large swath of the South, and even as far north as the Ohio River Valley and central Appalachians.”

The system is expected to degenerate into a remnant low by Tuesday evening. 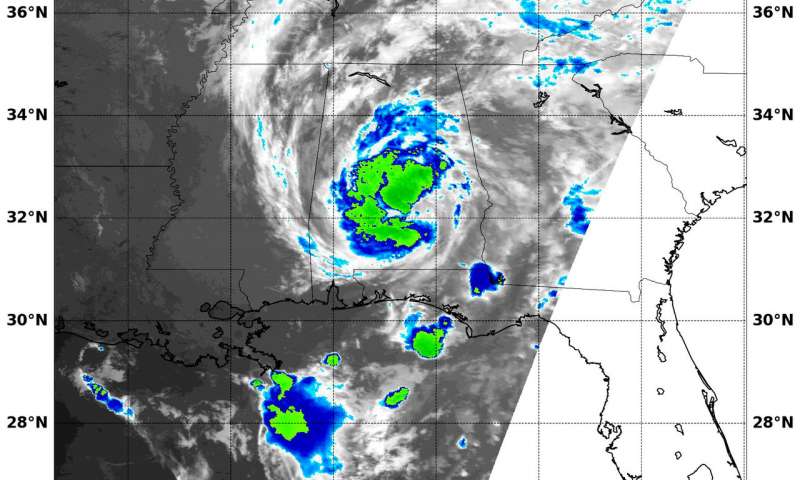