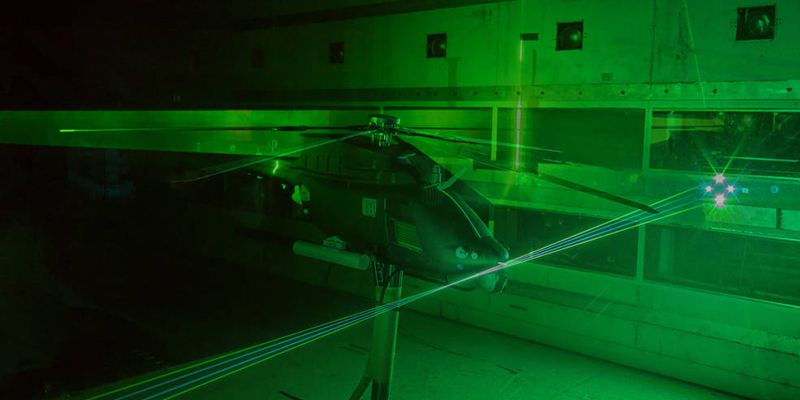 As part of a 50-year research collaboration with the U.S. Army, a 37-percent scale powered model of an advanced Army Kiowa Warrior helicopter was tested in NASA Langley’s 14- by 22-Foot Subsonic Tunnel in 2013. Credits: NASA Langley / Oliver Wong

U.S. helicopters, military and civilian, are safer and more efficient today in part because of a research partnership established 50 years ago between the U.S. Army and NASA.

The joint agreement, signed in 1965, has allowed NASA and Army researchers to work side by side, especially at three NASA aeronautics research centers – Ames at Moffett Field, California; Glenn in Cleveland, Ohio; and Langley in Hampton, Virginia – to improve rotorcraft.

In the ’60s the Army recognized it needed to do research and development to improve its fleet of rotary wing aircraft, a form of air mobility particularly useful during the Vietnam War era. So rather than spend millions of dollars to build wind tunnels, flight test and simulation capabilities – it turned to NASA, which already had many of those facilities.

“Progress in the Vertical Lift arena as applicable to Army missions has been substantial indeed during the past two decades,” wrote Norman Augustine in a 1980 report called Vertical Lift Technology Review. “The NASA/Army relationship addressing this area is probably not exceeded anywhere in the realm of interagency cooperation in terms of mutual support and efficiency. The effort to truly integrate the assets of these organizations has been highly successful; should be furthered; and has almost certainly been to the substantial benefit of both the Army and NASA.” 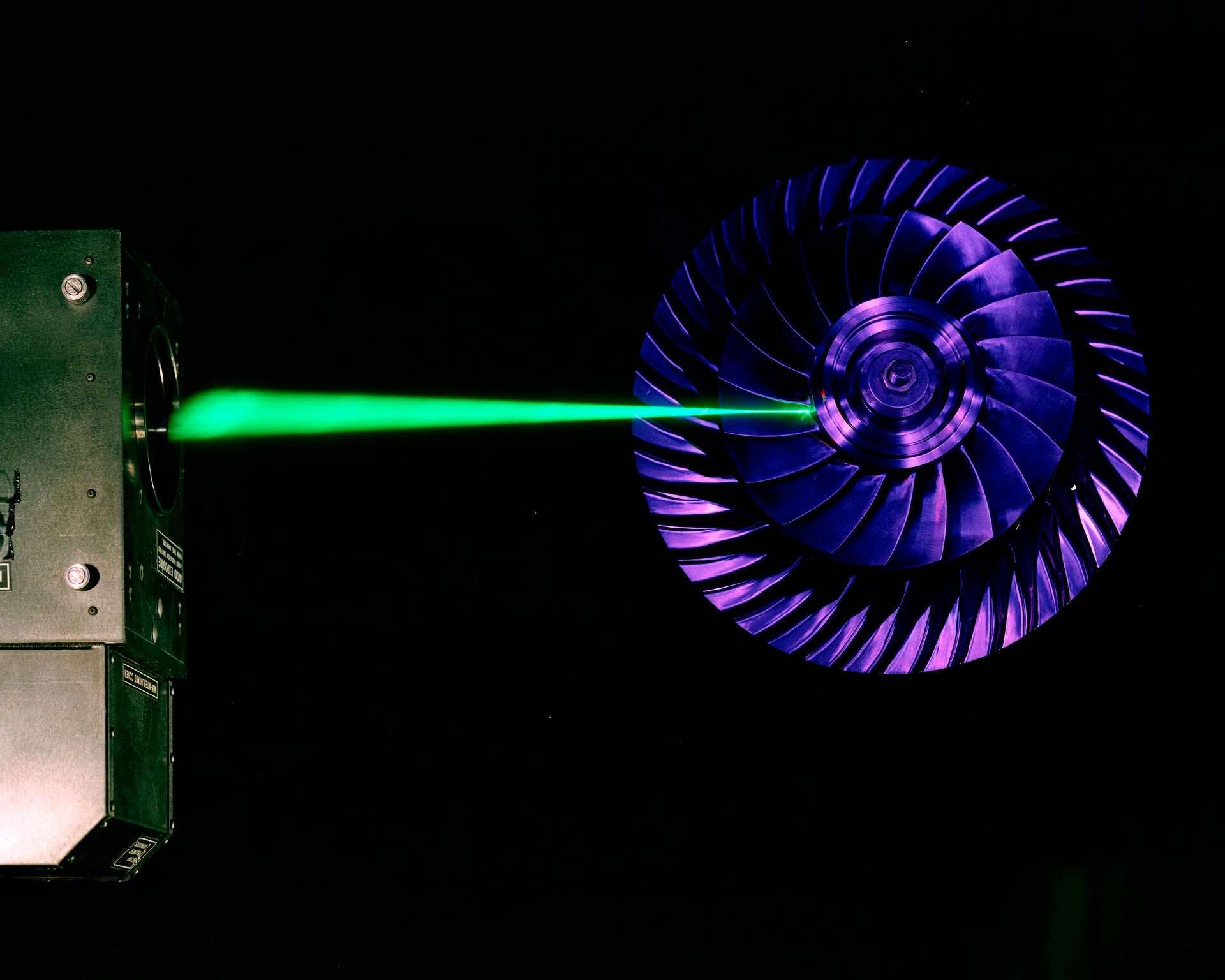 Using a laser, NASA and the Army tested the performance of an advanced centrifugal compressor to see if it improved engine fuel efficiency. Credits: NASA

The partnership has also had substantial benefits for the rotorcraft community as a whole. Civilian helicopters now include technology developed by research done to advance Army rotorcraft and vice versa.

“Improving rotary wing technology involves government agencies, industry and academia working closely together,” said Dr. William Warmbrodt, chief of aeromechanics at NASA Ames. “For the past 50 years, the nation has looked to the NASA and Army to set the goals, directions, and lead the way in both civilian and military rotorcraft technology development.”

“Regardless of end result mission application, the laws of physics remain constant.”

Full-scale crash testing at a NASA gantry has improved restraints, seats and structures. One Army/NASA test also assessed cockpit airbag systems, which are now standard on some military helicopters. 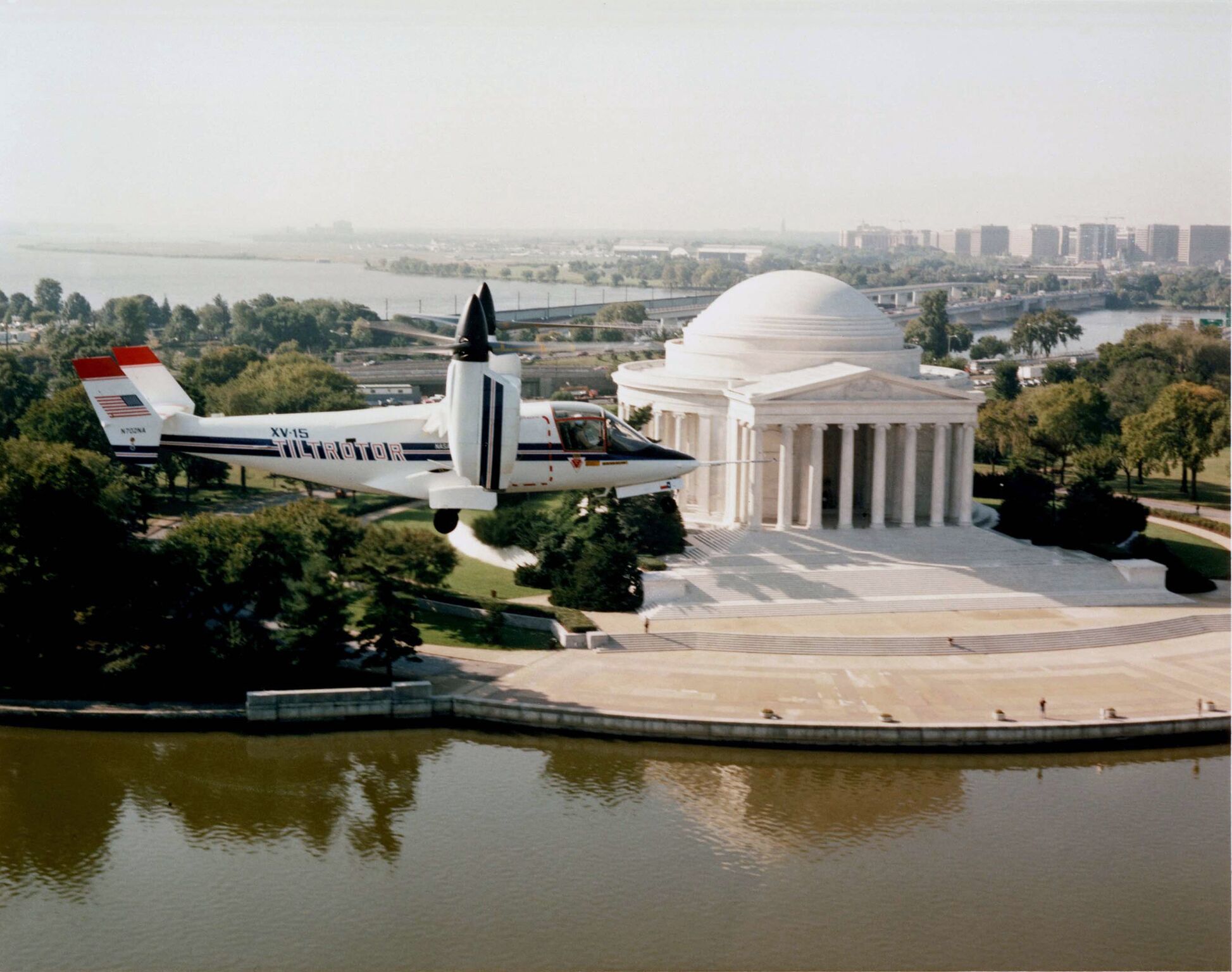 Developed and first flight tested in the 1970s by NASA and the Army, the XV-15 was one of the first successful tiltrotors. Credits: Bell Helicopter

Those systems are now installed on most military helicopters and available for civilian ones.

Research done by NASA to reduce the noise of helicopters has been incorporated into the Army’s fleet, and NASA and the Army routinely conduct joint acoustic flight test programs to find new ways to reduce helicopter noise.

According to Gorton, one of the most memorable Army/NASA collaborations was the 1970s development and flight testing of a new type of vehicle, the XV-15 Tiltrotor. The XV-15 Tiltrotor proved that it was possible to have an aircraft that could hover like a helicopter and then move the rotors to fly like an airplane.

Because of the success of the XV-15 the Marines decided to develop what is now the V-22 Osprey tiltrotor, and there are commercial tiltrotors ready to start the certification process for civilian use. A tiltrotor concept also is being evaluated by the Army as one possible configuration for the next family of vehicles called Future Vertical Lift. 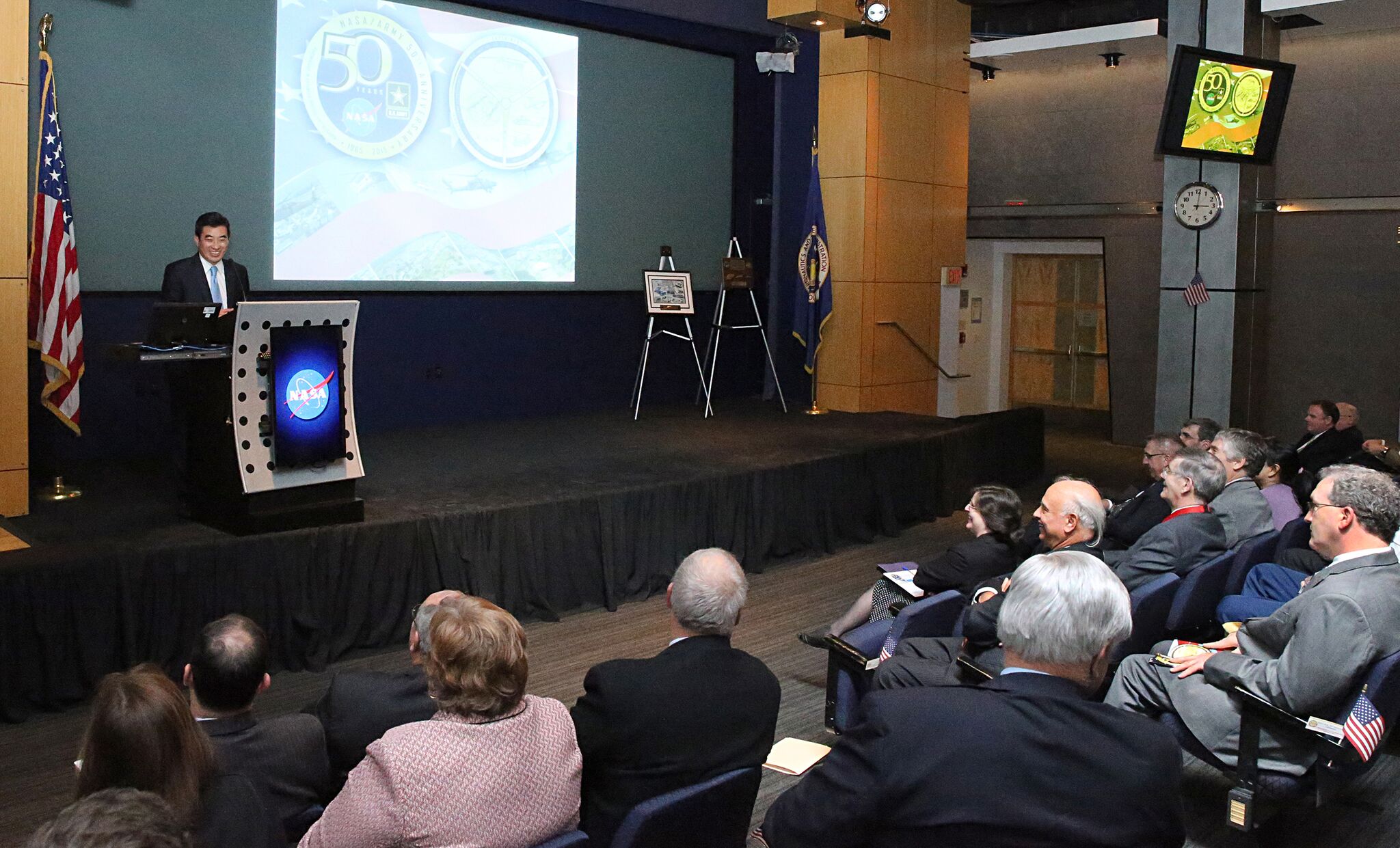 NASA Aeronautics Associate Administrator Jaiwon Shin (at podium) was among those who recognized 50 years of NASA/Army helicopter research collaboration during ceremonies at NASA Headquarters in Washington. Credits: NASA / Maria Werries

“The NASA-Army agreement provides great products and benefits to the aviation warfighter,” said Barry Lakinsmith, director of the Aeroflightdynamics Directorate, headquartered at Moffett Field, California. “By partnering, our researchers and facilities deliver far more together than individually.”

NASA and the Army continue to work together on technologies that will make helicopters and tiltrotors faster, quieter, safer and more efficient.

“The rotorcraft technology development partnership has stood the test of time for 50 years,” added Gorton. “We continue to work together to make the best use of our resources both for civil users and the military.”

“The U.S. Army and NASA continually learn from one another, share great ideas, and join in value added partnership research projects,” added Lackey. “This is a great example of an aligned federal government that optimizes use of precious taxpayer dollars to push multiple national strategy objectives that keep the United States at the forefront of science and engineering advancement; a paramount and critical effort to ensure both national security and global economic dominance endures well into the 21st Century.”

NASA and the Army celebrated their five decades of collaboration in ceremonies at NASA Headquarters in Washington on November 6.