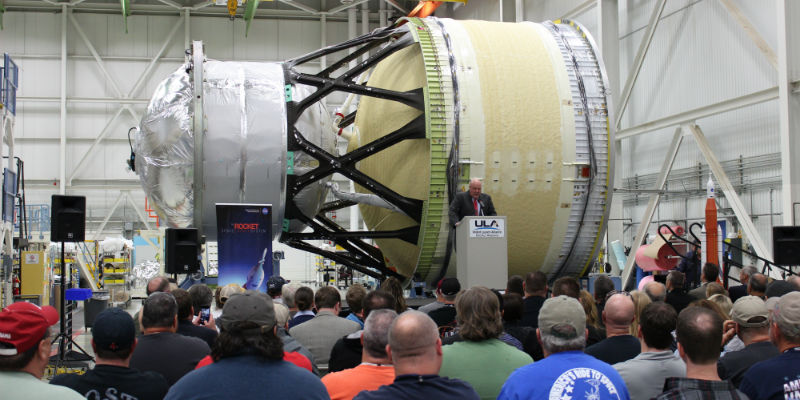 A structural test article of the interim cryogenic propulsion stage (ICPS) for NASA’s new deep-space exploration rocket, the Space Launch System (SLS), has been completed at United Launch Alliance in Decatur, Alabama, prior to handover to the Boeing Company of Chicago. Boeing is the prime contractor for the SLS core stage.

The first flight test of the SLS, called Exploration Mission-1, will feature a Block 1 configuration for a 70-metric-ton (77-ton) lift capability and carry an uncrewed Orion spacecraft beyond low-Earth orbit to test the performance of the integrated system. The ICPS is the liquid oxygen/liquid hydrogen-based system that will give Orion the big, in-space push needed on that mission to fly beyond the moon before it returns to Earth.

Engineers will stack the structural test articles and move the 56-foot-tall structure to a test stand to verify the integrity of the hardware and ensure it can withstand the loads it may experience during flight.

“Not only is the test version of the ICPS complete, but we’ve also started building ICPS hardware for the first flight of SLS,” said Steve Creech, deputy manager of the Spacecraft and Payload Integration & Evolution Office at Marshall, which manages the SLS Program for the agency. “To date, we have fabricated hydrogen tank domes, tank skins and hydrogen tank cylinders. We’re well on our way to being ready for flight.” 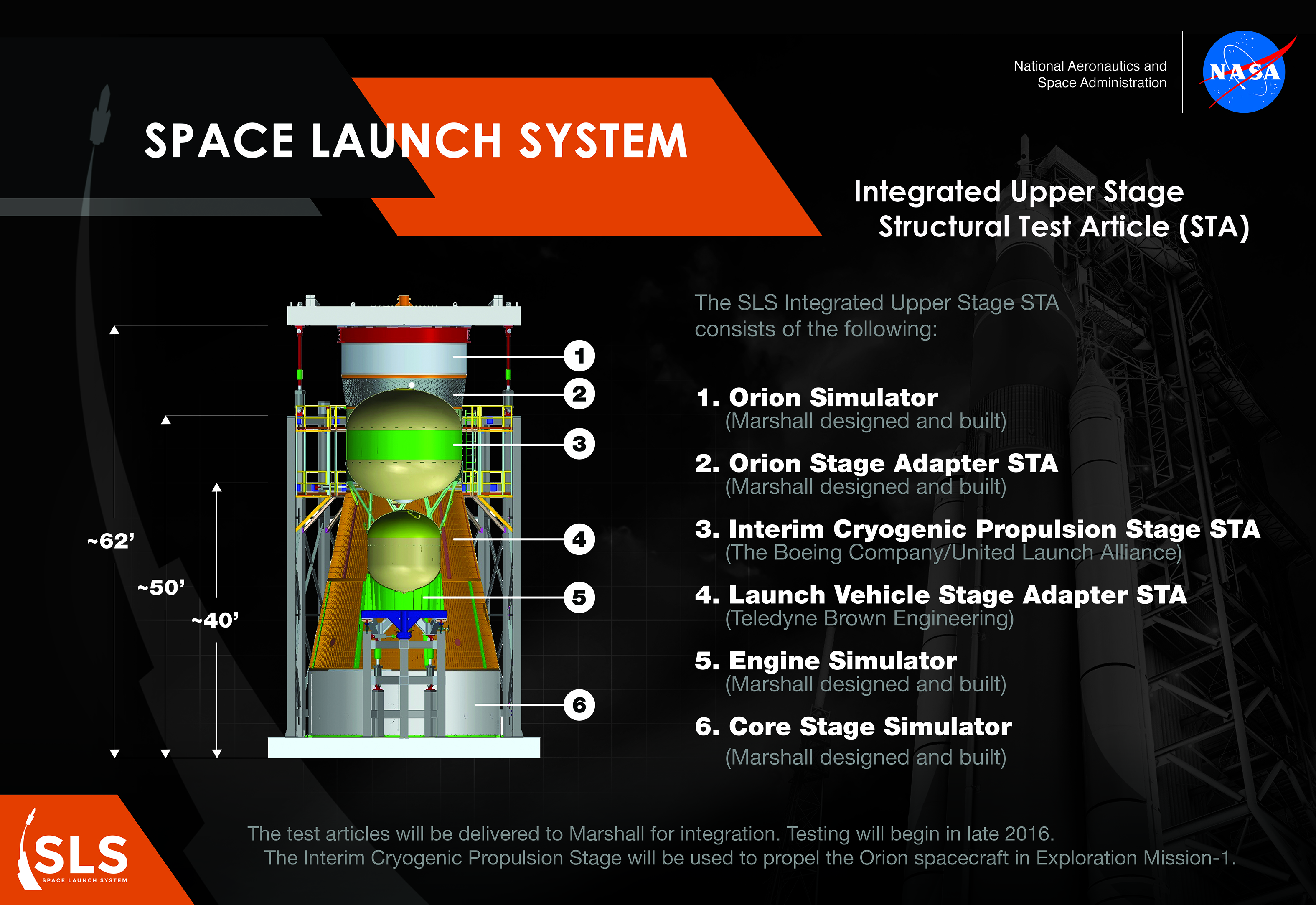 Artist concept of the test articles that replicate the upper portion of the Space Launch System rocket. When completed, the test articles will be stacked and tested at NASA’s Marshall Space Flight Center in Huntsville, Alabama. Image credit: NASA/MSFC

In addition to the ICPS, structural test articles have been completed for:

A structural test article for the launch vehicle stage adapter, which connects the core stage and the upper stage, is currently in production at Marshall.

“ULA is proud to deliver the test article of the ICPS for NASA’s Space Launch System,” said Gary Wentz, ULA vice president, Human Launch Services. “In partnership with Boeing, ULA created the ICPS through modifications made to our existing Cryogenic Second Stage used on the Delta IV launch vehicle. Congratulations to NASA, Boeing and the entire ULA team for reaching this milestone on schedule.”

Modifications to the Delta Cryogenic Second Stage include lengthening the liquid hydrogen tank, adding hydrazine bottles for attitude control and making some minor avionics changes to meet the design parameters and performance characteristics as needed by NASA to meet the flight objectives. An Aerojet Rocketdyne RL-10B2 engine – also currently used on the Delta Cryogenic Second Stage – will power the ICPS.

NASA continues to examine its timeline for evolving SLS toward the Block 1B configuration with a 105-metric-ton (115-ton) lift capability to enable more ambitious missions.

As the SLS evolves, it will ultimately provide an unprecedented lift capability in its Block 2 version capable of lifting 130 metric tons (143 tons) to enable missions even farther into our solar system.