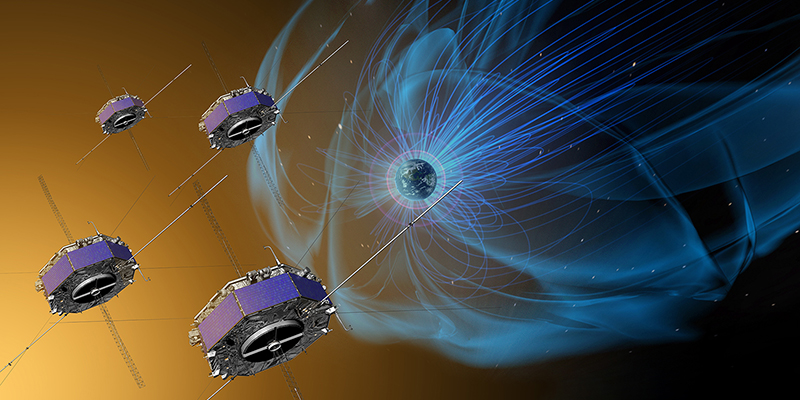 The four Magnetospheric Multiscale, or MMS, spacecraft (shown here in an artist’s concept) have now made more than 4,000 trips through the boundaries of Earth’s magnetic field, gathering observations of our dynamic space environment. Image credit: NASA/Goddard/Conceptual Image Lab

Like sending sensors up into a hurricane, NASA has flown four spacecraft through an invisible maelstrom in space, called magnetic reconnection.

Magnetic reconnection is one of the prime drivers of space radiation and so it is a key factor in the quest to learn more about our space environment and protect our spacecraft and astronauts as we explore farther and farther from our home planet.

Space is a better vacuum than any we can create on Earth, but it does contain some particles — and it’s bustling with activity. It overflows with energy and a complex system of magnetic fields. Sometimes, when two sets of magnetic fields connect, an explosive reaction occurs: As the magnetic fields re-align and snap into a new formation they send particles zooming off in jets.

A new paper printed on May 12, 2016, in Science provides the first observations from inside a magnetic reconnection event. The research shows that magnetic reconnection is dominated by the physics of electrons — thus providing crucial information about what powers this fundamental process in nature.

The effects of this sudden release of particles and energy — such as giant eruptions on the sun, the aurora, radiation storms in near-Earth space, high energy cosmic particles that come from other galaxies — have been observed throughout the solar system and beyond.

But we have never been able to witness the phenomenon of magnetic reconnection directly. Satellites have observed tantalizing glances of particles speeding by, but not the impetus — like seeing the debris flung out from a tornado, but never seeing the storm itself.

“We developed a mission, the Magnetospheric Multiscale mission, that for the first time would have the precision needed to gather observations in the heart of magnetic reconnection,” said Jim Burch, the principal investigator for MMS at the Southwest Research Institute in San Antonio, Texas, and the first author of the Science paper. “We received results faster than we could have expected. By seeing magnetic reconnection in action, we have observed one of the fundamental forces of nature.”

MMS is made of four identical spacecraft that launched in March 2015. They fly in a pyramid formation to create a full 3-D map of any phenomena they observe. On Oct. 16, 2015, the spacecraft traveled straight through a magnetic reconnection event at the boundary where Earth’s magnetic field bumps up against the sun’s magnetic field.

In only a few seconds, the 25 sensors on each of the spacecraft collected thousands of observations. This unprecedented time cadence opened the door for scientists to track better than ever before how the magnetic and electric fields changed, as well as the speeds and direction of the various charged particles.

The science of reconnection springs from the basic science of electromagnetics, which dominates most of the universe and is a force as fundamental in space as gravity is on Earth.

Any set of magnetic fields can be thought of as a row of lines. These field lines are always anchored to some body — a planet, a star — creating a giant magnetic network surrounding it. It is at the boundaries of two such networks where magnetic reconnection happens.

Imagine rows of magnetic field lines moving toward each other at such a boundary. (The boundary that MMS travels through, for example, is the one where Earth’s fields meet the sun’s.) The field lines are sometimes traveling in the same direction, and don’t have much effect on each other, like two water currents flowing along side each other.

But if the two sets of field lines point in opposite directions, the process of realigning is dramatic. It can be hugely explosive, sending particles hurtling off at near the speed of light. It can also be slow and steady. Either way it releases a huge amount of energy.

Whether explosive or steady, the local particles are caught up in the event, hurled off to areas far away, crossing magnetic boundaries they never could have crossed otherwise. At the edges of Earth’s magnetic environment, the magnetosphere, such events allow solar radiation to enter near-Earth space.

“From previous satellites’ measurements, we know that the magnetic fields act like a slingshot, sending the protons accelerating out,” said Burch. “The decades-old mystery is what do the electrons do, and how do the two magnetic fields interconnect. Satellite measurements of electrons have been too slow by a factor of 100 to sample the magnetic reconnection region. The precision and speed of the MMS measurements, however, opened up a new window on the universe, a new ‘microscope’ to see reconnection.”

With this new set of observations, MMS tracked what happens to electrons during magnetic reconnection. As the four spacecraft flew across the magnetosphere’s boundary they flew directly through what’s called the dissipation region where magnetic reconnection occurred. The observations were able to track how the magnetic fields suddenly shifted, and also how the particles moved away.

The observations show that the electrons shot away in straight lines from the original event at hundreds of miles per second, crossing the magnetic boundaries that would normally deflect them.

Once across the boundary, the particles curved back around in response to the new magnetic fields they encountered, making a U-turn. These observations align with a computer simulation known as the crescent model, named for the characteristic crescent shapes that the graphs show to represent how far across the magnetic boundary the electrons can be expected to travel before turning around again.

“The data showed the entire process of magnetic reconnection to be fairly orderly and elegant,” said Michael Hesse, a space scientist at Goddard who first developed the crescent model. “There doesn’t seem to be much turbulence present, or at least not enough to disrupt or complicate the process.”

Spotting the persistent characteristic crescent shape in the electron distributions suggests that it is the physics of electrons that is at the heart of understanding how magnetic field lines accelerate the particles.

“This shows us that the electrons move in such a way that electric fields are established and these electric fields in turn produce a flash conversion of magnetic energy,” said Roy Torbert, a scientist at the Space Science Center at the University of New Hampshire in Durham, who is a co-author on the paper. “The encounter that our instruments were able to measure gave us a clearer view of an explosive reconnection energy release and the role played by electron physics.”

Since it launched, MMS has made more than 4,000 trips through the magnetic boundaries around Earth, each time gathering information about the way the magnetic fields and particles move.

After its first direct observation of magnetic reconnection, it has flown through such an event five more times, providing more information about this fundamental process.

Each set of observations contributes to explaining different aspects of magnetic reconnection. Together, such information will help scientists map out the details of our space environment — crucial information as we journey ever farther beyond our home planet.