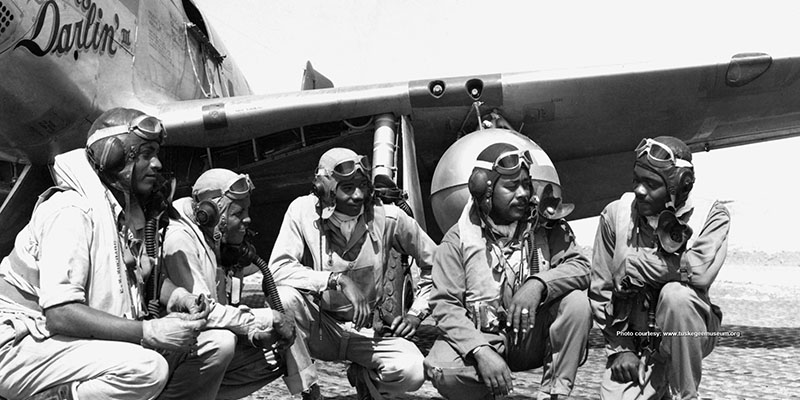 During a week this past summer, a group of underwater explorers embarked on a mission to preserve part of America’s heritage. According to team member and NASA engineer Erik Denson, it was a “mission of a lifetime.”

On Veterans Day, Nov. 11, Americans will pause to honor those who have served in the nation’s military services. Denson and a small team of underwater divers are helping maintain the history of the Tuskegee Airmen.

Formally organized as the 332nd Fighter Wing and the 477th Bombardment Group of the U.S. Army Air Force, the Tuskegee Airmen were the first African-American fighter and bomber pilots. The group also included the navigators, bombardiers, mechanics, instructors, crew chiefs, nurses, cooks and others who supported the airmen. The military pilots trained at Moton Field near Tuskegee, Alabama.

“During World War II, Michigan was home to several African-American air combat units including many graduates of the Tuskegee pilot training program,” Denson said. “Army Air Force pilots were simulating aerial combat and bombing exercises over Lake Huron, as the climate and terrain mimicked what they would see in Europe.”

Due to the realistic nature of such war-time simulations, at least seven pilots of the 332nd Fighter Wing tragically lost their lives while training over water near Michigan. Denson noted that a P-39Q Airacobra fighter plane was found last year by a member of the local county sheriff’s department. The plane was flown by 2nd Lt. Frank Moody, a Tuskegee pilot from Castle, Oklahoma. Moody was killed in the 1944 crash. While his body was quickly recovered, the aircraft was lost.

The plane was found in 30 feet of water at the lower end of Lake Huron north of the city of Port Huron, Michigan. Ironically, the aircraft was discovered April 11, 2014, 70 years to the day after the accident. 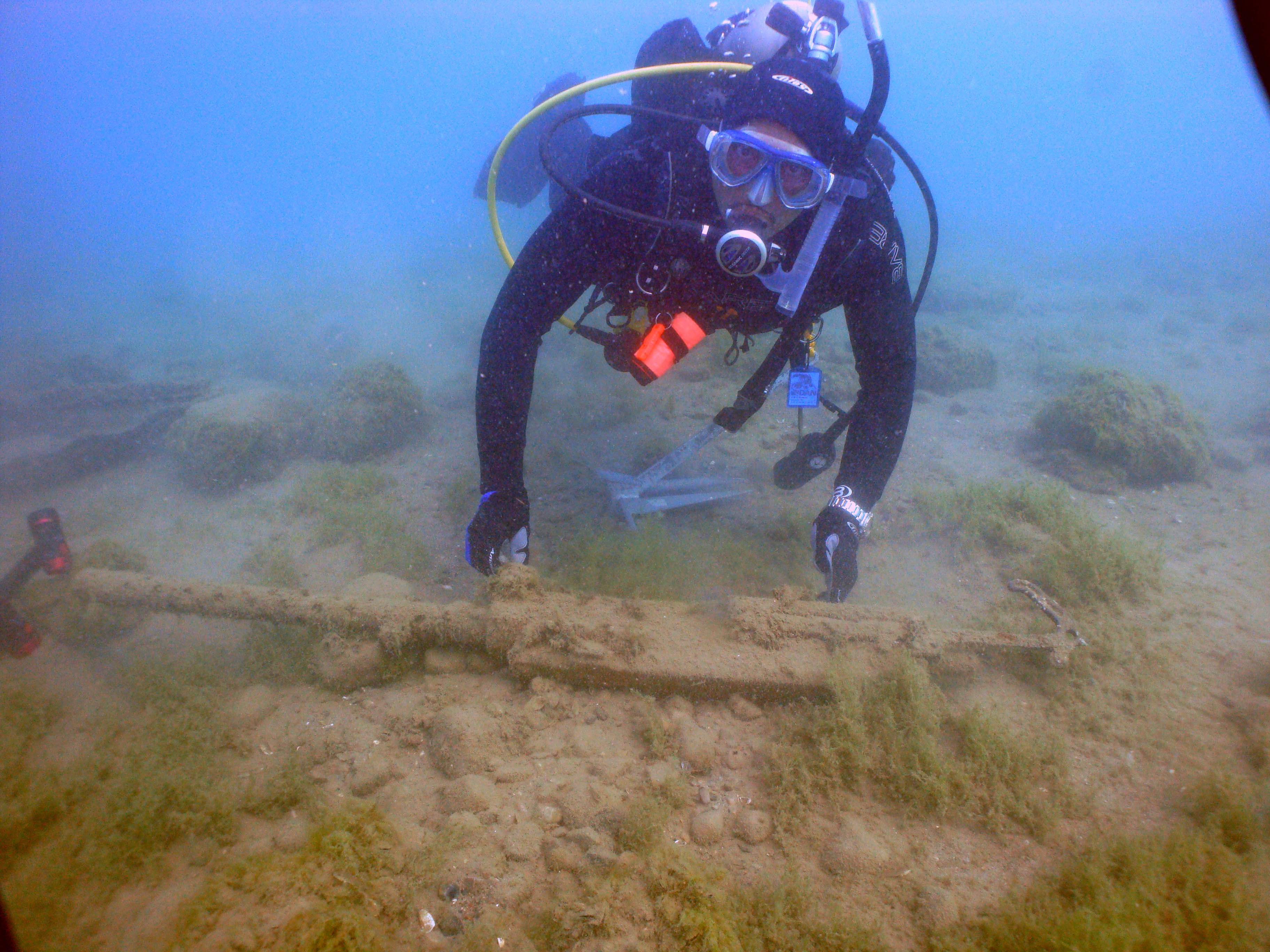 An experienced archeological diver, Erik Denson checks out a machine gun that was part of a P-39 aircraft that crashed during a training exercise in Lake Huron off the coast of Michigan on April 11, 1944. Photo courtesy: Erik Denson. Credits: Courtesy Erik Denson

When NOAA — the National Oceanographic and Atmospheric Administration – issued a request for certified underwater archeologists to survey the site, Denson was quick to volunteer. NOAA is responsible for such expeditions as they provide the principal investigators for studying underwater formations and sunken relics.

“I have drawn inspiration from pioneers of aeronautics such as the Tuskegee Airmen,” Denson said. “So, combining an archeology expedition to study one of their aircraft with my life-long passion for diving was an opportunity I couldn’t pass up.”

While growing up on Long Island, New York, Denson watched Apollo astronauts walk on the moon and a career in aeronautics and space exploration soon became his goal.

“I decided in high school to become an engineer and work in the space program,” he said. 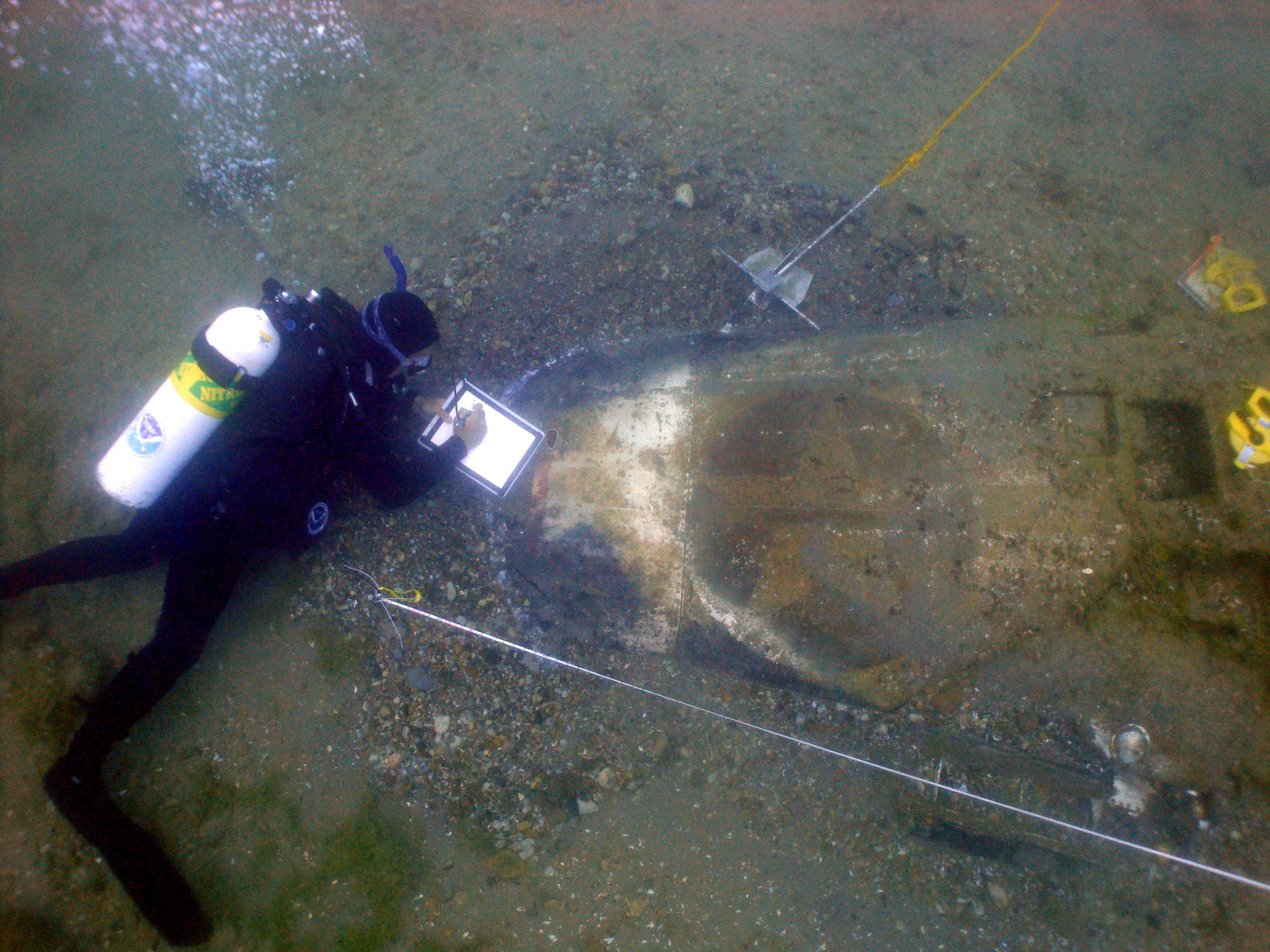 Denson achieved his dream of working for NASA 25 years ago and now is Kennedy’s electrical chief engineer in the spaceport’s Engineering Directorate. Over the years, Denson has worked on projects such as the Operational Intercom System and STARS – the Space-based Telemetry and Range Safety system. He also is currently overseeing the design and development of ground support equipment for the Space Launch System and Orion programs.

Denson’s interest in underwater research stems from his membership in the Diving With a Purpose (DWP) Maritime Archaeology Program.

“Diving With a Purpose is a community-focused non-profit, international organization dedicated to the conservation and protection of submerged heritage resources,” he said. “The organization’s activities provide opportunities for education, training, mission leadership, certification and field experience to adults and youth in the fields of maritime archaeology and ocean conservation.” 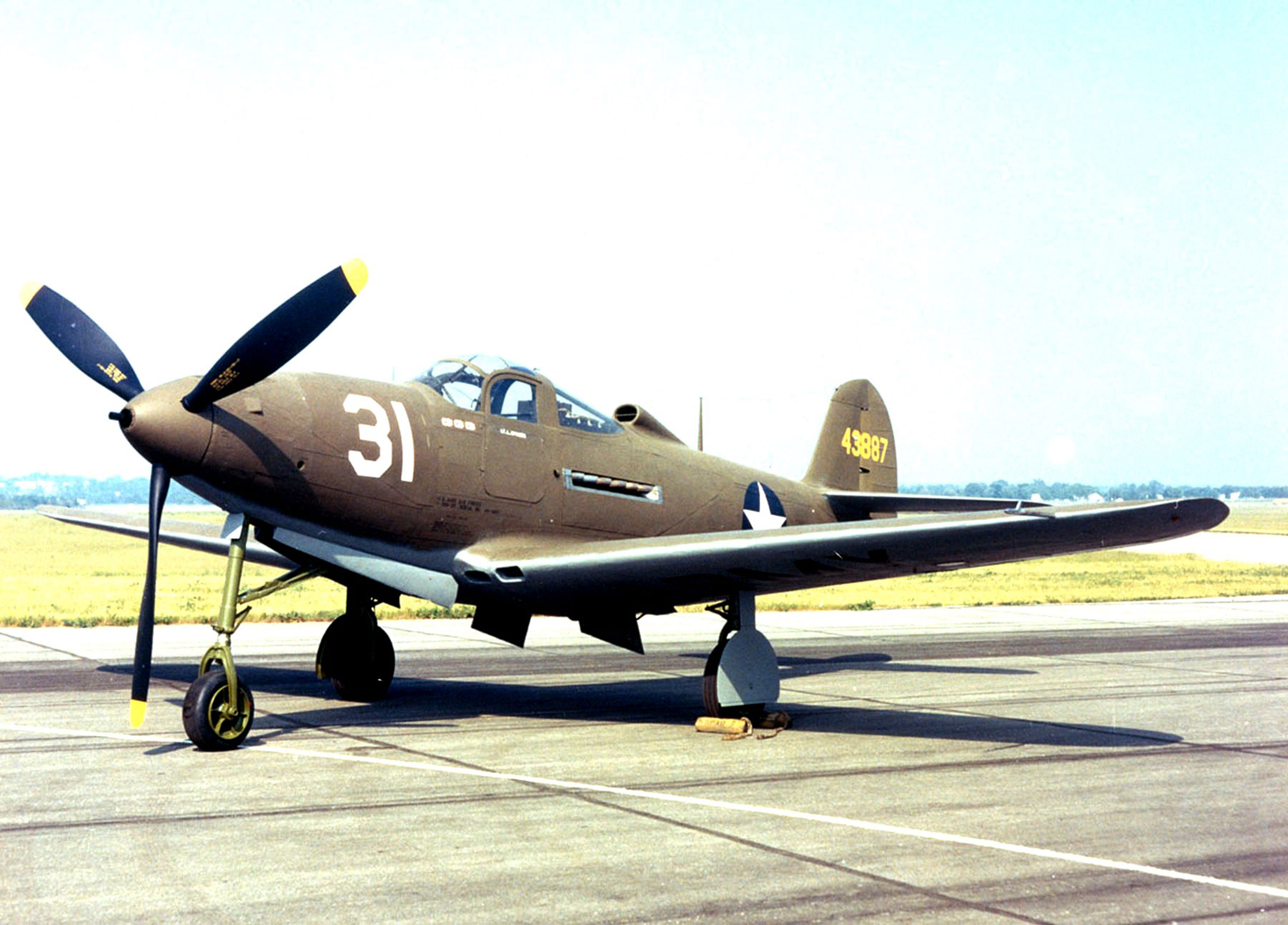 A Bell Aircraft Corp. P-39Q Airacobra similar to the one flown by 2nd Lt. Frank Moody, a member of the Tuskegee Airmen. This aircraft is on display at the National Museum of the United States Air Force at Wright-Patterson Air Force Base near Dayton, Ohio. Credits: U.S. Air Force

In the past, DWP has partnered with the National Park Service to assist in documenting historic shipwrecks in Biscayne National Park, and the slave ship Guerrero. The Spanish vessel sank on a reef near the Florida Keys in 1827.

Between Aug. 9 and 15, 2015, Denson used vacation time to join seven other expert underwater archeologists who surveyed the wreckage of Moody’s P-39 fighter aircraft. In addition to Denson, the team included the expedition’s principal investigator, Wayne Lusardi of NOAA, a Michigan Maritime State Archaeologist. Also participating were four other divers from DWP and one additional from NOAA.

“Our base of operations was the Port Huron Coast Guard Station,” Denson said. “The mission objectives were straight forward and included documenting the aircraft wreckage in its entirety, inventorying and photographing all of the associated aircraft parts, munitions and artifacts.”

The Bell Aircraft Corp. P-39 Airacobra was one of the principal American fighter planes in service when the U.S. entered the Second World War. It also was the primary aircraft used by Tuskegee Airmen training over Lake Huron.

Denson explained that the team spent six days diving and documenting the wreck site which was spread over an area of 500 feet. After being submerged for seven decades, the artifacts were covered with algae and mussels. The wings, engine, propeller and tail section were scattered about 100 feet apart. 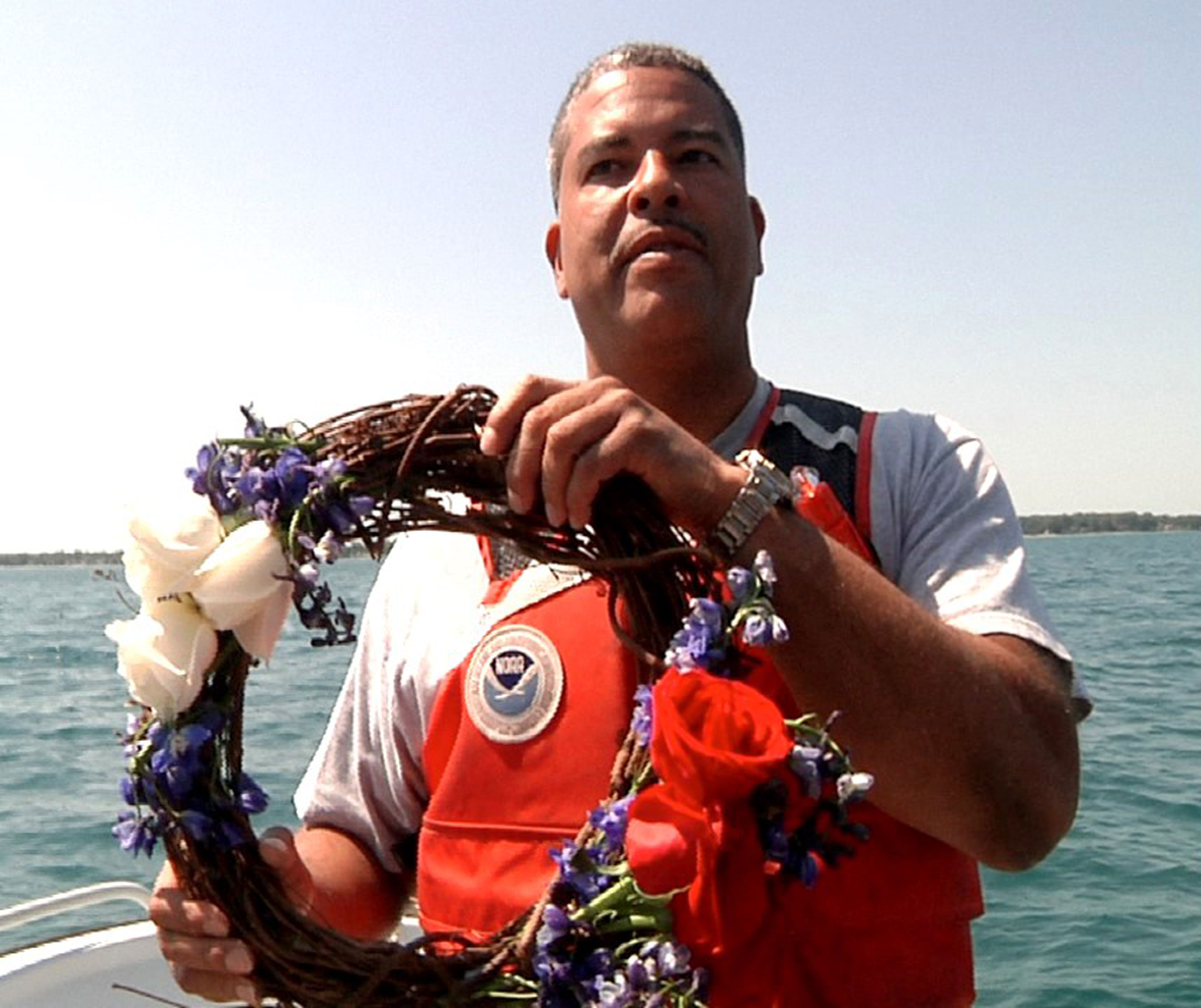 At the conclusion of the expedition, Erik Denson holds a wreath the team placed on the waters of Lake Huron above Lt. Frank Moody’s crash site. “We cannot let the contributions and legacy of the Tuskegee Airmen fade as time passes,” Denson said. “They are true American heroes.” Credits: Courtesy Erik Denson

“The first section of the wreck we documented were the wings,” he said. “As we removed algae, the signature military star became apparent. This sight almost brought tears to my eyes underwater. At this point, I recognized the ultimate sacrifice Lt. Moody and many other Tuskegee Airmen paid for their beliefs and their country.”

When the pilots of the 332nd Fighter Wing painted the tails of their aircraft red, the nickname “Red Tails” was coined and was chosen as the name of the 2012 motion picture about the Tuskegee Airmen. This aspect of the downed fighter plane being studied by Denson caught his attention.

“I could envision the proud red tail of this Tuskegee Airman’s P-39 aircraft flying high,” he said. “Seeing the tail of the plane now protruding from the sand 100 feet from the wings was a sobering sight. Then I envisioned the violence of the crash.”

Denson explained that a few years ago he had an opportunity to attend a Tuskegee Airmen convention and reunion in Orlando.

“I never ask sports figures or entertainers for autographs,” he said. “When I attended the convention, I asked every airman I met for an autograph. They are my heroes.”

At the conclusion of the expedition to study the crash site, the team placed a wreath on the waters of Lake Huron above Moody’s crash site. They also applied to the National Park Service to have the location added to the National Register of Historic Places.

“We cannot let the contributions and legacy of the Tuskegee Airmen fade as time passes,” Denson said.

He explained that he especially appreciated their contributions that provided opportunities for those of future generations, such as himself.

“Lt. Frank Moody and the Tuskegee Airmen sacrificed their lives for their nation and what they believed in even at a time when their nation didn’t believe in them,” he said. “They opened doors and tore down barriers so we could all pursue our dreams. They are true American heroes.”