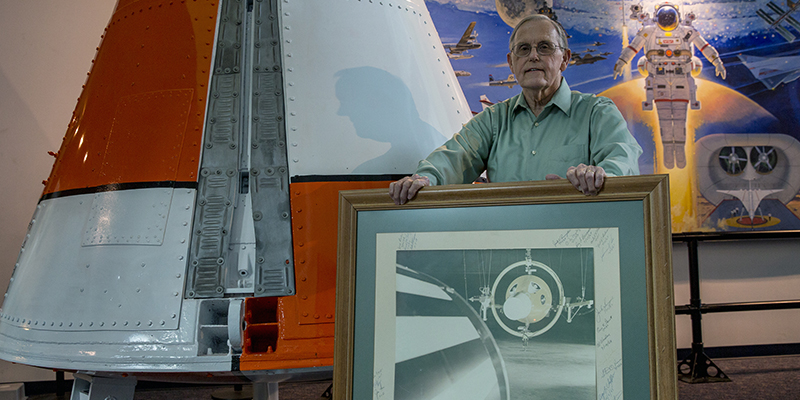 Jack Pennington, a retired engineer who worked with the Rendezvous Docking Simulator at NASA Langley Research Center, poses with a Gemini capsule on display at the Virginia Air & Space Center in Hampton, Virginia. The simulator helped astronauts practice a vital task — linking two spacecraft on orbit. The photo in front of Pennington shows the simulator in action and is signed by astronauts who used the facility including Tom Stafford, Frank Borman and Jim Lovell of Gemini 7 and 6A. Credits: NASA/David C. Bowman

Fifty years ago, the two-tiered NASA mission Gemini 7/6A made history by proving that two independently launched spacecraft — piloted by astronauts — could meet up while orbiting Earth.

Humankind’s first rendezvous in space happened Dec. 15, 1965. While circling the planet, astronauts Walter Schirra and Tom Stafford of Gemini 6A linked with Frank Borman and Jim Lovell of Gemini 7.

The two spacecraft didn’t dock, but maneuvered as close as one foot from each other. In tandem, they flew more than five hours, circling the Earth three and a half times.

“In mission control, the cheering throng of flight controllers waved small American flags, while [NASA leaders] Chris Kraft, Bob Gilruth and others of the jubilant crowd lit cigars and beamed upon this best of all possible worlds,” wrote Barton Hacker and James Grimwood in “On the Shoulders of Titans: A History of Project Gemini.” 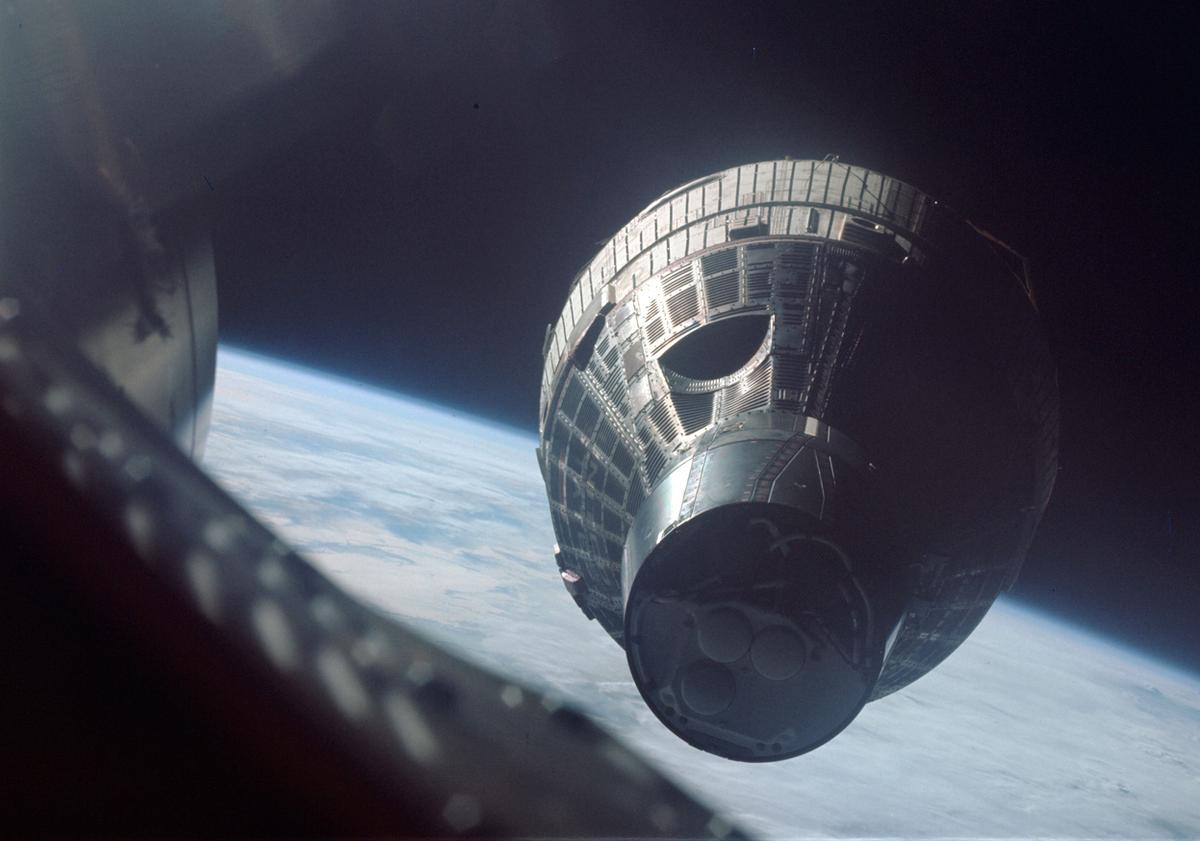 Contributions stretched all the way back to a time when rendezvous was a new idea. In the summer of 1959, NASA Langley’s John Houbolt led two study groups dedicated to figuring out how best to perform a rendezvous in space.

Houbolt would become the agency’s greatest champion of the Lunar Orbit Rendezvous concept, which turned out to be the method NASA used to reach the moon.

NASA Langley also played a part in preparing the Gemini 7/6A astronauts for their historic meeting in space.

Astronauts practiced on the center’s Rendezvous Docking Simulator, an apparatus installed in the rafters of Building 1244, better known as the center’s hangar. The simulator, parts of which can still be seen at the hangar, was added to the National Register of Historic Places in 1985.

“The simulator gave the astronauts the experience of docking spacecraft in a safe, three-dimensional mode that closely approximated a space environment,” reads the National Register nomination. “Training received here and in the Lunar Landing Research Facility was indispensable to accomplishing the goal of landing men on the moon by 1969.”

Full-scale mock-ups of spacecraft cockpits were hung from an overhead carriage and cable-suspended gimbal system. With cables, track, hydraulics and an analog computer, the system allowed a pilot to control the faux spacecraft as if it was moving through space.

Most Gemini training was done at Manned Spacecraft Center (now Johnson Space Center) in Houston, but many astronauts got familiar with rendezvous and docking techniques at NASA Langley. 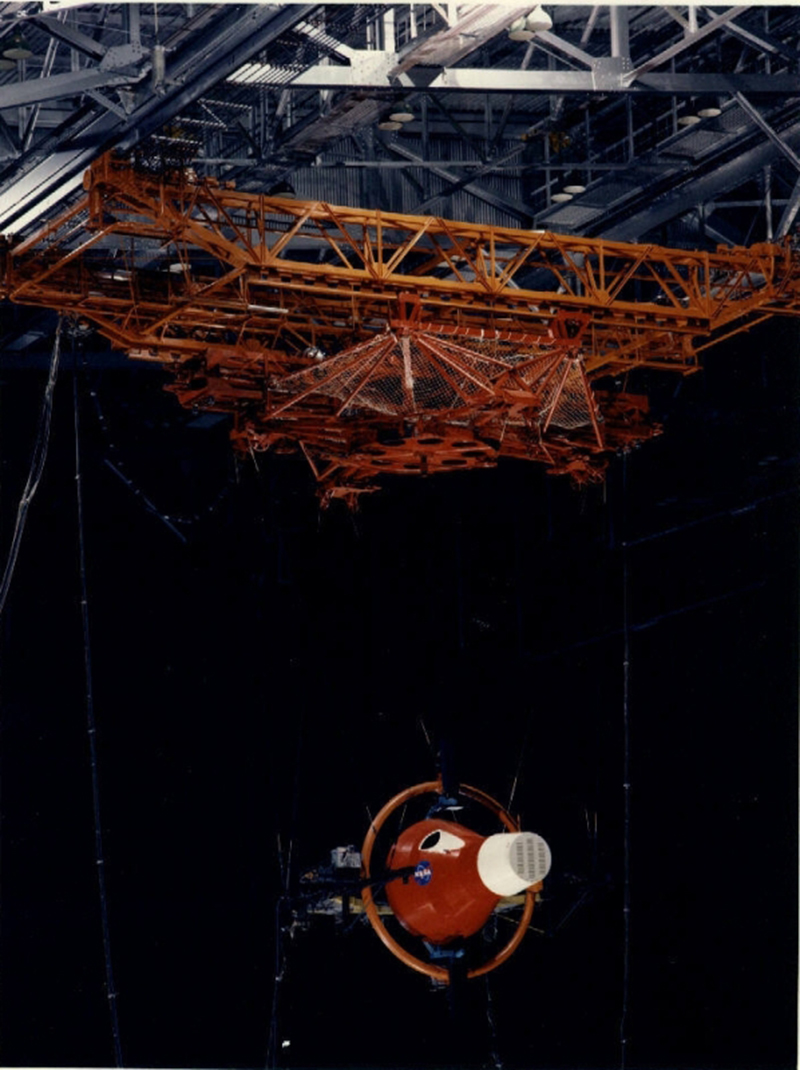 In this NASA archive photo of the Rendezvous Docking Simulator, a mock capsule hangs from the ceiling of the hangar at NASA’s Langley Research Center. Sitting in a cockpit, an astronaut could control the capsule as if traveling through space. Credits NASA

Jack Pennington was assigned to work on the simulator soon after he reported for work at NASA Langley in February 1962. He and his colleagues wrote the mathematical equations and programs that the analog computer used during the practice runs. He continued to work on the Rendezvous Docking Simulator all the way through the Apollo program.

He’s proud of his contributions.

“The Gemini program demonstrated that rendezvous is feasible and safe,” said Pennington, who retired from NASA Langley in 1995.

“I feel fortunate being a part of the NASA team working on the Gemini and Apollo programs. It was an exciting time, with the chance to tackle some difficult problems and opportunities to work with smart, dedicated people. As a young engineer, there were times when you could go home and say, ‘Hey, I even get paid for doing this good, fun stuff!’ ”

Another retired NASA Langley engineer, Hugh Bergeron, helped out with the simulator when practice sessions were taking place. He recalled that astronauts would fly into the center aboard T-38 jets.

“If you saw two or three T-38s parked out there you knew some astronauts were here for simulations,” said Bergeron, who remembers chatting with the astronauts while the system’s computer came on line — a process could take as long as 30 minutes.

“At the time, you didn’t realize the significance of what was going on,” Bergeron said. “Was I excited? That’s too strong. I’m excited now, thinking back about it. At the time, it was just part of a job.” 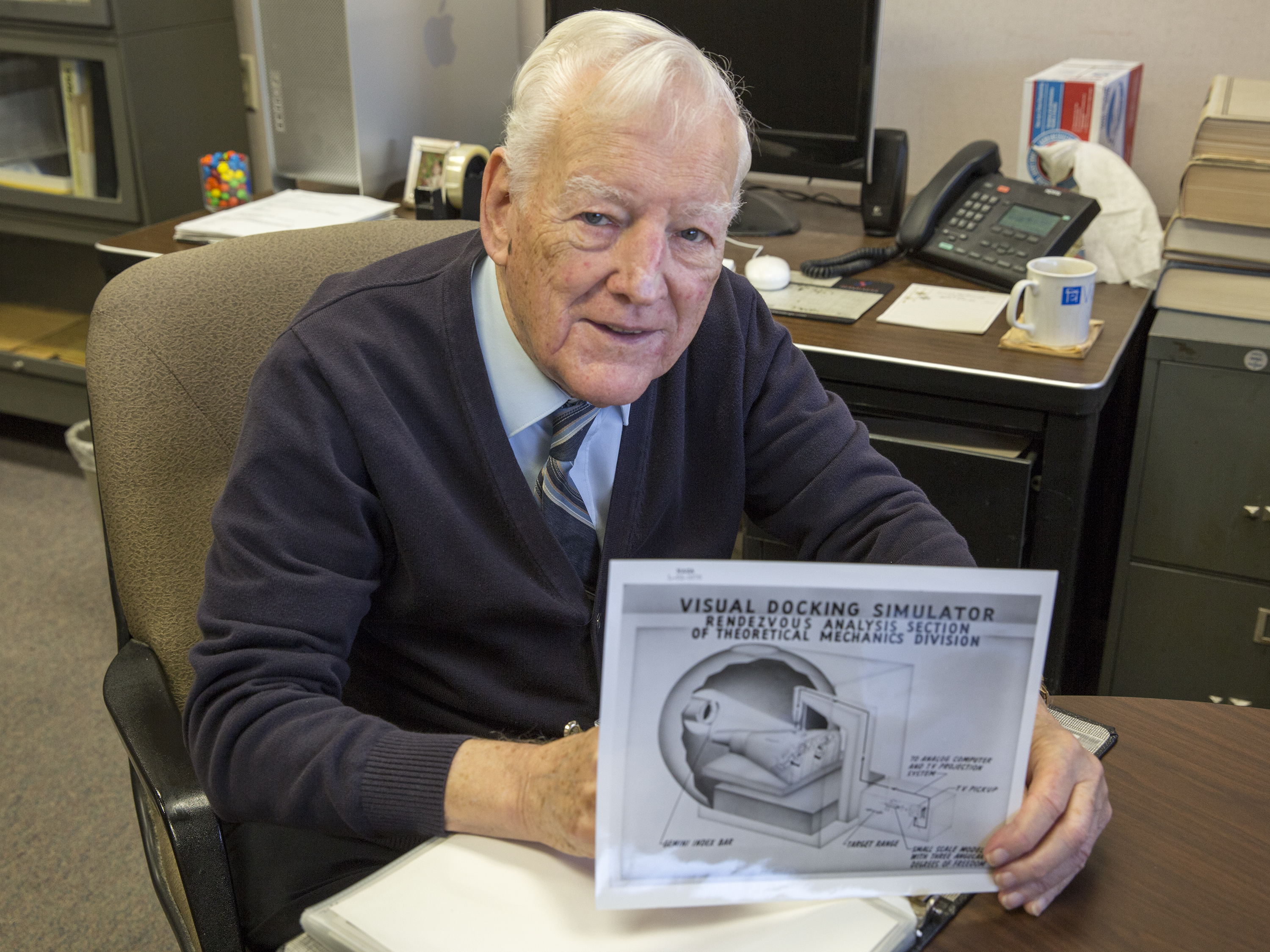 In the 1960s, Don Riley worked on the Visual Docking Simulator, a facility that allowed astronauts to become familiar with docking techniques. Here, he holds a diagram explaining how the simulator worked. At age 88, Riley continues to work at the center as a Distinguished Research Associate. Credits: NASA/David C. Bowman

Don Riley, who arrived at Langley in 1949, built that simulator along with colleagues including Byron Jaquet. Using parts from an F-100 gunnery trainer, they rigged a system that used a television camera, mirrors and a computer to create the illusion that the pilot, sitting in a stationary mock cockpit, was guiding the spacecraft toward a target.

“We didn’t have a real fancy outfit, but it worked,” Riley said. “We used it for a bunch of studies. Several were published as technical notes.”

By 1963, astronauts who visited NASA Langley were using both simulators. Photos from the time show Lovell and others in the cockpit of the Visual Docking Simulator

During one visit, Riley got Stafford’s autograph. “I could have gotten signatures from every one of them, but I didn’t think about doing it,” said Riley, who at age 88 continues to do work at the center as a Distinguished Research Associate.

Thinking back, Riley said he understood the historic significance of his efforts.

“I thought it was great,” Riley said. “We were going to the moon and we were going with Lunar Orbit Rendezvous. This was our thing.”