The eruption of Kilauea Volcano on the island of Hawaii triggered a number of gas- and lava-oozing fissures in the East Riff Zone of the volcano. The fissures and high levels of sulfur dioxide gas prompted evacuations in the area.

Images taken from the Advanced Spaceborne Thermal Emission and Reflection Radiometer (ASTER) onboard NASA’s Terra satellite picked up these new fissures. In the first image, the red areas are vegetation, and the black and gray areas are old lava flows. The yellow areas superimposed over the image show hot spots that were detected by ASTER’s thermal infrared bands. These hot spots are the newly formed fissures and new lava flow as of May 6. In the second photo, also acquired on May 6, the long yellow and green streaks are plumes of sulfur dioxide gas.

On April 30, the floor of Kilauea’s crater began to collapse. Earthquakes followed, including one that measured magnitude 6.9, and lava was pushed into new underground areas that eventually broke through the ground in such areas as the Leilani Estates.

Kilauea is the youngest and southeastern-most volcano on the island. Eruptive activity along the East Rift Zone has been continuous since 1983. Kilauea is one of the world’s most active volcanoes. 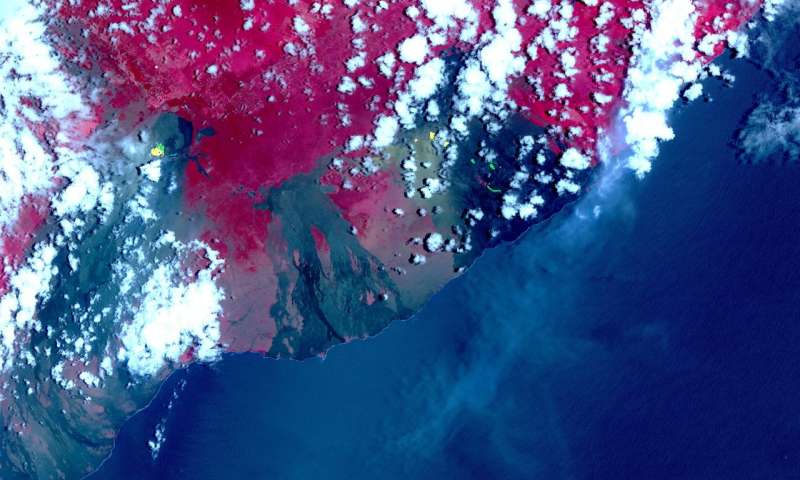