NASA’s Terra satellite passed over the Arabian Sea on Dec. 4 and found Tropical Cyclone Ockhi moving north as desert dust pushed into the region north of the storm.

The Moderate Resolution Imaging Spectroradiometer or MODIS instrument aboard NASA’s Terra satellite provided a visible image of Ockhi on Dec. 4 at 1:20 a.m. EST (0620 UTC). Satellite imagery shows thunderstorms were being pushed to the northeast into the leading edge of an approaching trough (elongated area) of low pressure from the west. That vertical wind shear that’s causing the displacement has been increasing as the tropical cyclone moves north.

At 11 a.m. EST (1500 UTC) the center of Tropical Cyclone Ockhi was located near 15.7 degrees north latitude and 69.1 degrees east longitude. That’s about 1,367 nautical miles west of Diego Garcia. Diego Garcia is an atoll just south of the equator in the central Indian Ocean. Ockhi was moving to the north-northeast at 6 knots (7 mph/11 kph). Maximum sustained winds are near 65 knots (75 mph/120 kph) with higher gusts.

The tropical cyclone is battling wind shear that is forecast to increase over the next two days, and it is moving into an area with dry air. Both factors will weaken the storm, according to the Joint Typhoon Warning Center. Ockhi is expected to continue weakening and become a remnant low pressure area by the time of landfall near the Gulf of Khambhat on Dec. 6. 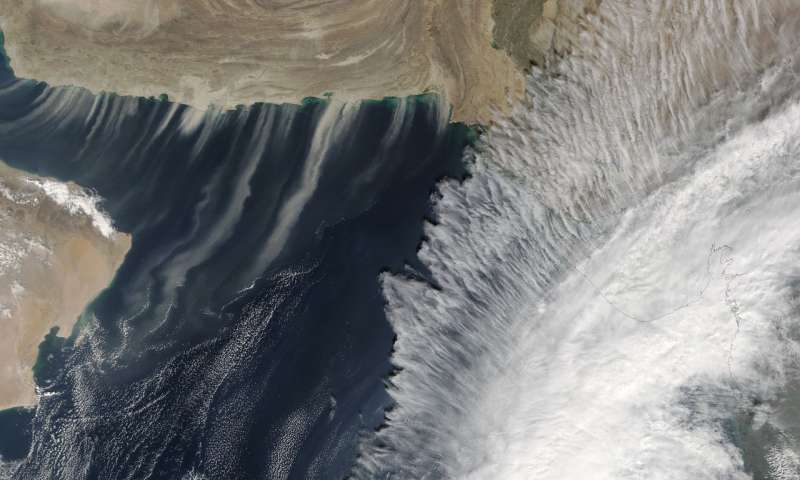