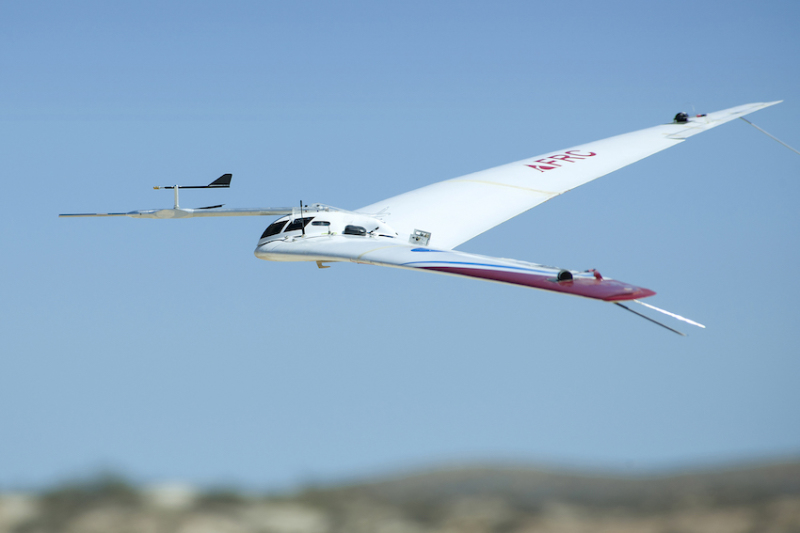 The Prandtl-D No. 2 lands following a flight test. (NASA Photo)

Resembling a boomerang, the aircraft features a new method for determining the shape of the wing with a twist that could lead to an 11-percent reduction in fuel consumption. The concept may also lead to significantly enhanced controllability that could eliminate the need for a vertical tail and potentially to new aircraft designs.

Flight data from the first two Prandtl-D vehicles validated the combination of twist and a lift distribution across the aircraft’s wing – bell shaped rather than the traditional elliptical shape – leads to more efficient flight. In fact, engineers estimate future aircraft could see more than a 30 percent increase in fuel economy by using the new methods of wing design and eliminating the weight of the modern aircraft tail and its flight control surfaces.

In that regard, Prandtl-D research also borrows from how birds fly. Birds turn and bank without vertical tails that are required for such maneuvers on traditional aircraft, but not on the Prandtl aircraft.

The first two subscale Prandtl-D aircraft had a 12.5-foot wingspan and were constructed of a machined foam core wrapped in a skin of carbon fiber. Initially, each aircraft was radio operated with a hobby-grade controller and launched with a bungee cord system. The second aircraft also featured an Arduino flight data system.

The third Prandtl-D aircraft is expected to fly in late 2015 with more than double the wingspan as the earlier versions, measuring 25 feet. The third aircraft also has the same Arduino flight control system as the second Prandtl-D subscale model and is constructed of carbon fiber, fiberglass and foam. Follow on flight tests will switch from a bungee launch method to a towed launch like a glider. Another key difference in the third Prandtl-D is an addition of a University of Minnesota-developed off-the-shelf data collection system.

Flight data also reinforces a number of wing design solutions used on the Prandtl-D aircraft that were an outgrowth of ideas by aeronautical engineer Ludwig Prandtl in the early 20th century. Prandtl was a German whose research is considered a foundation of modern aerodynamics. The Prandtl-D’s designs are also based on glider concepts of German brothers Reimar and Walter Horten and incorporate the conclusions of NASAs aerodynamics pioneers R.T. Jones and Richard T. Whitcomb.

Albion Bowers, NASA Armstrong chief scientist and Prandtl-D project manager, put all the pieces together from the classic aeronautical theorists and has led the NASA effort with help from student interns.

Work on the Prandtl-D led to a concept for a Mars airplane. If the Preliminary Research Aerodynamic Design to Land on Mars, or Prandtl-M aircraft, is successful, it could collect and transmit valuable information back to Earth.

Envisioned with a wingspan of two feet and weighing less than three pounds, the aircraft would be able to deploy, fly in the Martian atmosphere, glide down and land. The Prandtl-M during its flight over Mars could collect very detailed high-resolution topographic images that could tell scientists about the suitability of potential landing sites.

Prandtl-M would have a flight time of about 10 minutes and would be gliding for the last 2,000 feet to the surface of Mars. Its range would be about 20 miles.

If a NASA Armstrong concept for a Mars airplane takes flight, it will be in part thanks to support from college and university student interns.

Their task in the summer of 2015 was to use the skills learned in school and apply those to a research challenge. The two programs included the NASA Flight Scholars, which focuses on giving community college students an early opportunity to perform research, and the Education Small Unmanned Aerial Systems Center of Excellence, which provides college students an opportunity to work on NASA Unmanned Aerial Systems projects. Both were funded primarily under the Minority University Research and Education Program that highlights minority-serving institutions. In addition, the NASA Aeronautics Research Mission Directorate Aeronautics Academy has provided student interns on Prandtl-D and Prandtl-M.

The students started with a boomerang-shaped aircraft constructed of carbon fiber and conducted research by flying it down Armstrong hallways, in a conference room and then in an aircraft hangar. Those flights allowed a look at the aircraft’s aerodynamics before moving on to more complex tests and higher altitudes, resulting in a more delta-shaped aircraft. Student interns also have had roles with all of the Prandtl-D vehicles.

The shape chosen for the Langley-developed Prandtl-D wind tunnel model was based on the first two Prandtl-D vehicles flown at Armstrong. The wind tunnel data showed the wing was very stable.