A series of NASA flight tests has successfully demonstrated technologies that achieve a significant reduction in the noise generated by aircraft and heard by communities near airports.

The Acoustic Research Measurement (ARM) flights, which concluded in May, at NASA’s Armstrong Flight Research Center in California, tested technology to address airframe noise, or noise that is produced by non-propulsive parts of the aircraft, during landing. The flights successfully combined several technologies to achieve a greater than 70 percent reduction in airframe noise.

“The number one public complaint the Federal Aviation Administration receives is about aircraft noise,” said Mehdi Khorrami, an aerospace scientist at NASA’s Langley Research Center in Virginia, and principal investigator for Acoustic Research Measurement. “NASA’s goal here was to reduce aircraft noise substantially in order to improve the quality of life for communities near airports. We are very confident that with the tested technologies we can substantially reduce total aircraft noise, and that could really make a lot of flights much quieter.”

NASA tested several experimental designs on various airframe components of a Gulfstream III research aircraft at Armstrong, including landing gear fairings and cavity treatments designed and developed at Langley, as well as the Adaptive Compliant Trailing Edge (ACTE) wing flap, which had previously been flight-tested to study aerodynamic efficiency. The aircraft flew at an altitude of 350 feet, over an 185-sensor microphone array deployed on the Rogers Dry Lake at Edwards Air Force Base in California.

The Landing Gear Noise Reduction technology element addressed airframe noise caused by airflow moving past the landing gear on approach. The experimental landing gear tested by NASA features fairings that are porous along their front, meaning they consist of many tiny holes that, in part, allow some of the air to flow through the fairing, while also deflecting some of the airflow around the landing gear.

Porous concepts have been studied before, but the unique design developed by NASA resulted from highly detailed computer simulations that led NASA engineers to what they believe is the ideal design for maximum noise reduction without increasing aerodynamic drag. 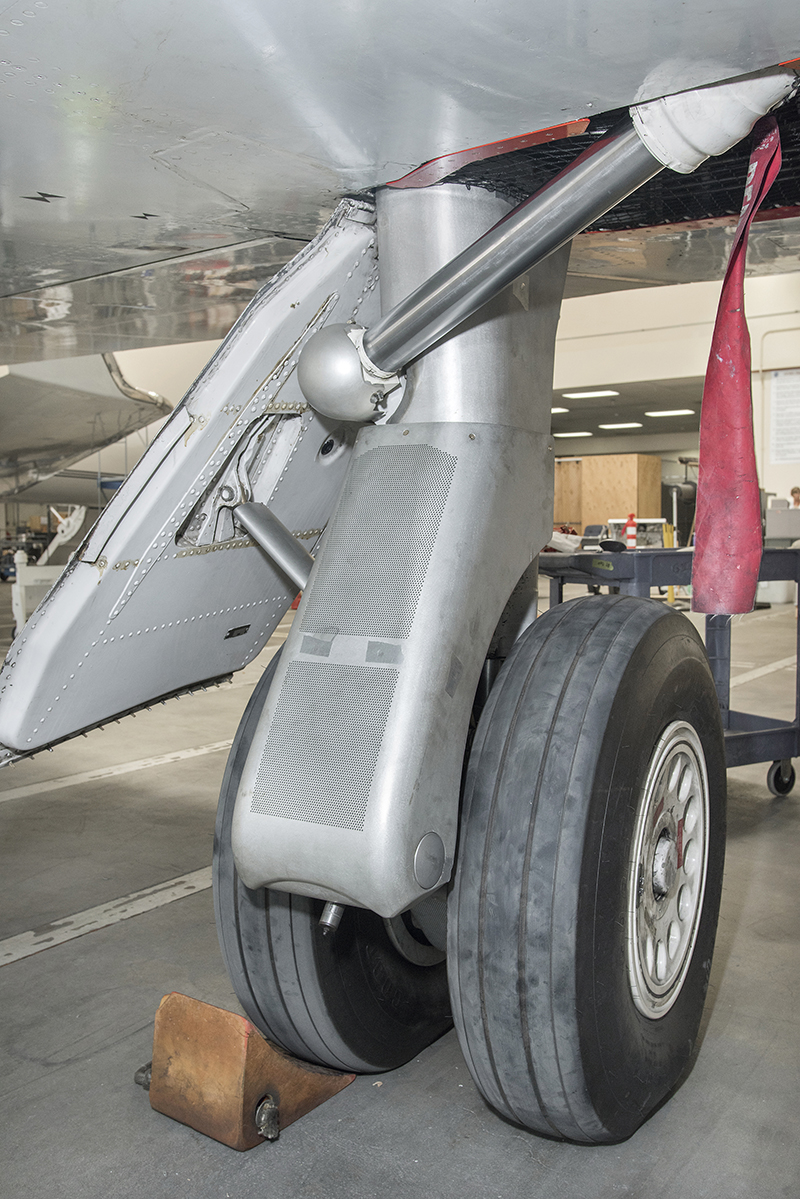 While porous concepts for landing gear fairings have been studied before, NASA’s design was based on extensive computer simulations to produce the maximum amount of noise reduction without the penalty of increasing aerodynamic drag. The landing gear cavity was treated with a series of chevrons near its leading edge, and a net stretched across the opening to alter airflow, aligning it more with the wing. Credits: NASA/Ken Ulbrich

Another area of focus was landing gear cavities, also a known cause of airframe noise. These are the regions where the landing gear deploys from the main body of an aircraft, typically leaving a large cavity where airflow can get pulled in, creating noise. NASA applied two concepts to these sections, including a series of chevrons placed near the front of the cavity with a sound-absorbing foam at the trailing wall, as well as a net that stretched across the opening of the main landing gear cavity. This altered the airflow and reduced the noise resulting from the interactions between the air, the cavity walls, and its edges.

To reduce wing flap noise, NASA used an experimental, flexible flap that had previously been flown as part of the ACTE project, which investigated the potential for flexible, seamless flaps to increase aerodynamic efficiency. As opposed to conventional wing flaps that typically feature gaps between the flap and the main body of the wing, the ACTE flap, built by FlexSys Inc. of Ann Arbor, Michigan, is a seamless design that eliminates those gaps.

Significant reduction in aircraft noise must be realized in order for air transportation growth to maintain its current trend. The reduction of airframe noise using NASA technology is an important achievement in this effort, as it may lead to quieter aircraft, which will benefit communities near airports and foster expanded airport operations.

“This airframe noise reduction produced by NASA technology is definitely momentous, and the best part is that it directly benefits the public,” said ARM Project Manager Kevin Weinert. “While there are obvious potential economic gains for the industry, this benefits the people who live near major airports, and have to deal with the noise of aircraft coming in to land. This could greatly reduce the noise impact on these communities.”