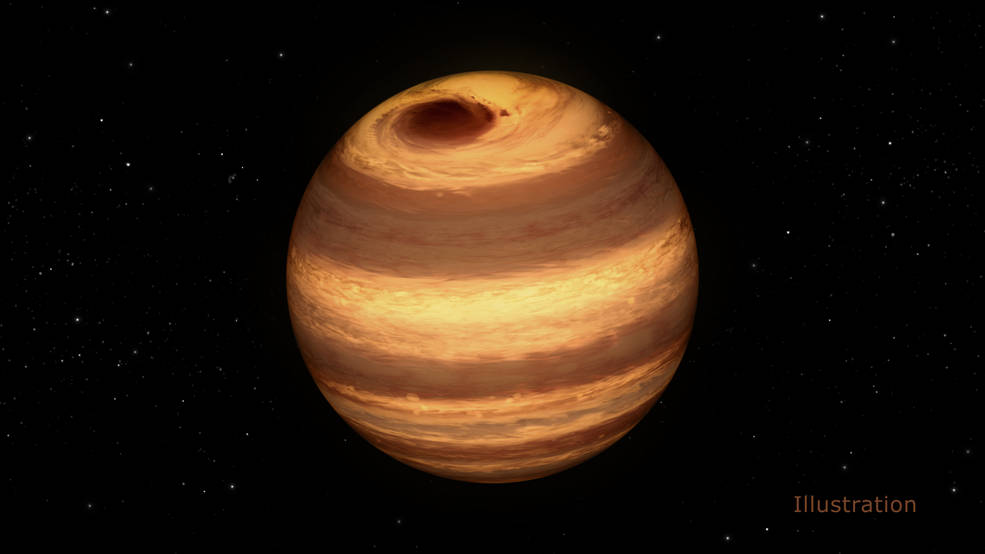 This illustration shows a cool star, called W1906+40, marked by a raging storm near one of its poles. The storm is thought to be similar to the Great Red Spot on Jupiter. Scientists discovered it using NASA’s Kepler and Spitzer space telescopes. Credits: NASA/JPL-Caltech

Astronomers have discovered what appears to be a tiny star with a giant, cloudy storm, using data from NASA’s Spitzer and Kepler space telescopes. The dark storm is akin to Jupiter’s Great Red Spot: a persistent, raging storm larger than Earth.

“The star is the size of Jupiter, and its storm is the size of Jupiter’s Great Red Spot,” said John Gizis of the University of Delaware, Newark. “We know this newfound storm has lasted at least two years, and probably longer.” Gizis is the lead author of a new study appearing in The Astrophysical Journal.

While planets have been known to have cloudy storms, this is the best evidence yet for a star that has one. The star, referred to as W1906+40, belongs to a thermally cool class of objects called L-dwarfs.

Some L-dwarfs are considered stars because they fuse atoms and generate light, as our sun does, while others, called brown dwarfs, are known as “failed stars” for their lack of atomic fusion.

The L-dwarf in the study, W1906+40, is thought to be a star based on estimates of its age (the older the L-dwarf, the more likely it is a star). Its temperature is about 3,500 degrees Fahrenheit (2,200 Kelvin). That may sound scorching hot, but as far as stars go, it is relatively cool. Cool enough, in fact, for clouds to form in its atmosphere.

“The L-dwarf’s clouds are made of tiny minerals,” said Gizis.

In the new study, the astronomers were able to study changes in the atmosphere of W1906+40 for two years. The L-dwarf had initially been discovered by NASA’s Wide-field Infrared Survey Explorer in 2011.

Later, Gizis and his team realized that this object happened to be located in the same area of the sky where NASA’s Kepler mission had been staring at stars for years to hunt for planets.

Kepler identifies planets by looking for dips in starlight as planets pass in front of their stars. In this case, astronomers knew observed dips in starlight weren’t coming from planets, but they thought they might be looking at a star spot — which, like our sun’s “sunspots,” are a result of concentrated magnetic fields. Star spots would also cause dips in starlight as they rotate around the star.

Follow-up observations with Spitzer, which detects infrared light, revealed that the dark patch was not a magnetic star spot but a colossal, cloudy storm with a diameter that could hold three Earths.

The storm rotates around the star about every 9 hours. Spitzer’s infrared measurements at two infrared wavelengths probed different layers of the atmosphere and, together with the Kepler visible-light data, helped reveal the presence of the storm.

While this storm looks different when viewed at various wavelengths, astronomers say that if we could somehow travel there in a starship, it would look like a dark mark near the polar top of the star.

The researchers plan to look for other stormy stars and brown dwarfs using Spitzer and Kepler in the future.

“We don’t know if this kind of star storm is unique or common, and we don’t why it persists for so long,” said Gizis.

JPL manages the Spitzer Space Telescope mission for NASA. Science operations are conducted at the Spitzer Science Center at the California Institute of Technology in Pasadena. Spacecraft operations are based at Lockheed Martin Space Systems Company, Littleton, Colorado. Data are archived at the Infrared Science Archive housed at the Infrared Processing and Analysis Center at Caltech.