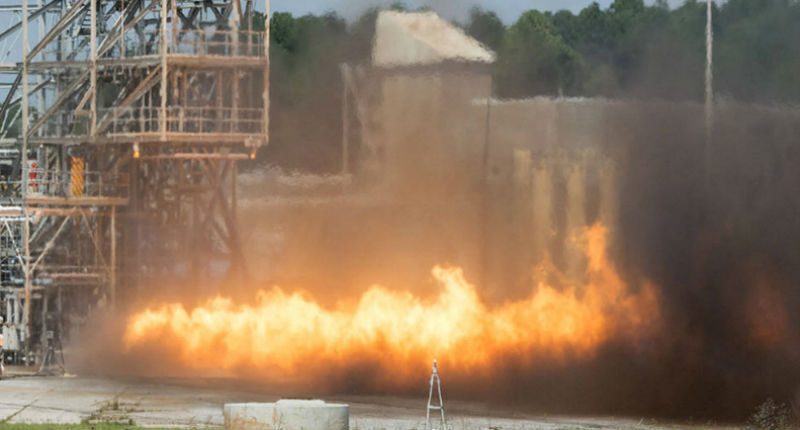 The gas generator to an F-1 engine is test-fired this September at NASA’s Marshall Space Flight Center in Huntsville, Alabama. Image credit: NASA

A key part of the F-1 engine – the rocket engine that propelled the Saturn V and sent men to Moon – just completed a series of tests that will provide new data for today’s rocket engine designers.

While this rocket engine component is not currently being flown, engineers were able to test a 1960’s era rocket engine part, the gas generator, in 2013, and then make one with additive manufacturing and test it on the same stand – giving NASA engineers a direct one-to-one comparison of a key rocket component.

Additive manufacturing layers metallic powders to form engine parts, but much is still unknown about the ability to produce rocket engine parts reliable enough for use on launch vehicles carrying humans.

Over the last few years, NASA engineers have built and tested a variety of complex rocket components manufactured with 3-D printing processes.

The part put to the test in this particular series, a gas generator, supplies power to fuel pump to deliver propellant to the engine.

The gas generator produces around 30,000 pounds of thrust and was fired up on the same test stands at NASA’s Marshall Space Flight Center in Huntsville, Alabama where Protz and his team tested a vintage F-1 gas generator in 2013.

NASA conducted this test series for Dynetics in Huntsville and its partner Aerojet Rocketdyne in Canoga Park, California, who built the gas generator and is examining future technologies and their applicability to future propulsion systems.

The Space Launch System will provide an entirely new capability for human exploration, with the first version of the rocket, referred to as Block 1, capable of launching 70 metric tons to low-Earth orbit.

This first configuration will be powered by twin boosters and four RS-25 engines. The next planned evolution of the SLS, Block 1B, would use a more powerful exploration upper stage to enable more ambitious missions with a 105-metric-ton lift capacity.

Ultimately, a later evolution, Block 2, will add a pair of advanced solid or liquid propellant boosters to provide an unprecedented 130-metric-ton lift capability to enable missions even farther into our solar system, including Mars.

“NASA is exploring many technologies to enhance the Space Launch System as it evolves for use in a variety of missions,” said Sam Stephens, SLS Advanced Development Task Lead at Marshall, where the SLS Program is managed. “If it proves to be a viable option, additive manufacturing may help us build future propulsion systems. With this testing, NASA is helping the community and the nation’s aerospace companies stay at the forefront of advanced technologies.”

Additive manufacturing is one of many technologies that could help provide affordable propulsion systems for the rocket that will take humans on the journey to Mars.

This additive manufacturing test project is one of many projects from industry and academia SLS is funding to inform innovative and affordable solutions to evolve the launch vehicle from its initial configuration to its full lift capacity capable of sending humans farther into deep space than ever before.