NASA’s Lunar Reconnaissance Orbiter (LRO) has spotted the crash site of the Beresheet lander, which confirms its unfortunate demise.

The first privately funded mission to the moon launched February 21 with Israeli non-profit SpaceIL’s Beresheet spacecraft. Thursday, April 11, was the day Beresheet made its descent toward the moon’s surface, broadcasted for all to see during a live stream.

Everything seemed fine up until Beresheet’s final moments, when it ultimately crashed on the surface of the moon. 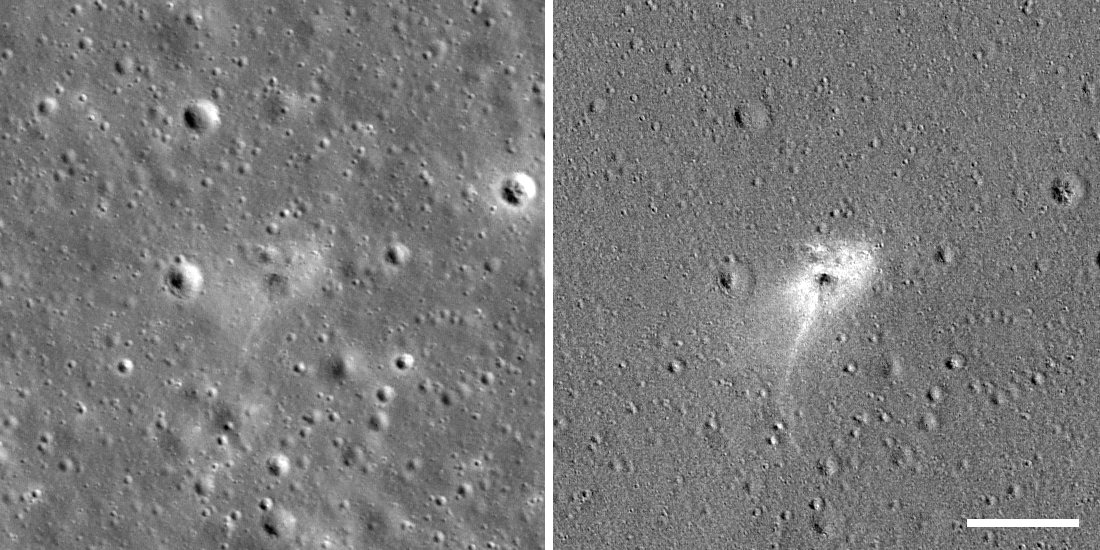 According to an article by Arizona State University’s Lunar Reconnaissance Orbiter Camera (LROC), the spacecraft hit the moon’s surface 1,000 m/s (about 2,237 mph) faster than planned. LROC explains, “The mishap occurred late in the descent profile when the main engine failed—resulting in a very low-angle (<10°), high-speed impact.”

The dark center of the impact is said to be about 10 m (33 ft) across, and is darker than the surrounding area by 10 percent. Currently, a crater isn’t detected, but there could be a number of reasons for this including its small size, the low angle of impact, and the spacecraft’s fragility, among others.

The region circling the darkened impact point, which spans 30 to 50 m (98 to 164 ft) and includes a jettisoned part that extends 100 m (328 ft) southward, is 20 percent brighter than normal. The increased reflectance “was likely caused by gases or very fine high-speed particles rapidly moving away from the impact site, which smoothed the upper layer of regolith and redistributed fine soil particles, which in turn increased reflectance,” according to LROC.

The gif below provides further confirmation, comparing a December 16, 2016 photo of the area with the April 22, 2019 image.

As of right now, investigations are ongoing to figure out exactly what went wrong. However, early reports surfaced that human error may have been the culprit. A command sent by the team may have started a fatal chain reaction that sparked the main engine to fail.

SpaceIL has already announced that the Beresheet 2 mission is currently in the works.