NASA is poised to launch a $337 million washing machine-sized spacecraft that aims to vastly expand mankind’s search for planets beyond our solar system, particularly closer, Earth-sized ones that might harbor life.

The Transiting Exoplanet Survey Satellite, or TESS, is scheduled to launch Monday at 6:32 pm (2232 GMT) atop a SpaceX Falcon 9 rocket from Cape Canaveral, Florida.

Its main goal over the next two years is to scan more than 200,000 of the brightest stars for signs of planets circling them and causing a dip in brightness known as a transit.

NASA predicts that TESS will discover 20,000 exoplanets—or planets outside the solar system—including more than 50 Earth-sized planets and up to 500 planets less than twice the size of Earth.

“They are going to be orbiting the nearest, brightest stars,” Elisa Quintana, TESS scientist at NASA’s Goddard Spaceflight Center, told reporters on Sunday.

“We might even find planets that orbit stars that we can even see with the naked eye,” she added.

“So in the next few years we might even be able to walk outside and point at a star and know that it has a planet. This is the future.”

Just a couple of decades ago, the notion of finding habitable planets—or any planets at all—was a mere fantasy, said Paul Hertz, astrophysics division director at NASA.

“Humans have wondered forever whether we were alone in the universe, and until 25 years ago the only planets we knew about were the eight in our own solar system,” he told reporters on the eve of the TESS launch.

“But since then, we have found thousands of planets orbiting others stars and we think all the stars in our galaxy must have their own family of planets.”

TESS is designed as a follow-on to the US space agency’s Kepler spacecraft, which was the first of its kind and launched in 2009. The aging spacecraft is currently low on fuel and near the end of its life.

Kepler found a massive trove of exoplanets by focusing on one patch of sky, which contained about 150,000 stars like the Sun.

The Kepler mission found 2,300 confirmed exoplanets, and thousands more candidate planets. But many were too distant and dim to study further.

TESS, with its four advanced cameras, will scan an area that is 350 times larger, comprising 85 percent of the sky in the first two years alone.

“By looking at such a large section of the sky—this kind of stellar real estate—we open up the ability to cherry-pick the best stars to do follow-up science,” said Jenn Burt, a postdoctoral fellow at the Massachusetts Institute of Technology (MIT).

TESS uses the same method as Kepler for finding potential planets, by tracking the dimming of light when a celestial body passes in front of a star.

The next step is for ground-based and space telescopes to peer even closer.

The Hubble Space Telescope and the James Webb Space Telescope, scheduled to launch in 2020, should be able to reveal more about planets’ mass, density and the makeup of their atmosphere—all clues to habitability.

“TESS forms a bridge from what we have learned about exoplanets to date and where we are headed in the future,” said Jeff Volosin, TESS project manager at NASA’s Goddard Spaceflight Center.

By focusing on planets dozens to hundreds of light-years way, TESS may enable future breakthroughs, he said.

“With the hope that someday, in the next decades, we will be able to identify the potential for life to exist outside the solar system.”

Weather was expected to be 80 percent favorable for launch. 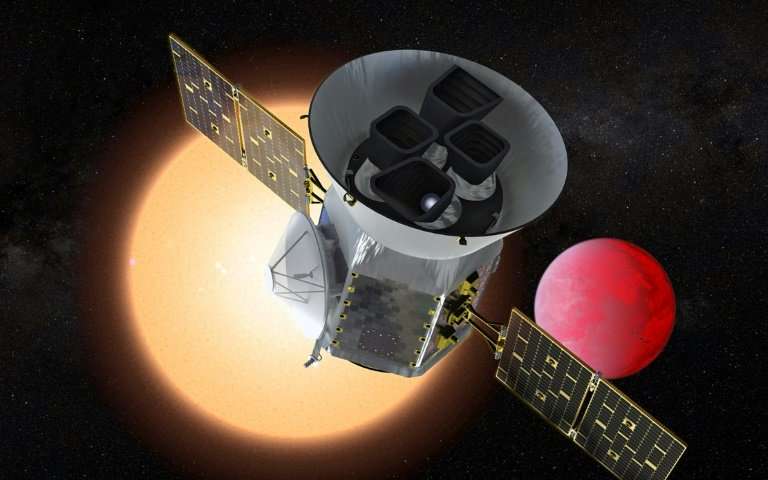