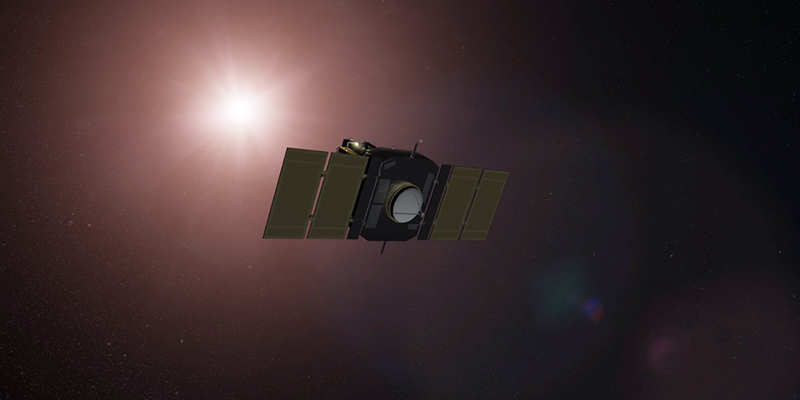 After 20 years in space, ESA and NASA’s Solar and Heliospheric Observatory, or SOHO, is still going strong.

Originally launched in 1995 to study the sun and its influence out to the very edges of the solar system, SOHO revolutionized this field of science, known as heliophysics, providing the basis for nearly 5,000 scientific papers.

SOHO also found an unexpected role as the greatest comet hunter of all time—reaching 3,000 comet discoveries in September 2015.

When SOHO was launched on Dec. 2, 1995, the field of heliophysics looked very different than it does today. Questions about the interior of the sun, the origin of the constant outflow of material from the sun known as the solar wind, and the mysterious heating of the solar atmosphere were still unanswered.

Twenty years later, not only do we have a much better idea about what powers the sun, but our entire understanding of how the sun behaves has changed.

“SOHO changed the popular view of the sun from a picture of a static, unchanging object in the sky to the dynamic beast it is,” said Bernhard Fleck, ESA SOHO project scientist at NASA’s Goddard Space Flight Center in Greenbelt, Maryland.

Even the concept of space weather—now defined to encompass any events or conditions stemming from the sun that can affect space-borne and ground-based technological systems and through these, human life and endeavors—wasn’t well-understood when SOHO launched.

At the time, it was thought that solar flares were the primary Earth-effective solar event, in part because they were the most commonly-observed.

Thanks to SOHO’s coronagraph—a type of camera that uses a solid disk to block out the bright face of the sun to better observe the comparatively faint solar atmosphere, known as the corona—today we know that giant clouds that burst off the sun called coronal mass ejections, or CMEs, are a major piece of the space weather puzzle.

Though two space-based coronagraphs preceded the one on SOHO, neither provided the same quantity or quality of observations.

“Many faint CMEs had escaped notice on older coronagraphs,” said Joe Gurman, US project scientist for SOHO at Goddard. “In light of the SOHO data, we realized CMEs are much more common—and more variable throughout the solar cycle—than we thought.”

CMEs, which are huge, fast-moving clouds of electrically-charged solar material that contain embedded magnetic fields, can cause geomagnetic storms when they collide with Earth’s magnetic field, causing it to shimmy and shake.

The ability to connect the effects of geomagnetic storms—like auroras, GPS and communication disturbances, and geomagnetically induced currents, which can put a strain on power grids—to events on the sun has brought the idea of space weather into the mainstream.

“Thanks to SOHO, there’s a growing public recognition that we live in the extended atmosphere of a magnetically active star,” said Gurman. “And people realize that solar activity can affect Earth.”

This image of a coronal mass ejection, or CME, was taken by NASA’s Solar and Heliospheric Observatory, or SOHO, on March 5, 2013. This event is a halo CME, named for the way the glowing cloud of solar material spreads out in a faint circle around the sun’s disk. Before SOHO discovered the solar tsunamis that often happen in close conjunction with CMEs, scientists generally had no way of knowing if a halo CME was heading directly toward or directly away from Earth. The large, bright spot in the lower right of the image is Venus. Credits: ESA/NASA/SOHO

But SOHO’s coronagraph wasn’t the only game-changing instrument. Before SOHO launched, carrying the Extreme ultraviolet Imaging Telescope, or EIT, the only cameras taking images of the sun in extreme ultraviolet light—which Earth’s atmosphere blocks, making it impossible to observe from the ground—were on suborbital sounding rockets, which collect data for only minutes at a time.

“For the first time ever, we saw waves rippling across the sun at a million miles an hour in extreme ultraviolet light,” said Alex Young, a space scientist at Goddard.

These tsunamis on the solar surface—still known by many as EIT waves, after the instrument that first observed them—happen in close conjunction with CMEs.

Before the discovery of solar tsunamis, scientists often had no way of knowing if a CME was heading directly toward or directly away from Earth, since all CMEs on the Earth-sun line simply appear in coronagraph images as a giant halo around the sun.

This animation shows a solar tsunami—also known as an EIT wave, after SOHO’s Extreme ultraviolet Imaging Telescope, which took the first images of these events—expanding out from an active region just after a solar flare on July 14, 2000. Solar tsunamis, which often happen in conjunction with coronal mass ejections, or CMEs, gave scientists the first clues as to whether halo CMEs—which spread out all around the sun in coronagraph images—were heading directly toward or away from Earth. Credits: ESA/NASA/SOHO

Scientists almost missed out on this and SOHO’s other discoveries. In 1998, the spacecraft was lost for four months because of a software error.

A joint ESA/NASA team was finally able to recover the spacecraft in September 1998, in part using the giant Arecibo radio telescope to locate the spacecraft and reestablish command.

This rescue was crucial for heliophysics, as much of SOHO’s scientific success can be attributed to its 20 years of near-constant observation.

“With SOHO, we found that the sun varies on every timescale we can measure,” said Gurman. “Whether it’s 20 years or just a few milliseconds, we discover new phenomena.”

Though it expanded our knowledge of every facet of heliophysics, SOHO was launched to answer three primary questions. First—what is the interior structure of the sun?

Though scientists had developed theories about the layers of ionized gas and complex magnetic field that compose our nearest star, they had no way of confirming their ideas other than by observing the sun’s surface. But SOHO carries onboard an instrument that can take a kind of solar sonogram, helping researchers understand the sun’s internal structure.

“Getting an accurate picture of the interior structure of the sun confirmed our theories about the number of neutrinos it emits,” said Fleck. “That proved the solar neutrino problem came from a misunderstanding of neutrinos themselves—not the sun.”

It was later discovered that neutrinos can undergo a change of type in their journey from the sun, accounting for the difference between predictions and observations. This research won the Nobel Prize in Physics in 2015.

The second question SOHO was designed to answer was that of solar wind acceleration. The sun is constantly losing material in all directions, but the speed of that flowing material—known as the solar wind—is much higher than one would expect from a relatively simple view of the sun.

SOHO’s observations showed how some of the fastest solar wind streams are accelerated in coronal holes, areas on the sun where the magnetic field is open to interplanetary space.

As of yet, no one has managed to definitely answer SOHO’s third question—what causes the extraordinarily high temperatures in the sun’s atmosphere, the corona?

“The corona is incredibly hot, hundreds of times hotter than the layers below,” said Fleck. “Since the sun’s source of energy is at the center, on a simple level, we would expect the corona—the outermost layer—to be the coolest.”

Though SOHO’s observations have provided the basis for many possible explanations for the coronal heating problem, as it’s known, it still hasn’t been settled. However, NASA’s Solar Probe Plus mission, planned for launch in 2018, will fly closer to the sun than any other spacecraft in order to investigate this very question.

Solar Probe Plus is one of many missions that has been shaped by SOHO and its discoveries. Others include NASA’s Solar Dynamics Observatory, NASA’s Solar and Terrestrial Relations Observatory, and NASA’s Interface Region Imaging Spectrograph, and JAXA/NASA’s Hinode.

“Without SOHO, there would be no SDO, no STEREO, no IRIS, no Hinode,” said Young. “SOHO showed us things we’d never seen before, and then we realized we needed more eyes on the sun.”