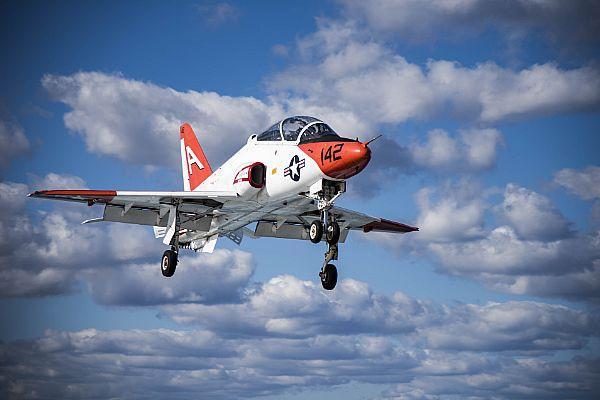 The U.S. Navy ban on T-45 pilot training flights is being lifted Monday but with a new altitude restriction in place, the Navy announced.

The pilot trainer will now fly below 10,000 feet to avoid the use of the aircraft’s On Board Oxygen Generator System as authorities continue to investigate the causes of physiological episodes experienced in the cockpit by aircrew.

Air crew will also wear a modified mask that circumvents the OBOGS system.

“After briefings and discussions with our aircrew, their training wing leadership, the engineers, and aeromedical experts, we have identified a way forward to resume flight operations safely by limiting the maximum cabin altitude to below 10,000 feet in order be able to operate without using the OBOGS system,” Naval Air Forces Commander Vice Adm. Mike Shoemaker said in a press release. “We will be able to complete 75 percent of the syllabus flights with the modified masks while we continue the important engineering testing and analysis at PAX River [Naval Air Station Patuxent River, Md.] to identify the root cause of the problem.

“This will remain our top safety priority until we fully understand all causal factors and have identified a solution that will further reduce the risks to our aircrew.”

Training flights using the T-45C from Naval Air Stations in Florida and Mississippi were canceled late last month amid reports from instructor-pilots on incidents of physiological problems while in the cockpit. A pause on operation was later imposed for a minimum of a week.

The Navy said instructor pilots will now initially conduct warm-up flights, after which they will brief the remaining pilots and students in their squadron on using the modified equipment.

The Navy is working with outside agencies, NAVAIR, flight surgeons, physiologists and toxicologists as it attempts to find the main cause of the physiological problems reported.