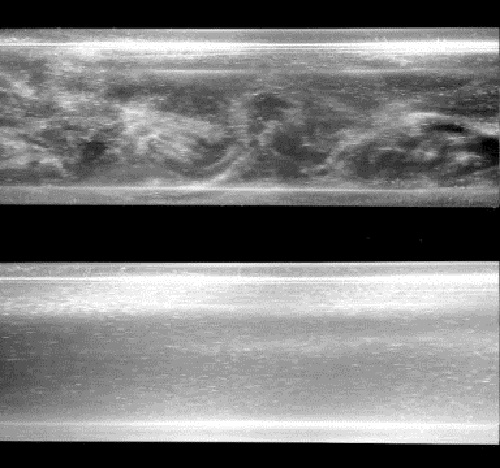 Until now it had been assumed that, once a flow of a fluid has become turbulent, turbulence would persist. Researchers at the Institute of Science and Technology Austria (IST Austria) including Professor Björn Hof and co-first authors Jakob Kühnen and Baofang Song have now shown that this is not the case. In their experiments, which they published in Nature Physics, they managed to destabilize turbulence in a pipe so that the flow turned to a laminar (non-turbulent) state, and they observed that the flow remained laminar thereafter. Eliminating turbulence can save as much as 95% of the energy required to pump a fluid through a pipe.

From water to oil and to natural gas an enormous amount of fluids is transported across the globe through pipes. The amount of energy used to pump these fluids is considerable and corresponds to approximately 10% of the global electricity consumption. It therefore does not come as a surprise that researchers worldwide are working intensely on finding ways to reduce these costs. The major part of these energy losses is caused by turbulence, a phenomenon that leads to a drastic increase of frictional drag and hence much more energy is required to pump the fluid. Previous approaches have aimed to locally reduce turbulence levels. Now the research group of Björn Hof at IST Austria has taken an entirely new approach, tackling the problem from a different side: rather than temporarily weakening turbulence, they managed to destabilize existing turbulence so that the flow automatically becomes laminar.

In a so-called laminar flow, a fluid flows in parallel layers which do not mix. The opposite of this is a turbulent flow which is characterized by vortices and chaotic changes in pressure and velocity within the fluid. Most flows that we can observe in nature and in engineering are turbulent, from the smoke of an extinguished candle to the flow of blood in the left ventricle of our heart. In pipes, both laminar and turbulent flows can in principle exist and be stable, but already a small disturbance can make a laminar flow turbulent. Turbulence in pipes was until now assumed to be stable, and efforts to save energy costs therefore only focused on reducing its magnitude but not to completely extinguish it. In their proof of principle, Björn Hof and his group have now shown that this assumption was wrong, and that a turbulent flow can indeed be transformed to a laminar one. The flow thereafter remains laminar unless it is disturbed again.

“Nobody knew that it was possible to get rid of turbulence in practice. We have now proven that it can be done. This opens up new possibilities to develop applications for pipelines,” explains Jakob Kühnen.

The secret lies in the velocity profile, i.e., in the variation of the flow velocity when looking at different positions in the pipe’s cross section. The flow is fastest in the middle of the pipe while it is much slower near the walls. By placing rotors in the flow that reduced the difference between the fluid in the center and that close to the wall, the researchers managed to obtain a “flatter” profile. For such flow profiles the processes that sustain and create turbulent eddies fail and the fluid gradually returns to smooth laminar motion and it remained laminar until it reached the end of the pipe. Another way to obtain the flat velocity profile was to inject liquid from the wall. Yet another implementation of the idea of a flat velocity profile was a moving part of the pipe: by moving the walls quickly over a stretch of the pipe, they also obtained the same flat profile that restored the laminar flow.

The group has already registered two patents for their discovery. However, turning this proof of concept experiment into a system that can be used in actual oil or water pipelines all over the world will require some more efforts in development. So far, the concept was proven for relatively small velocities, but for use in pipelines, an application working at larger velocity will be necessary. In computer simulations, however, the flat velocity profile always led to a successful elimination of turbulence, which is very promising for future developments.

“In computer simulations, we have tested the impact of the flat velocity profile for Reynolds numbers up to 100,000, and it has worked absolutely everywhere. The next step is now to make it work also for high speeds in the experiments,” says Björn Hof.